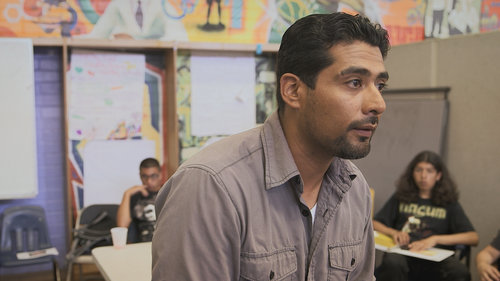 “I was in prison before I was even born.”

So begins the inspirational story of Oakland native Victor Rios, former dropout and gang member, now a UC professor, who trains educators to help students who are at risk of being ‘pushed out’ of the school system.

Dr. Victor Rios was a high school dropout by age 15, with three felony convictions and a death wish. When a teacher’s quiet persistence, a mentor’s moral conviction, and his best friend’s murder converge, Rios’s path takes an unexpected turn.

When the film begins in 2013, Victor Rios had turned his life around, and was a professor at UC Santa Barbara. Rios was challenged by his high school mentor, Martin Flores, a UC student and La Raza organizer, to lead an intensive six-week program for youth in south-central LA. Flores instructed him to “bring a team of super mentors”. After some soul searching, Rios agreed, and his life changed.

Referred to as “dropouts” in national statistics, many of these youth are actually “pushouts” trying to stay enrolled against the odds.

The Pushouts brings to life stories of Latino and Black students who too often find themselves pushed out of high school and towards gang life and incarceration, in the “school to prison pipeline.”

Director Katie Galloway grew up in 1970s Oakland in racially diverse public schools, until high school. When “white flight” was rampant, she became one of four remaining white students, and was tracked into the “pushouts” classes.

Finally, one night, as a dropout, she stumbled onto a talk given by the Center for Investigative Reporting. Ms. Galloway says that she “caught on fire that night and began a thirty-year career in print, radio, and film, covering criminal justice almost exclusively.”

Co-Director Dawn Valdez was raised in Los Angeles by poor working-class parents who were “pushed out” before ever attending high school. As a social worker and filmmaker, Ms. Valdez reveres the mentors and teachers who helped carve a path to her own completion of high school, college and graduate school. Her direct-service work with young people and families has contributed to her belief that every child deserves teachers and mentors who believe in them, and that they deserve a great public education.

Please join us for The Pushouts, a compelling documentary which illuminates the unique potential of each young person, the importance of community solutions, and the impact of strong teachers and mentors.