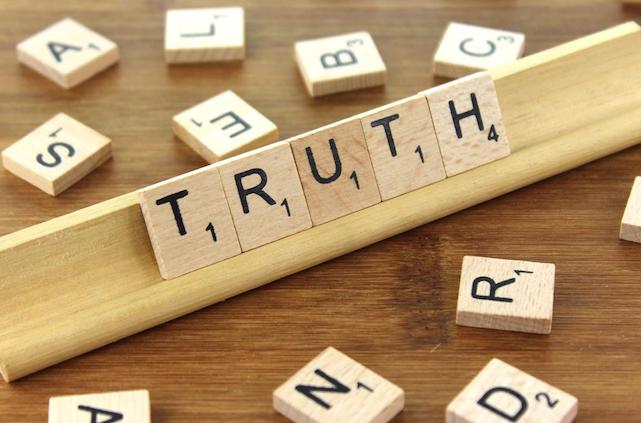 This is the fourth in a series: “Fame, brand, spin, debt and and the slow corruption of moral neglect”

The last shift is something most of us did not really imagine could be shifted: the truth.  Over a series of decades, even immutable facts, have become less certain, less trustworthy, less real.

Again, technology is involved, but it is not technology’s fault.  Technology happens.  It is the choices we make in response that have led us astray.

We can’t personally know the truth about everything.  But we reasonably believe things are true because they come from trustworthy sources.  Before the printing press was invented, written documents were trusted because — frankly — they were hard to produce.  Only those with some standing in the community and reputation had the resources to produce them.  And so people got used to generally trusting things that were written down.

Printing presses disrupted this.  They made it possible for all sorts of things to be published that wouldn’t have been printed before.  Including many lies.  While overall it greatly improved the free flow of information, it also confused people.  For many years, people questioned whether they could trust anything they read.

Today, we have the printing press effect on steroids.  In fact we have had two media revolutions at once.

30 years ago, with the advent of cable news, we created a means for virtually limitless news.  Instead of news organizations being forced to decide what events mattered, they needed to fill time with things that were  “newsy.” Eventually, they discovered that if they made news a form of entertainment – with teasers, and arguments, and frightening graphics – they could boost ratings.  News programs took a political slant.

Before long, news balkanized so that every viewer could choose the news that reinforced their biases.  Conservatives followed channels that informed them that liberals were untrustworthy, and capable of the most irrational and diabolical acts.  And vise-versa.  Social media only compounded this, because its algorithms ensured that you’d be fed stories that reinforced your biases and beliefs.  This not only deepened divisions over opinions, it caused people to choose their own facts.

If this were not enough, a second wave of disruption emerged close on its heels that further confounded the truth.

With the arrival of cellphones and the world-wide web, suddenly even news organizations could not control accuracy.  Every person with a mobile device today is a journalist and publisher.

Before the traditional media even hears about a story, people are uploading images and getting their own version out faster than news services.  To stay relevant, traditional media are running stories they get from the internet — right, wrong, or horrifyingly wrong.

Which has made facts more fungible.  We had the spin room during the Clinton administration.  The Bush era introduced us to the concept of  “truthiness.”  And today, the Trump Administration speaks of alternative facts and calls the New York Times “fake news.”

People too often don’t know what to believe.

And so at one point over 40% of Americans believed that their President, Barack Obama was born in Kenya.  It did not matter that President Obama was born in Hawaii, and that his birth had been duly recorded and reported in the newspaper for all to see.  Bloggers created this lie, sent it around at the speed of the internet, and news channels covered the “phenomenon” as if it were actual news.  If anyone on earth recognized the power of this phenomenon, it was the chief evangelist of this claim, Donald Trump.

Polls confirm new, deeper depths of gullibility.  Today some substantial portion of Americans believe Michelle Obama is a man dressed as a woman.  Even more believe that climate change is a hoax, that airplane vapor trails are a government conspiracy to spread chemicals to humans, that vaccinations cause autism, and that toilets in Australia flush backwards.

In this environment, where facts are ignored, and people choose the stories that support their world view, is it any wonder that a substantial number of voters believe even the most outlandish claims.  That President Trump can claim that it wasn’t raining when it was.  That his crowds broke records when they didn’t.  That millions of people cast illegal votes when they did not?

Our nation elected a President that was prepared to call into question not only a stunningly broad set of policies that had served the U.S. well, but he has questioned basic facts, science, and principles of our democracy.

There is a rot at our moral core.  My friend Michael Rich put it best  — the United States suffers from truth decay.