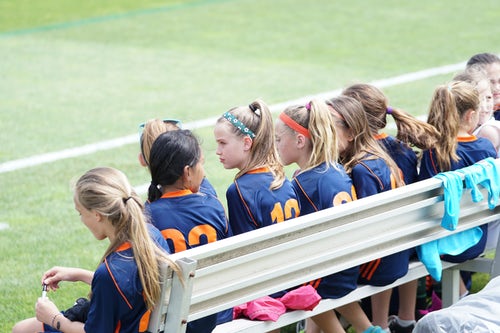 I know this topic has been covered relentlessly, and my experience with sports as a kid is no different than most, but it is something I think about often, and it continues to shape the values I try to instill in my own girls:  Commitment, hard work, persistence, and most importantly, overcoming failure.  These values, however, didn’t come to me by focusing on one sport, they were lessons learned by playing multiple sports.  And I think there’s a difference.

So more about me:

I moved to Benicia in the middle of the 5th grade from nearby Richmond.  By then, I was already signed up for my fourth year of Little League.  Practices were in El Sobrante and games in Tara Hills; both towns about 20 minutes from our new house.  I thought for sure this was my ticket out of baseball! Why, say you? Because I was a horrible baseball player! I was scared of the ball,  never practiced outside of organized practice, and just didn’t pay attention.  I was the kid who sat the bench for six innings to be put in right field, for just the last inning.  You know what that means, right? I sucked. I begged and begged to quit.  My mom told me,  “Hey you signed up for the team, so you don’t get to quit in the middle of the season.  You start something you will finish it.”  Was she crazy?  I just couldn’t understand her logic. Fortunately for me, maybe my mom knew what she was doing.  Everything doesn’t always have to be fun, but if you say you’re going to do it, do it and finish it.  Lesson learned, Mom.

Around the same time, I got a new neighbor, Steve. Apparently, Steve was a locally-known young football player. I’m sure the Pee Wee Football coaches were pinching themselves at their good fortune in scoring this young running back. I idolized Steve, so of course I said yes when he talked me into going out for the football team, and as luck would have it, I made the team.    Steve was a stud, but it turns out, I was also pretty good.  I played through 6th, 7th and 8th grades, led the team in tackles as a linebacker every year, played wide receiver, and even caught a few touchdown passes. Back then, good players played both offense and defense, and it felt good to always be on the field. I practiced hard, was never late for practice, and tried to be the first kid to finish laps the coaches made us run after losing a game. I walked around with a football in my hands every day. There’s no doubt that I loved the recognition, but I felt most proud about the effort I was making.  I could feel the cause and effect. It was hard and I loved it.

But the most important lesson l learned came from basketball. I hated baseball. I liked football and worked hard at it, but basketball had always been my true passion. My friends and I played hoops at recess and after school. My best friend, Mike, played on the middle school team, so I decided to try out.  Long story, short, I went out for the basketball team in 6th, 7th , 8th, 9th and 10th grades. I got cut from the basketball team in 6th, 7th, 8th, 9th and 10th grades. That’s right. Every year. I couldn’t shoot, I played pretty good defense, but I could only dribble the ball with my right hand. ( I still can only go right!)  The coaches made me team manager for two years, because obviously, they felt sorry for me.  Every year I was devastated, but therein lies the lesson:  I persisted. And then I failed, again and again and again.  But that failure strengthened me.

Don’t get me wrong. I believe sports are great for kids. There’s nothing better than watching your child having the time of his life out on the field or court. But my fear is that we’ve lost our perspective. Our culture now dictates our kids specialize in one sport at a young age. It isn’t about the fun, or exercise or discovery anymore, but instead, it’s all about being “good”.  We parents are spending wads of money hiring private coaches and trainers and sports psychologists to make sure our kids make the team.  Our kids have to play year-round club sports in order to keep up with the other kids who are seeing trainers and coaches and playing year-round club sports. Of course, there will be the phenomenal athlete who will be recruited to college and maybe play pro sports, but dig deep. Is it your kid?  And if not, then perhaps it will still be okay if we relaxed a bit. Why not encourage our kids to play multiple sports (or act, sing, sew, etc.)?   Who knows? They may be really bad at baseball and want to quit mid-season, or maybe they’ll like football and put real effort into the game, or perhaps they’ll try out for basketball and fail.  It could be that they won’t ever be good.  But maybe, just maybe, they’ll discover something worthier instead.