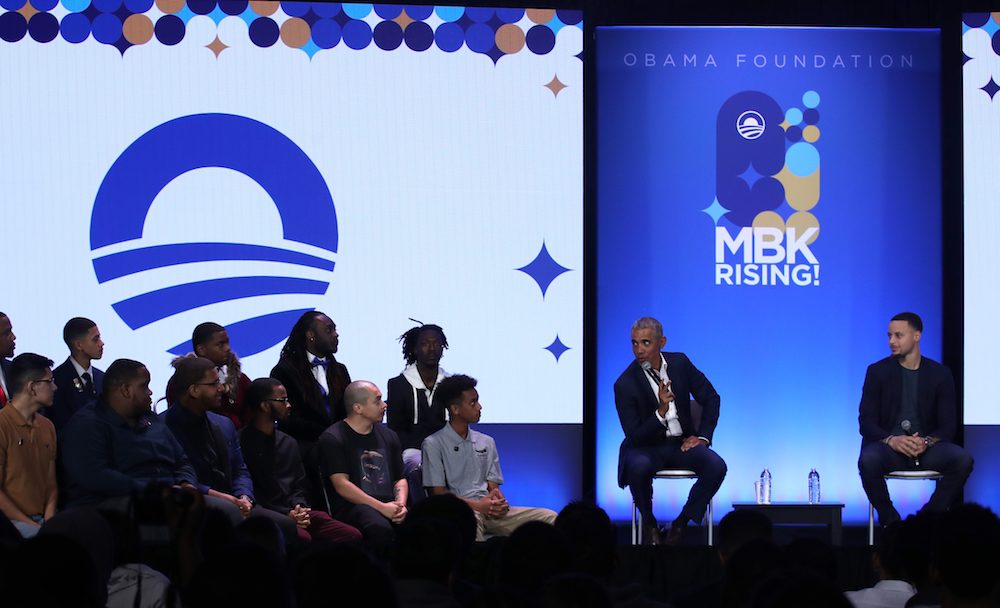 OAKLAND – An African-American duo that has taken Hollywood by storm told a gathering of boys and men of color on Wednesday to work together to create their own stories of change and hope.

Closing the national gathering of Barack Obama’s My Brother’s Keeper Alliance at Oakland’s Scottish Rite Center, filmmaker Ryan Coogler and actor/producer Michael B. Jordan shared lessons learned from their work together in crafting powerful stories of African-American resilience, from “Fruitvale Station” to “Creed” to Oscar-nominated “Black Panther.” Just as the two Hollywood heavyweights have depended on one another to fuel their success as film storytellers, they encouraged those attending MBK Rising! to find people in their own lives to help light their paths.

“If you want to be an artist, if you want to build anything that is going to affect people, that has the potential of existing long after you are gone from this place, you have to do it with other people,” said Coogler, who grew up in Oakland and Richmond.

“That’s how the world works, that’s how we work as human beings. Find your group, find your collaborators and look around you.”

Coogler and Jordan began their rise to fame together in 2013 with “Fruitvale Station” about the shooting death of Oscar Grant in 2009 at the Fruitvale BART station in Oakland. The director and actor teamed up again on the critically acclaimed films “Creed” and “Black Panther,” which is nominated for Best Picture at Sunday’s Academy Awards. “People come into your lives for certain reasons,” Jordan said. “I was blessed enough to meet this guy at a time of my life where it made sense. As an actor, you always need other pieces to make art.”

Jordan also used his appearance at MBK Rising! to announce a new partnership with My Brother’s Keeper to provide fellowships for people of color with major companies in the entertainment industry. “We want to be able to give you angles and opportunities in places that may not have been available,” he said.

The panel discussion focused on the power of narratives and storytelling in helping to create a greater understanding of the unique experiences and challenges living as an African-American.

For both of them, that journey began with “Fruitvale Station” and the opportunity to shine a light on Grant’s experience as a black man in Oakland leading up to the fateful New Year’s Day when he lost his life. “That was a story about a young man coming of age on a day when he didn’t know he was going to lose it all,” Coogler said. “I was often struck how absent those types of portrayals were in the movies I watched. I felt a duty to bring that as a filmmaker.”

Similarly, Jordan spoke of growing up as a fan of science fiction films that lacked diverse characters and roles. “I never saw anybody that looked like me,” he said. “I always wanted to create and bring our own black mythology to the screen.”

In an earlier panel on combating toxic masculinity, transgender actress MJ Reynolds challenged those in the audience to stand with members of the LGBTQ community. “There’s a lot of misogynistic words thrown at us,” she said. “We are the minority of the minority. I think young men need to understand that and understand that we are beside you to move a culture forward. We need to stand together.”

The three-day gathering began Monday with a day of community service and on Tuesday featured discussions with Obama, Golden State Warriors star Steph Curry and Grammy-winning singer-songwriter John Legend. The event brought together hundreds of youth and community leaders from around the nation to celebrate the growth of My Brother’s Keeper over the past five years in developing programs aimed at reducing gun violence, building mentoring relationships and improving life opportunities for boys and young men of color, while building momentum for the future.

Brandon Nicholson was among those leaders moved by the messages and stories that were shared over the past two days. He is the executive director of The Hidden Genius Project, an Oakland nonprofit that he started seven years ago to train and mentor African-American male youths in technology creation, entrepreneurship and leadership skills. The program served over 3,900 youths in various capacities in 2018, he said. “The lasting impression has been that even with such prominent and powerful personalities and people doing fantastic work in our communities, the work really lies and rests on the shoulders of individual people at the grassroots and community level with engaging young people and policymakers to make sure our boys of color have the best possible opportunities afforded them,” he said.

“The onus is on us as ordinary individuals to continue to make efforts and do extraordinary things on behalf of our young people.”

Wednesday morning’s session featured personal testimonies from those who have overcome incarceration, poverty and other societal ills to launch and lead programs that are making a difference in urban communities. Shaka Senghor, executive director of The Anti-Recidivism Coalition, started Wednesday’s session by sharing his journey from serving 19 years in prison in Michigan for murder, including stints in solitary confinement, to becoming a best-selling author, artist and activist who has met with Oprah Winfrey and President Obama.

“I believe our journey of tragedy to triumph is important,” he said, “so that every young man of color in this room can understand no matter where you start at, if you make a commitment to lifting yourself up and lifting others as you climb, you can provide very different outcomes.”

Former NFL receiver Victor Cruz, who won a Super Bowl championship with the New York Giants, spoke of the value of mentoring as he sat beside Eddie, a youth from the Boys and Girls Club in Paterson, New Jersey, where Cruz spent time as a child and now supports with his money and time. “I’m using my resources to get these kids out and see different things about the world and different ways to view the world and see outside the viewpoint from Paterson, New Jersey,” he said. “I want to be present. It wasn’t just about lending my name and walking away and doing other things. I want to make sure, especially because it’s in my hometown, I’m there, present, giving back, using my resources to the best of my ability.”

Another panel discussed innovative community programs to combat gun violence in Chicago and the East Bay city of Richmond. Sam Vaughn of Richmond’s Office of Neighborhood Safety talked about the success of the city’s peacemaker fellowship program in curbing shootings in what had traditionally been ranked as one of the nation’s most dangerous cities. The program offers mentoring and guidance services to those who have a history of or are at risk of gun violence.

“We’ve gotten a lot of success by looking at these young men as assets and not liabilities.”

That sentiment was echoed by Richmond’s Assistant Police Chief Bisa French, who said that partnerships between law enforcement and community-driven programs are key to tackling crime. “We don’t have the ability to keep locking everybody up,” she said. “We want to get people on the right path, we want people to see there’s a different path they can take.”