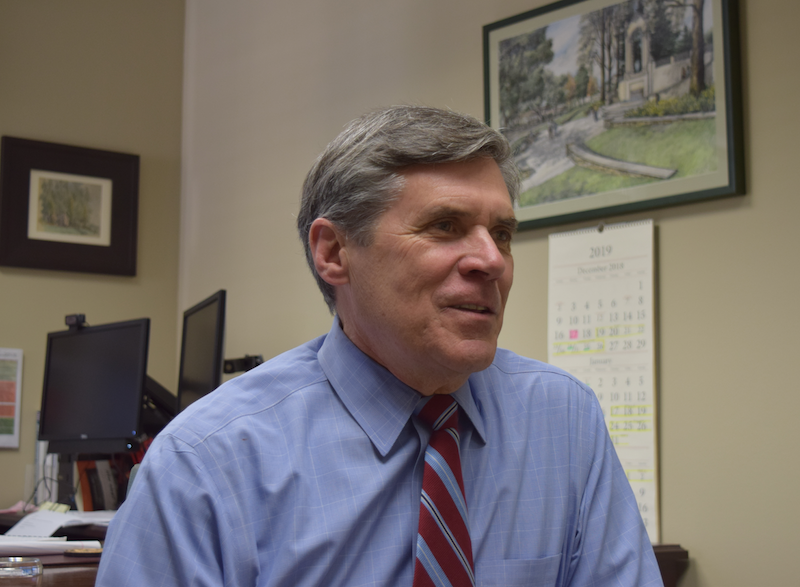 Paul Benoit in his City Hall office in January.

PIEDMONT — Paul Benoit had never heard of Piedmont until someone urged him to seek a job opening there.

“I had applied with the City of Monterey for the city manager position, and I was a finalist there when a recruiter called and asked me to apply for the Piedmont job” five years ago, Benoit said. “I said, ‘Why  not, I’m looking at going to (the Bay Area) anyway. The two cities were hiring at the same time, and Piedmont called first. And I’m happy they did.”

And now Benoit — Piedmont’s city administrator for the past five years — is calling it a career in the small city where he said he was proud to help assemble what he said is a great team of employees, and help bring City Hall technology into the 21st century.

Benoit, 64, told city officials Friday he plans to retire, effective June 30 — the end of the city’s fiscal year. It’s also the end of what will be an almost- 40-year career in city administration.

He said his number-one accomplishment during his five years was helping bring good staff to the city — people who are “good, smart and work as a team.”

“That’s where a city administrator can really make a difference,” Benoit said Tuesday. “We do a good job here of helping people’s living environment look good.”

“That was a big ship to move,” King said. “He also set us up to move forward on an Aquatics Center Master Plan.”

A generally upbeat fellow who smiles frequently, Benoit started his municipal career in the Northern Marianas, a U.S. commonwealth near the equator in the Pacific Ocean. He worked there from 1979 to 1983 on a land-use management program. He then served as community development director in the coastal town of Astoria, Oregon for 17 years before becoming assistant city manager of Alameda in 2003. He returned to Astoria in December 2005, this time as city manager and remained there until moving to Piedmont in March 2014.

In Piedmont, Benoit replaced the retiring 25-year veteran administrator Geoff Grote.  as city administrator in March 2014. When he got to town, he asked all five City Council members for the names of five to 10 people he should meet. He said he had conversations with about 50 people, over lunch, on walks, in his office, getting the lay of the land and advice on what he could do for the city.

Indeed, he found a city of people who were smart, engaged and concerned about where they lived. Contrary to what happens in some other affluent communities, “I don’t get a lot of complaint calls here,” he said.

He is a firm believer in working slowly and steadily —

Cities take a long time to make changes. Baby steps, step by step, is how you get things done.

To that end, he points to how Piedmont has developed master plans for major projects, the latest being the Linda Beach Park Master Plan approved by the City Council Tuesday night.

He said he also is proud of encouraging city leaders to make improvements to regal-but-aging facilities such as Linda Beach Park and the former residence that is now the Piedmont Recreation Center. “Aging”: is also a good descriptor for the city’s IT systems. City Hall, for example, didn’t have wi-fi until a few months ago.’

That and other upgrades depend on finances, and Benoit said his 94 employees operate efficiently and courteously. He called it “concierge-level service” in which firefighters are happy to help provide a ladder for changing a light bulb on a 20-foot ceiling or helping push a wheelchair up a hill. “There’s a service ethic here that’s real.”

Benoit said his family kept their house in Astoria, and that, at least for the immediate future, he will retire there. While he would consider doing some  “interim” city manager work after he retires, there’s a reason why he’s retiring.

“If I wanted to get up each morning and come to work, I’d stay here,” he said. “I’ve been working since I was 14. I actually want to do, while I’m healthy and able, the things I want to do.” Those things will include spending time with his wife Connie, three sons and four grandchildren.

Tuesday night, Mayor Robert McBain praised Benoit publicly. “I tried to talk him out of it by giving him access to the city plane, or our ‘34 Hudson Hornet,” he joked. “But no … “

Afterward McBain said, “Paul brought in tremendous practical experience managing people, and with his attitude made sure they did well.”

Benoit doesn’t expect to usher through many big projects in his remaining 5 ½ months on the job, given how slowly those government wheels turn.

“My goal is to make sure we have a well-oiled machine in place to leave to the new person.”