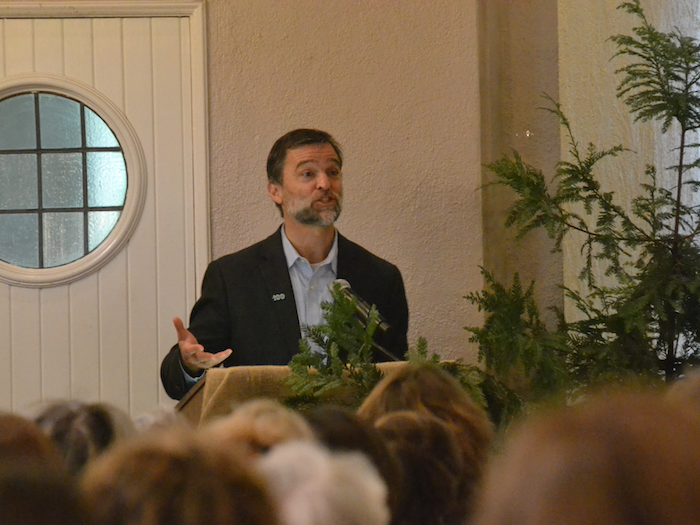 Sam Hodder, President and CEO of Save the Redwoods

“Redwood forests are not just windows to the past, but doorways to our future,” said Sam Hodder, at an event sponsored by the Piedmont Garden Club on Wednesday, January 16. Hodder is the President and CEO of the Save the Redwoods League, an organization committed to protecting these gentle giants.

“Redwood trees are the tallest trees on the planet and store three times more carbon than any other known ecosystem,” said Hodder, explaining that they are as significant to our planet as the Amazon rainforest, the Great Barrier Reef and the Serengeti.

“At a time when we are struggling to find ways to mitigate the proliferation of carbon in the atmosphere, we have learned that California’s ancient redwood forests—our coast redwoods and giant sequoia—store more carbon per acre than any other forests in the world. Early research results indicate that we could have another global top 10 finisher—second growth coast redwood forests like the one here in Redwood Regional Park.”

Hodder also touted redwood’s capacities for providing habitats for animals and plants as well as their ecological resilience. “They have tremendous resistance to fire and decay.”

Unfortunately, their virtues did not go unnoticed by the early settlers of Northern California. Explosive demand for lumber after the 1849 Gold Rush caused extensive damage to the ancient redwood forests. Today, only 5% of the original coast redwood range remains.

Save the Redwoods is trying to reverse the damage. The League has already protected more than 200,000 acres of redwood forests over the past century. Their goals include restoring as much as 80,000 acres of previously logged forests in Redwood National and State Parks. “Save the Redwoods is determined to preserve old growth islands as well as restore and care for the new growth sea of forests around them,” said Hodder.

Since its founding in 1918, the Save the Redwoods League has helped create sixty-six redwood parks and reserves. He noted that in 1934, in the midst of the Great Depression, 71% of East Bay residents voted to tax themselves to create the East Bay Regional Park system.

Today, warring political factions and competing philanthropic requests create challenges for the league. “Historically, conservation movements have been ‘purple’—both Republicans and Democrats have created legislation that protected our forests. It’s not a question of politics but of science,” Unfortunately, some of the science being brought forward today is inadequate.”

He identified funding as their number one challenge since saving the redwoods involves supporting research to restore the forests; purchasing redwood forests and the surrounding land to nurture them; regenerating logged forests and increasing awareness among the millions of visitors who come from around the world to visit the redwoods every year. (In 2018, Lonely Planet named California’s Redwood Coast the #1 destination in the country to visit.)

“We’ve done a lot over the past hundred years, but we’re not ‘out of the woods’ yet,” said Hodder.

Along with donating to Save the Redwoods, Hodder told the crowd to buy lumber harvested from sustainably managed forests and care for the redwoods that exist on their own properties.  He also encouraged the audience to get out and experience the redwoods throughout California. “There are a hundred redwood parks in California, not just Muir Woods,” said Hodder. “They all inspire us through beauty and the power of nature.

If you, too, would like to “Stand With The Giants,” you can donate here at SavetheRedwoods.org.

Kathryn Pritchett is a writer and blogger who likes to explore the basic building blocks of good design.  Her writing about design-related things for many print and online publications including the Bay Area News Group where my column Things Elemental ran for many years. Follow Kathryn on Things Elemental.