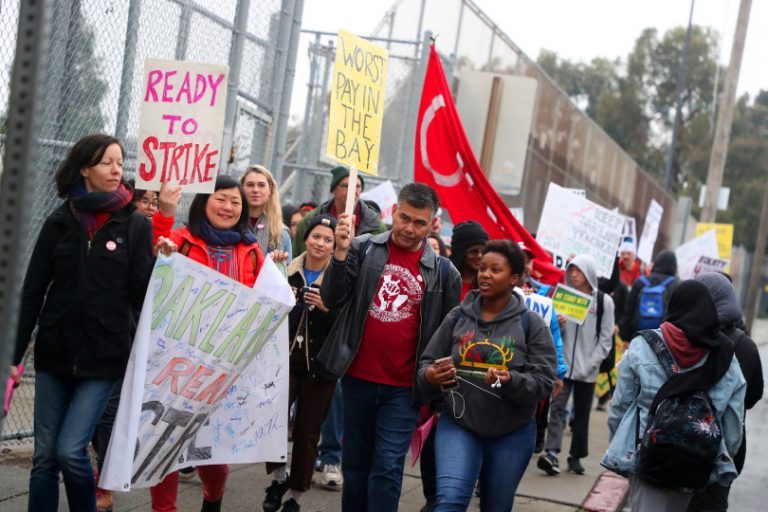 Jan 18, OAKLAND – Oakland Technical High School’s teachers were at school by the first bell Friday morning – but many of them weren’t there to teach. Instead, they were met by hundreds of other Oakland educators to march and rally for higher pay, smaller class sizes and more resources for students.

“We’re getting ready for a strike,” said teacher Tania Kappner, who is also part of a union caucus called Equal Opportunities Now/By Any Means Necessary. “We are out here sick and tired of the district’s disrespect.”

Friday’s march was planned to be a one-day affair, and it’s still unclear if and when a strike will happen. Teachers are demanding a 12 percent pay raise after Oakland Unified School District offered them only 5 percent. Negotiations have been going on for around two years.

The teachers union, Oakland Education Association, says it has scheduled a fact-finding panel for later this month, which is the final step before the union can organize a strike. The OEA did not lead or promote Friday’s march, according to First Vice President Ismael Armendariz.

John Sasaki, a spokesman for OUSD, said the district would like to resume negotiations with the union, and is open to giving teachers higher pay. But he also said the district is facing budget issues that can’t be ignored. “We would love to give our teachers the world,” Sasaki said. “But we just don’t have the world to give them.”

The tension in Oakland comes at the same time as teachers in Los Angeles are on strike, throwing many schools there into chaos. Teachers in many other states across the nation have also gone on strike in the past year, giving broader energy to what otherwise would be a local issue.

The Oakland teachers said they were buoyed by that support Friday. Hundreds of students and teachers marched down Broadway, chanting and waving signs, blocking southbound traffic for blocks. “Teachers and parents must unite, education is a human right,” they shouted. Many were holding colorful signs with slogans that included “Teachers deserve a living wage” and “Cut from the top.” Passing drivers honked their horns, and business owners and patrons along Broadway raised their fists in support.

Two marching high school students, Marlene Smith and Ruby Schrag, described pinched resources at their school, Oakland Tech. Smith said the school didn’t have copy paper when the year started. And some classes are so large that not all the students can sit at desks. They write on books on their laps. Schrag and Smith said they joined the march to support their teachers. “The teachers put a lot into their jobs and we wanted to reciprocate,” Schrag said.

The march ended at OUSD headquarters at 11th and Broadway. The chants continued, and organizers asked the marchers to come to the next Board of Education Meeting on Jan. 23.

While some of the marchers were determined to strike, others were more cautious. Amy Colt, an English teacher at Skyline High School, said she hopes Friday’s march sent enough of a message. “I think it’s going to be a real wakeup call,” she said. “We have the power.”