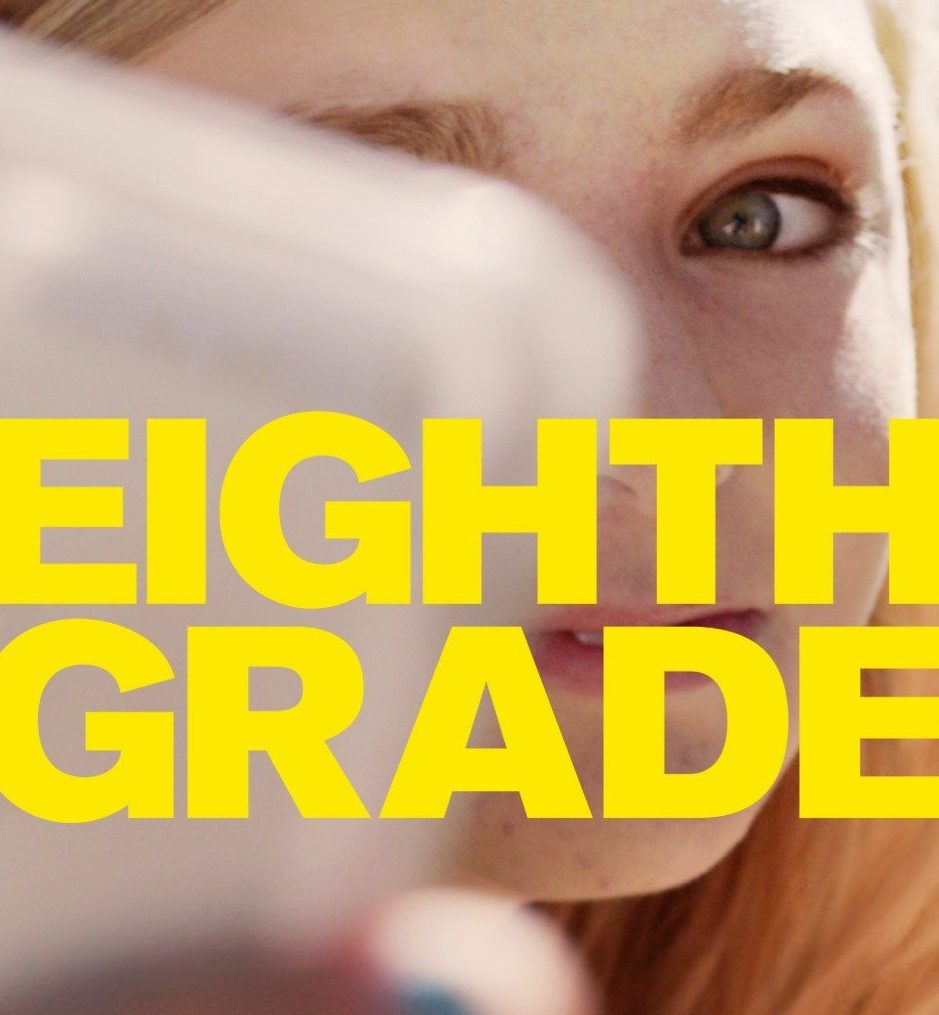 Think of almost any awkward, embarrassing, soft R-rated situation from your middle school years, and you can find it in Eighth Grade, a 2018 film from Bo Burnham. With subtle, restrained performances by its stars and bit players, the movie rises above the coming-of-age tropes. It heart-breakingly yet hopefully captures a teenage girl’s drive to discover herself, and her father’s poignant efforts to connect with her

Elsie Fisher plays Kayla, a 14-year old in her last week of middle school. She drifts through classes with little interest, and doesn’t appear to have much of a real-world social life. But she tries to make up for it online, where she posts self-help videos and endlessly scans social media. Her videos are “like”-filled discursions on topics such as “Being Yourself” and “Putting Yourself Out There.” Since no one else (or almost no one, as we find out later) watches, the videos seem designed more to encourage herself than to enlighten others. Kayla also talks about how “confidence is a choice”, and we see her make halting progress with some kids, only to encounter setbacks with others.

Fisher movingly captures this interplay of despair and hope. She walks with hunched shoulders, which the camera often exaggerates by filming her from behind. She hides her acne by looking down at her books or the sidewalk. But she also allows herself fleeting, hard-won smiles as she begins to connect with others and better understand herself.

Josh Hamilton (recently seen as Clay Jensen’s father in 13 Reasons Why), who plays Mark, Kayla’s single father, displays a touching cluelessness in navigating the ups and downs of Kayla’s life and his relationship with her. He seems genuinely mystified by his daughter, especially in a classic scene where he’s minding his own business driving her to the mall, and she complains that he’s being “quiet and weird.” But Mark’s admiration and affection for Kayla prove powerful, as he gropes his way to helping her recover from a moment of crisis.

Burnham displays a deft touch in his film writing and directing debut. Best known for his wild internet comedy and stand-up/music specials (What from 2013 and Make Happy from 2016), he elicits grounded performances from all of the actors. Several scenes could have gone in a very different, more menacing direction (especially Kayla’s claustrophobic encounter with an older boy in a car), but Burnham succeeds in creating more nuanced moments, with plenty of opportunities for learning by kids and parents alike. My favorite scene comes at the end, when Kayla hangs out with a new friend, Gabe (Jake Ryan). He’s all nerdy enthusiasm, “accidentally” showing Kayla an award he won and checking in every so often to make sure Kayla agrees that they’re having a good “chat.” She seems wary at first, but his infectious charm and genuine interest in her lead to one of Kayla’s infrequent but well-earned smiles. Gabe concludes that Kayla is “awesome”, and Fisher makes us believe that she’s starting to agree. I just hope we get to see more of Kayla, Gabe, and Mark in 12th Grade in a few years.