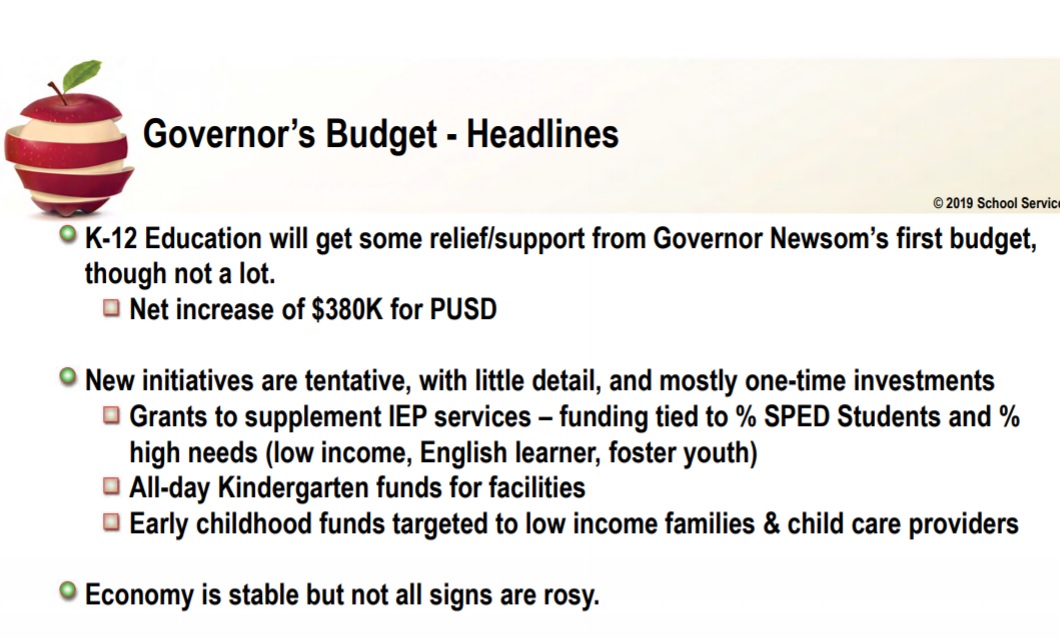 At the Jan. 23 board of education meeting, Chief Financial Officer Ruth Alahydoian presented a look at what may be in store for the district’s coffers in the 2019-20 school year. “It’s a little relief,” she said. “About $380,000. But it’s not a big thing.”

She emphasized that the information from the Governor’s Budget Workshop that the school board, Superintendent Randall Booker, and other district representatives attended was preliminary and more details will be released in later workshops. Changes in the budget’s numbers will likely occur between now and when the state legislators vote on the budget in June, as is often the case in proposed budgets, she said.

Superintendent Booker and Alahydoian pointed out that the governor’s early childhood care and education programs will probably get center stage. In total, the 2019-20 state budget includes over $2.4 billion in programs and services to children and families. Booker said it’s the most money he has ever seen devoted to one program and he suggested the program’s fund be discussed during an upcoming meet-and-greet with Assemblywoman Buffy Wicks.

The proposed budget does include a one-time contribution for schools to pay down unfunded pension payments, which will decrease the amount the district will owe for the school year.

Whatever that amount turns out to be in savings will likely be needed to pump up the district’s reserve funds, a rainy day fund all public school districts set aside for unseen future needs, including economic downturns.

“We have to make some difficult decisions for next year,” Alahydoian said. “For seven years we’ve had more expenditures than revenues.”

The biggest expenses that have cut into the district’s budget are from retirement benefit payments and declining enrollment, challenges that districts throughout the state are facing.

The school board reviewed the district’s current regulations on interdistrict transfers. Students who reside outside of the city are allowed to attend Piedmont schools in certain circumstances, such as when parents are constructing or remodeling a home, for example, or are children of PUSD and city employees. (See full details of the district’s interdistrict transfer policies in section VIII of the board agenda.)

Thirty-year resident Trudy Maddy, whose adult children graduated from Piedmont schools, asked the board to consider making an allowance for non-district grandchildren of Piedmont homeowners to attend the schools.

“With declining enrollment and housing, I think now is an excellent time to bring in grandchildren,” she said, adding that it would fill some empty school desks and garner support from grandparents for parcel taxes.

In discussion, Trustee Megan Pillsbury said it could help with the tax and fundraising campaign, but there could be problems if the district experienced a sudden enrollment increase that would mean one sibling could Piedmont schools but other siblings could not. Trustee Sarah Pearson echoed that thought, and also suggested considering the idea that while the idea is worth discussing, it is also important to discuss the benefits for students and teachers in smaller classes.

Booker said a school district in southern California is doing this, but among their conditions are that both grandparents must be living and step-grandparents are not included. The board will discuss the topic further in the future.

The board heard and approved an independent annual auditor’s report from its certified public accountant firm for fiscal year 2017-18. The district summarized the fiscal year with this statement:

“Despite declining enrollment and increasing pension costs, the district was able to keep overall deficit spending at the originally budgeted level of $500K. All employees received additional support from the district towards the cost of health benefit premiums. The district’s cap was increased by $300 per FTE. The district maintained a positive certification on its first and second interim financial reports.”