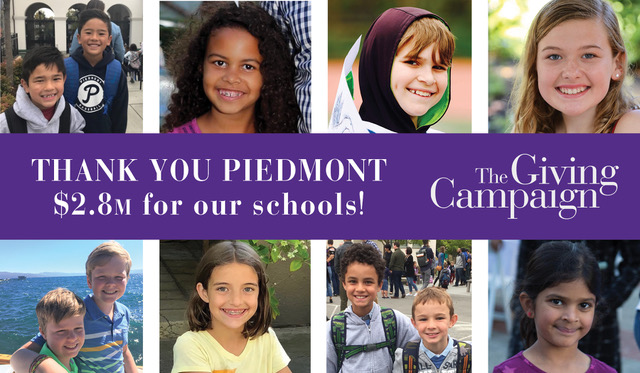 PIEDMONT — The Piedmont Education Foundation (PEF) is thrilled to announce the results of the 2018-19 Giving Campaign, the annual fundraiser to support Piedmont schools. Funds raised by the campaign help to maintain low student to teacher ratios as well as essential programs including libraries and librarians, art and music, teachers, S.T.E.A.M. training, electives, A.P. classes, counselors, and special education support.

Heather Frank, Executive Director of the Piedmont Education Foundation, is grateful to the community for its exceptional support. “We reached more people this year through marketing and personal asks,” said Frank, “but I think the main reason for the increased success is that the Piedmont community has done the research and understands the unprecedented needs of our schools. Piedmont schools have a rigorous, robust and inclusive program. This community knows how special that is and will work to maintain it.”

Robert McBain, Mayor of Piedmont and a former Board Member of the Piedmont Education Foundation, is also pleased with the campaign’s stellar outcome. “Congratulations to the Piedmont Education Foundation, Giving Campaign organizers and all of the volunteers for producing this great result. Truly impressive,” said McBain. “I always remain grateful for the generosity of our community in supporting Piedmont’s great schools.”

The success of Piedmont’s Giving Campaign comes amid a backdrop of challenges for California’s public schools. “California has failed to provide school districts with sufficient funds to pay teachers appropriately,” says PUSD superintendent Randall Booker. Notably, funds raised by PEF from the generous community last year helped ensure that Piedmont teachers would have a raise for the first time in years.

Without the Giving Campaign, our schools would look very different. The continued growth of PEF’s fundraising shows how much the Piedmont community values our teachers and our students.”

Cortney Allen and Nicki Gilbert, parents of Piedmont students and the volunteer Co-Chairs of the 2018-19 Giving Campaign are exceptionally proud of the results. “Thank you to all the parents, grandparents, empty-nesters, Parent Club Presidents, and other community members for their support and generosity,” said Allen and Gilbert. “More than 50 parents volunteered to help with this year’s campaign – a true grassroots effort!”

The Piedmont Education Foundation invites all residents of Piedmont to join in a “Giving Campaign Wrap-Up Celebration” on Friday, January 25 at 3 p.m. at the Exedra Arch in Piedmont Park. ​Hot chocolate, courtesy of Mulberry’s Market, will be served.

For more information on the Giving Campaign, go to www.piedmontedfoundation.org/donate/giving-campaign. Piedmont Education Foundation is a 501c3 nonprofit organization dedicated to providing sustained financial support. Led by a 25-member volunteer board of directors and supported by a professional office staff, PEF oversees the Giving Campaign, Spring Fling, the Student Directory, and much more. Visit www.piedmontedfoundation.org to learn more.