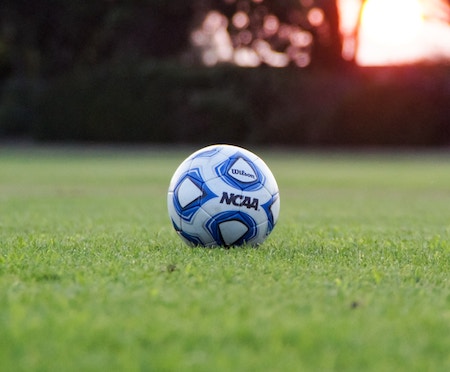 Ceci Brien was called to the sideline by Sofia Allen-Goix. As Brien slapped hands with her teammate during the substitution, Allen-Goix said, “That’s enough for you, buddy!”

It was a laugher for the Piedmont High School girls soccer team on January 22 as the Highlanders beat an over-matched Hayward team, 17-2. Brien scored four goals, Clara Kochendoefer had three and Allen-Goix and Ashley Nelson had two apiece to help lead Piedmont. The Highlanders scored four goals in the first six minutes of the game and sent their first wave of substitutes in barely eight minutes in.

The match proved a respite from the West Alameda County Foothill League for the Highlanders. Piedmont has dropped three consecutive tough games in league, including a 1-0 loss to Berkeley on January 21.

“We’ve had tight games against all of them, unfortunately we’ve come out the wrong side,” coach Dan Chubbock said.

Brien got Piedmont going on a header off a corner kick by Ivy Smith just 29 seconds into play. Kochendoefer scored from about 18 yards out in the fourth minute to make it 2-0. Maxine Miller and Nelson followed with goals and the rout was on.

It was 8-1 at halftime and the only strategic question was which player would get to play goalkeeper late – the winner was Miller, who had a save in relief of Grayson Ellis, who had four saves.

Arlene Cisneros and Briana Torres had the goals for Hayward. Goalkeeper Sheila Vaca had six saves.

“The positive about today is it allowed the girls to get some goals and get their confidence back,” Chubbock said.

Now, the Highlanders get back to league play. They have games left against Mt. Eden, Bishop O’Dowd, Castro Valley and Berkeley. Then come the North Coast Section Division IV playoffs. Piedmont is the only Division IV school in the league – the rest of the teams have larger enrollments and will play in higher divisions.

“Our aim is to qualify in the top half so we get at least one home game,” Chubbock said. “My own personal aim, I’d like to be in the top four so that gives us a couple of home games.”