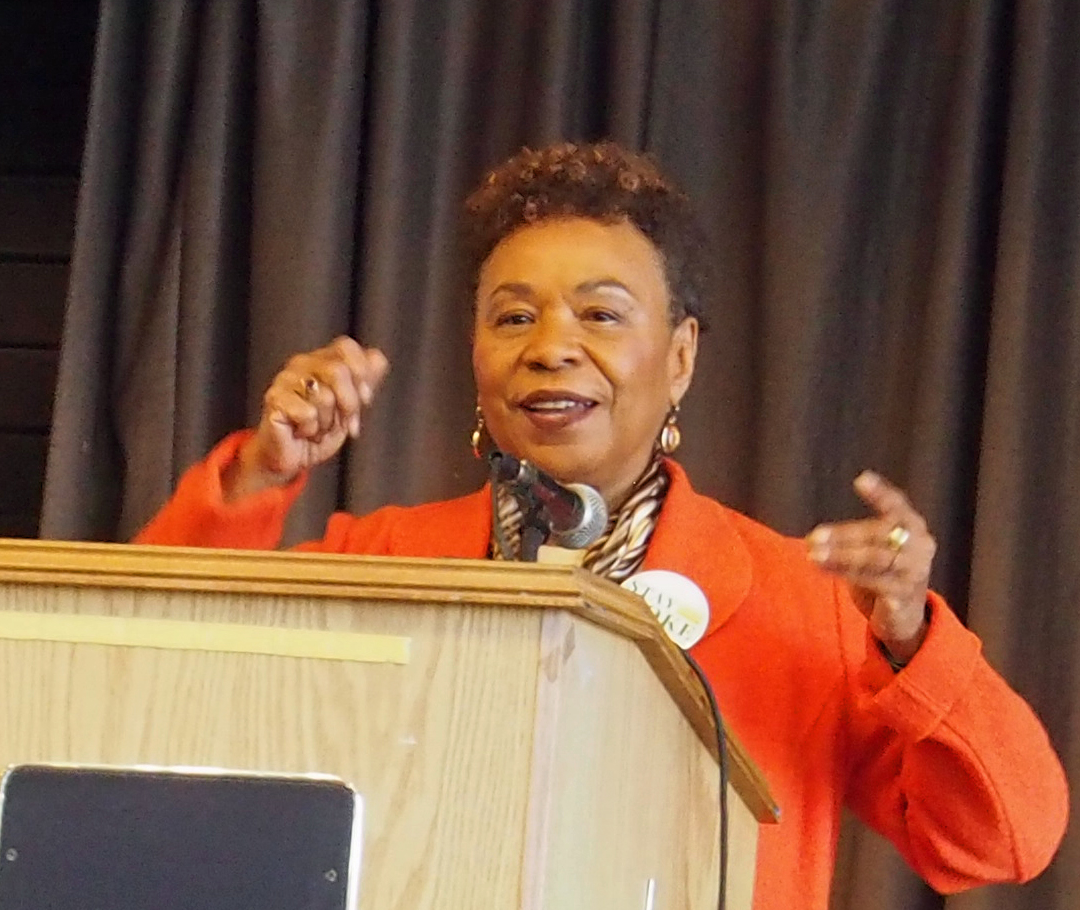 Economic inequality in the Bay Area, exemplified by the region’s housing crisis, was a focal point of the city’s 22nd annual Martin Luther King Jr. Day Celebration, with speakers also raising the challenges posed by the divisive national political climate.

An enthusiastic standing-room-only crowd filled the Veterans Memorial Building auditorium Jan. 21 for the event, themed “Beyond the Dream: King Speaks Out Against Poverty.”

U.S. Rep. Barbara Lee, who was greeted with a rousing ovation, recalled a 1967 speech by King on “Beyond Vietnam:  A Time to Break The Silence.”

“Dr. King said in that speech that there are three evils confronting us: Racism, militarism and poverty. And we still have to confront these three evils,” she said, commending the event for “talking about poverty and addressing poverty today in a way that it hasn’t been addressed before in my district.”

“In the richest country in the world we shouldn’t have 40 million people living below the poverty line. No way,” Lee said.

“Dr. King said there is nothing new about poverty. What is new, however, is that we have the resources to get rid of it,” she said, adding that there are more means than ever to address the need.

Even as California’s economy booms, “black families are being shut out of that prosperity as the cost of housing and education skyrockets,” Lee said.

“California is both one of the richest states in the nation and one of the poorest” with a growing number now living in poverty, she said. “That is a shame and a disgrace. It’s unacceptable in a state of such inordinate wealth.”

Nationally, “the government shutdown isn’t making anything easier for those who are struggling. And because of historic discrimination in the private sector, nearly 20 percent of [federal] employees are African American. That’s a stain on our country and we have got to send a message to this White House that we need to end this shutdown and end it today,” Lee said to enthusiastic applause.

The celebration opened with an acknowledgement of native land by Oakland attorney, educator and criminal justice reform advocate Ramiah Shanti Brien before introductory remarks by Mayor Bob McBain, who reflected on the continuing struggle to address poverty in the 51 years since the assassination of the civil rights leader in Memphis, Tennessee.

“When Dr. King went to Memphis he didn’t go there just for civil rights, he went there to help in a tough labor issue” during a strike by the city’s black sanitation workers, McBain said.

“It was violent, it was nasty and the city of Memphis was in peril and that’s why he was there,” he said.

McBain noted that around that time King had also been in Washington, D.C. “to raise awareness of the issue of poverty in the United States,” and that photos showed “an entire tent city on the mall” with the Washington Monument in the background.

“I thought to myself, what would Dr. King think today” if he saw the proliferation of tent camps around the Bay Area, McBain said. “And I think he’d be very sad to realize that isn’t a protest, that’s the way people live” and “I think he’d say we did not do a very good job.

The audience was also treated to music by the Oaktown Jazz Workshops and Oakland Interfaith Youth Choir, and performances by the Black Sheroes of Young Gifted and Black, Together We Slam of Piedmont High School and 16-year-old Oakland poet laureate Leila Mottley.

Audience participation at the celebration included a discussion facilitated by Tonda Case, co-president of the Piedmont Appreciating Diversity Committee, on the topics of economic disparity amid rising homelessness, and instances when people have been in a position to give or receive help from others.

Rounding out the speakers was Buffy Wicks, newly sworn in as the area’s representative in the state Assembly, who called Dr. King’s teachings and lessons “as critical and poignant and relevant today as they were 50 years ago.”

The political climate and values in California “are in sharp contrast to our national values,” she said, calling for the state to lead the way in funding education and paying teachers, providing health care, building housing and bolstering the “social safety net” for those living on the streets.

“I believe society should be measured by how treats its most vulnerable people, and we are failing in too many ways on this homelessness issue,” Wicks said.

“We need to live up to the dream of equity and equality,” she said. “We need to lift up those who stuck at the bottom. We need to fight systemic racism that we see and that many of us experience.”