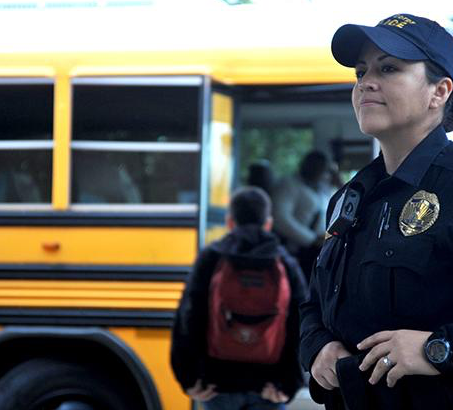 Jan 27, 2019
RICHMOND — The Richmond City Council on Tuesday will hear a report from the police chief about the anticipated rising costs of staffing local schools with police officers. According to a staff report by police Chief Allwyn Brown, the year-over-year costs to the city to continue the School Resource Officer (SRO) program “have gone up, and they are expected to increase significantly in Fiscal Year 2019/20.”

As part of the SRO partnership with the West Contra Costa Unified School District, the city provides uniformed police officers at Richmond high and at middle school campuses. Officers are specially trained for the assignments.

According to an April memo from school district Superintendent Matthew Duffy, WCCUSD is the only school district in Contra Costa County that currently pays 100 percent of the costs for SRO staffing.

However, because of its significant budget challenges, the district is proposing shifting to a 50-50 cost-sharing arrangement with local cities for the 2020-21 school year, according to the city staff report.

Additionally, a new clause in the agreement between the city of Richmond and the school district obligates the city to provide a dedicated police presence at designated extracurricular activities. The additional overtime costs are projected at or near $232,089 for the current fiscal year, and must be absorbed in the police budget.

“This is an alert that future funding to support SRO programs through the WCCUSD will most certainly decrease substantially in the coming budget year,” Brown wrote in the staff report. “A significant increase in financial subsidy would be necessary to continue the Richmond SRO program as is.”

Brown also noted in the report that while the SRO program has been credited with creating a more positive, safe climate on school campuses and better relationships between police and the community, legitimate concerns have been raised about the potential for “SROs to have a negative impact on students through unnecessary arrests and improper involvement in routine school discipline matters. Proper hiring, training, evaluation and selection of the officers to be integrated into school communities is of crucial importance.”