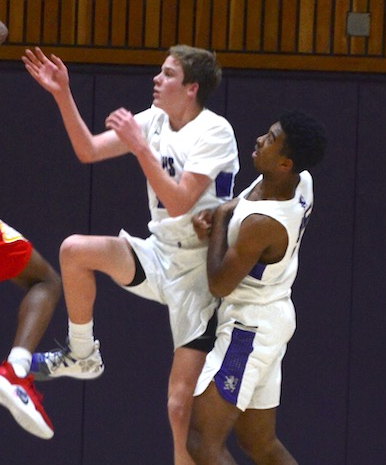 Piedmont High School boys basketball coach Mike Hudson complained after his team’s Martin Luther King day loss to University-San Francisco that his team got off to a slow start.

Two days later, the Highlanders got off to an even slower start. Playing a pretty competitive San Leandro team on the road on January 23, Piedmont fell behind 17-2 at the end of the first quarter. Amazingly, the Highlanders battled back and made a game of it, having a chance to hit two free throws in the fourth quarter to cut the deficit to four. Alas, it wasn’t enough and the Pirates held on for a 61-54 victory.

“We were fighting uphill the whole game,” Hudson said. “If we didn’t start like that, I don’t know what would have happened. Seventeen to two is a tough lead to come back from.

The loss dropped the Highlanders to 13-7 on the year, 2-3 in West Alameda County Foothill League play.

The Pirates (16-4, 4-1) had too much Keshad Johnson. The 6-foot-7, 200-pound power forward (a commit to San Diego State University) scored eight points in the first quarter to help his team build the lead, then 18 in the second half to help stave off Piedmont. He finished with game-highs of 28 points and 10 rebounds. Johnson scored from all over, burying two 3-pointers early and throwing down multiple dunks.

Outside of Johnson, the Highlanders played pretty good defense. They forced 24 turnovers and held the rest of the Pirates to 37 percent (10 of 27) shooting from the floor.

Meantime, Piedmont couldn’t get its offense going in the first quarter, making just one of 12 shots (eight percent). DaRon Benson helped get things going in the second quarter, scoring 10 of his 14 points as the Highlanders began chipping away at the lead. They got it down to eight late in the quarter and went into the locker room down 28-18.

“I was proud of (Benson’s) efforts,” Hudson said. “He came in and changed the dynamic of the game. Normally he starts for us. He came off the bench. Sometimes you want to wake guys up and I think that really woke him up. I’m proud of the way he came out. He played a really good game for us and he particularly gave us a chance to win that game. That’s all you can ask for.”

Luke Barrett was held to two points in the first half, but he broke out in the second half for Piedmont, finishing with 20 points before fouling out late. Barrett hit two 3-pointers in the third quarter as the Highlanders edged closer, trailing 41-34 entering the final period.

In the fourth, Piedmont stayed within shouting distance, thanks to Benson, Barrett and Carvel Tefft (who scored six of his 10 points in the quarter). But the Highlanders could never quite get that score to make it a real game. San Leandro led 43-37 and Piedmont had the ball, a chance to get it to five. David Kisieu’s shot was blocked by Ciri Sawyer. T.J. Kilgore got the rebound and got the ball upcourt to Johnson, who threw down a dunk to get the lead back up to nine.

With one minute, one second left, the Pirates were up 58-52. Kisieu went to the free throw line for a one-and-one but missed the front end.

Piedmont kept the rebounding even at 29-29. Tefft and Jordan Hunt each grabbed six rebounds.