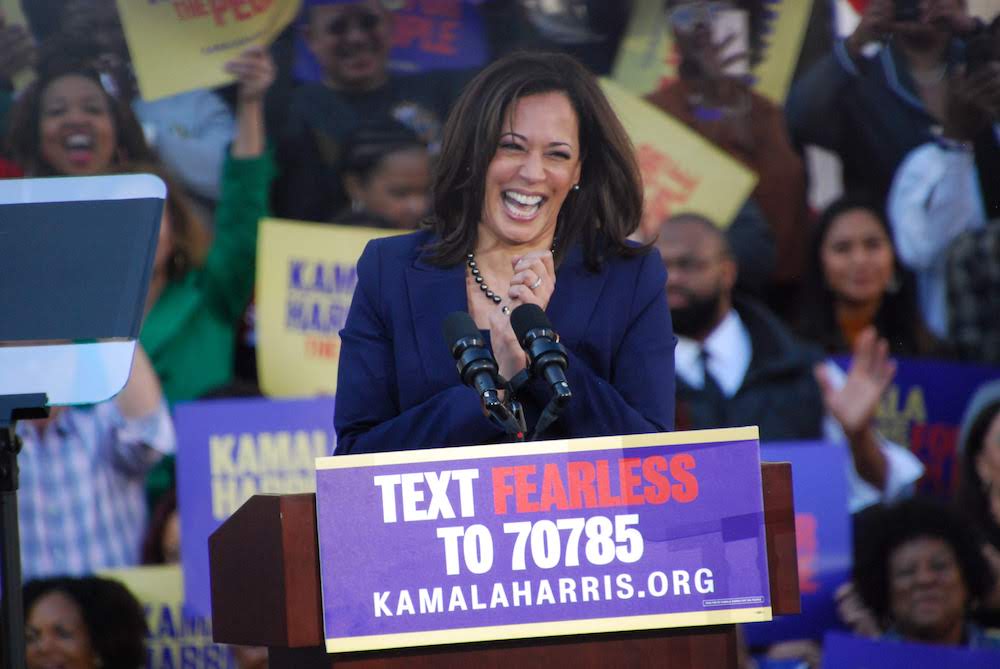 US Sen Kamala Harris (D-California) at the first campaign rally of her presidential campaign on January 27 in Oakland, CA.

Jan 27, 2019
OAKLAND — U.S. Sen. Kamala Harris leaned into her experience as a prosecutor while laying out a progressive agenda, including calling for Medicare for all and criminal justice reform, in Oakland Sunday during the first campaign rally of her run for President of the United States. Oakland police estimated that 20,000 supporters attended the rally in Frank Ogawa Plaza downtown, lining up all morning.

Harris, a Democrat and longtime Bay Area attorney and politician, announced Monday she is running for president on Monday, along with the location of her first rally – her hometown of Oakland.

In the process, she picked up one of her first endorsements, from Oakland Mayor Libby Schaaf, who introduced Harris Sunday with an energetic speech. Schaaf called on the crowd to fight for Harris, as she said Harris had fought “for the people.”

Schaaf and Harris met 23 years ago in Oakland, before either entered politics, Schaaf recalled. Harris later said that their mothers had been friends, and said the two had a “longstanding friendship.”

“She is one of the earliest leaders of criminal justice reform, back when it was still popular to be tough on crime, she was smart on crime,” Schaaf said.

But while Harris campaigns on her record as a prosecutor, it’s that record that has been the source of most of the criticism she has received from the left. She has been accused of being complicit in perpetuating racial inequities in the criminal justice system, and of not being aggressive enough prosecuting financial crimes.

She was interrupted by a protester while discussing this tension. “Now I knew our criminal justice system was deeply flawed, but I also knew the profound impact law enforcement has on people’s lives, and its responsibility to give them safety and dignity,” Harris said, before she was interrupted. She handled the interruption with grace, smiling and saying, “And on that point, I believed then, as I do now, no one should be left to fight alone.”

There were few protesters outside the event, and the crowd was enthusiastic overall for Harris’s candidacy.

Harris’s roughly 40-minute speech laid out a bold progressive agenda, saying she would work to tackle income inequality by raising the minimum wage, declare the epidemic of opioid addiction a national public health emergency, “but we don’t need another drug war,” and drew loud cheers by declaring that climate change is real, and said she would govern by “science fact, not science fiction.”

She said she considers health care and education to be fundamental rights, and said she supports expanding the Medicare program, now mainly only available to people over 65 years old, to all Americans.

“We will deliver the largest working and middle class tax cut in a generation,” Harris said. “And we’ll pay for it by reversing this administration’s giveaway to the top 1 percent.”

Harris rarely addressed President Donald Trump, her likely opponent should she receive the Democratic nomination. But she alluded to him often, and addressed his presidency directly on several occasions.

Again summoning her experience as a prosecutor, she touted her record prosecuting transnational gangs, fighting against “their persistence and their ruthlessness.” “On the subject of transnational gangs, let’s be perfectly clear: the President’s medieval vanity project is not going to stop them,” Harris said, referring to Trump’s demand for a new wall on the U.S.-Mexico border.

“Under this administration, America’s standing in the world has never been weaker,” Harris said, citing a rise in authoritarianism throughout the world attacking Democratic norms.

She also alluded to the investigation into possible influence of the Russian government in the Trump administration: “When we have foreign powers infecting the White House like malware.”

Harris, 54, was born of a Jamaican father and an Indian mother. She would not only be the first woman to be elected president but the first Black woman and first Indian woman. She acknowledged she faces a tough road to election.