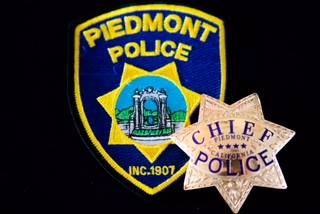 The Piedmont Police Department (PPD) reports that two suspects connected to a strong-arm robbery on December 12 at the corner of Wildwood Ave. and Grand Ave. were apprehended that same day on Trestle Glen Road. A third suspect remains at large.

The suspects allegedly assaulted the victim repeatedly and robbed him of a laptop during the confrontation. Derick Jamal Rowell, 26, and Charles Ranando Stewart Jr., 29, both from Oakland, were charged with robbery, assault, conspiracy and probation violations and are in jail.

According to the PPD notice, the victim was walking northbound in a crosswalk, smoking a cigarette.  While in the crosswalk, he was approached from behind by the first suspect (identified as Derick Rowell) and asked if he had a lighter. The victim gave him his lighter.  The suspect used and returned the lighter and then walked away towards Wildwood Ave.

Shortly thereafter, the victim was on the northeast corner of the intersection and was asked by a second suspect (identified as Charles Stewart) if he had a lighter, which he thought was unusual. Before he could react, he noticed Rowell walking towards him. At the same time, Stewart wrapped his arms around the front shoulders of the victim. The victim grabbed his laptop bag, which was crossed draped around his right shoulder. Both suspects began punching the victim in the head, causing him to fall to the ground.

The victim said he felt approximately 30 punches to his head and shoulders. The suspects took the victim’s laptop and fled in a vehicle with another occupant. Witnesses described the getaway vehicle and PPD officers immediately responded to the scene and began to search for the suspects and suspect vehicle.

Officers located the suspect’s vehicle on St. James Dr. and another witness noticed the suspects running towards Trestle Glen Drive. Both Rowell and Stewart were located and arrested on Trestle Glen Rd. The third suspect was not located and the laptop is presumed to be with the third suspect based on video evidence.  The suspects were positively identified by the victim and witnesses. Both suspects were arrested and transported to jail