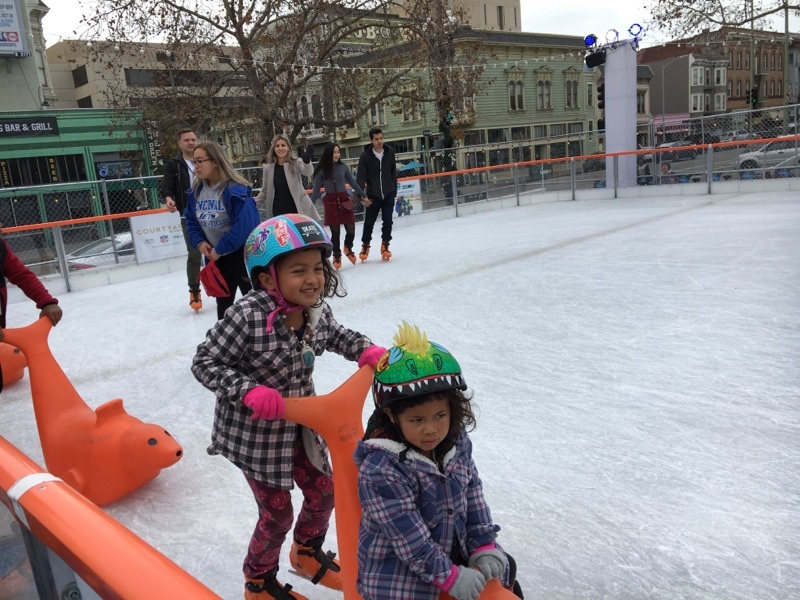 Decked out in full skating regalia including a blue helmet, Paloma Urbi-Simms, 5, of Oakland, ventured onto the ice at the Old Oakland Holiday Ice Rink with her sister Frida Saturday afternoon. She was surrounded by skaters of all ages and abilities at the pop-up rink, which opened for business at Ninth and Washington streets in Oakland on Friday and will be open through Jan. 6, according to Scott Williams, chief executive of Ice America.

About 30 skaters were on hand Saturday, some clinging to the rails surrounding the 82′ by 50′ rink, others confidently gliding across the 4,100 square feet of ice at the temporary rink in Old Oakland. Paloma’s sister Frida, 3, took a seat on one of the small orange plastic swans for rent at the rink, and Paloma pushed her around the ice – at first with ferocious concentration, then with a smile.

Hannah Nguyen of Oakland and Tom Long of Alameda, obviously veterans, glided effortlessly across the ice as Frank Sinatra belted out “Let It Snow,” on the sound system. “I try to ice-skate every holiday,” Nguyen said. Usually she skates in San Jose or San Francisco. “I was excited to hear they were opening one in downtown Oakland.” As for Long, “I rollerbladed when I was little,” he said in explanation of his ease on the ice.

The pop-up rink is the result of collaboration between Ice America, the owner of the lot and Ice America, Williams said. More information is available at the Visit Oakland website.