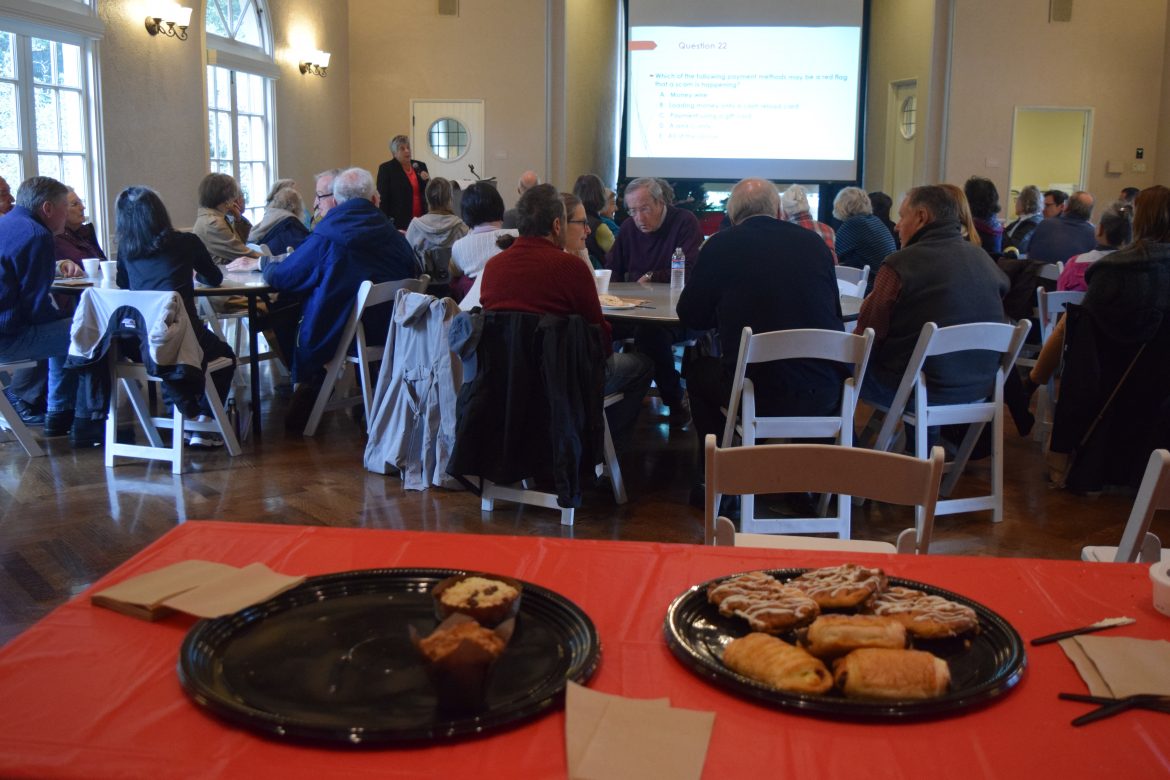 In warning a group of about 50 people Wednesday about the wide array of scams out there aimed at separating seniors from their money, Cheryl Poncini admitted she was “painting an abysmal picture of reality” and the need to keep careful watch at all times.

“There are crooks who’ll do anything to get money from others,” Poncini — a deputy Alameda County district attorney — told a gathering at the Piedmont Community Center for a police department seminar on how to avoid becoming a victim of increasingly common scams specifically targeting seniors. The only way to stay ahead of increasingly clever “fraudsters,” as she termed the bad guys, is to be wary and embrace the notion that the modern-day battle fronts are multiple.

“Awareness of everything around you is a key,” Poncini said.

Using a scam-trivia game to test attendees’ knowledge, Poncini covered the well-known ways financial information can be stolen (online, telephone and mail solicitations, mail theft, credit- or debit-card theft) along with relatively new twists on old cons. She asked the room whether anyone knew what the “blue box scam” was. (A few did.) This is when fraudsters literally go fishing in a blue Postal Service delivery drop box, like those found in front of post offices. It often involves a string tied to a paper covered with glue, dropped down into the box, and seeing what sticks when the string is pulled out.

If envelopes with checks come out, Poncini said, those names and amounts written on them can be altered, resulting in the loss of not only money, but of financial data and even identities. When using those post office “blue boxes,” Poncini said, don’t place mail in them after the final pickup time of the day. It’s after dark, she said, when the folks with sticky paper and string do most of their fishing.

Piedmont, with its affluent demographic, is a popular target of fraudsters, Piedmont police Det. Jeff Spranza acknowledged, though far from the only one.

“Zip code plays a role, especially in ID thefts,” he said after Wednesday’s presentation. And within Piedmont’s affluent-demographic zip code, he said, seniors are the most-often-targeted group.

“In a town like Piedmont, we still have a lot of old-school mentality of holding on to documents, instead of shredding them,” Spranza said.

And whereas a paper shredder was once considered a sure-fire way to foil those who would plunder old records that were simply thrown away, that defense requires more specificity now, Poncini said. A cross-cut or micro-cut shredder, she said, is a must; the strips of records that come from a strip-shredded are too easily reassembled by kids hired to recreate pages by taping segments together.

Poncini offered other common sense advice:  Don’t buy “miracle” medical products advertised on late-night TV infomercials; don’t give in to contractors or others ostensibly already doing a job in the neighborhood and offering leftover material that could fix your roof, gutters or anything else; inspect Medicare records to make sure you weren’t billed for services not received; and even with trusted friends or family overseeing a senior’s financial affairs, have two or three people looking over those affairs (and keeping a check on the other overseers) is good insurance.

Barbara Widmer and her husband Richard Wrenn of Piedmont were in the audience Wednesday. The “blue box scam,” they said, was a revelation. They haven’t been scam victims yet, Widmer said, but the fraudsters are knocking on the door.

“I got a suspicious text message about claiming a $1,000 gift card,” she said. “Probably a scam.”

In addition to a chance to get out and socialize a bit, she said, Wednesday’s seminar “makes us more aware of the issue and about the problems and what we can do about them.”

Poncini said she leads similar senior scam-protection seminars often, typically several times a month. There’s always a lot to teach, and to learn, and the fraudsters keep getting more clever. Anyone who wants to contact her about senior fraud issues can email her at cherylponcini@acgov.org.