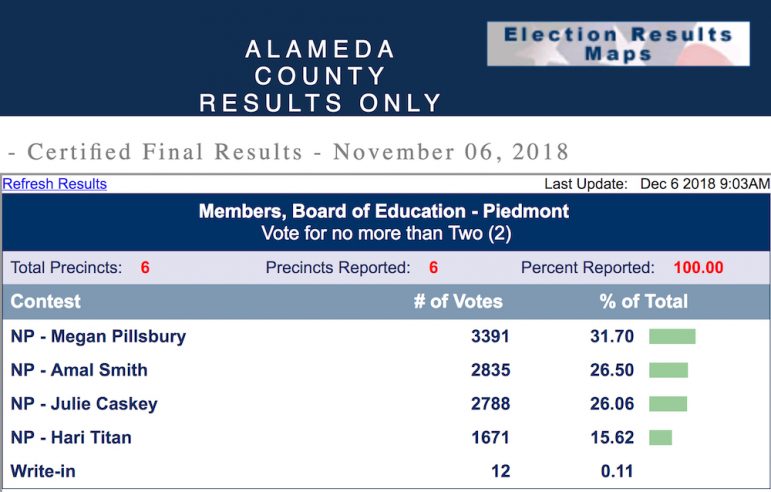 November 6, 2018 Alameda County election results for the PUSD School Board

The final results of the school board race are in, with Megan Pillsbury as the top vote-getter with 3,391 votes. Second place was not decided until almost a month after the polls closed. Ultimately, incumbent Amal Smith earned a second term ahead of Julie Caskey by a mere 47 votes. Both Pillsbury and Smith will be officially sworn in at this week’s PUSD school board meeting on Wednesday, December 12 at City Hall. 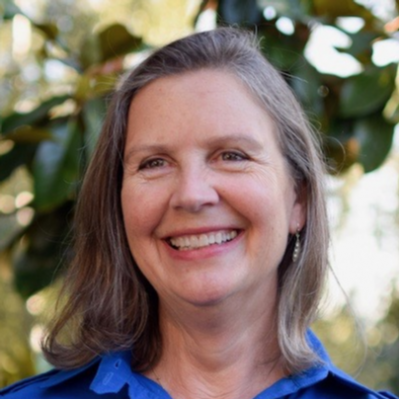 Pillsbury’s top three platform priorities were to strengthen communication among families and school staff and representatives, foster programs to promote responsibility, respectfulness and well-educated citizens and to keep district expenditures aimed at the greatest student impact.

Pillsbury is the mother of three adult children, two daughters and a son, who attended Piedmont schools. She taught second grade, first at Havens, then at Wildwood, for a total of 16 years. After her retirement from the district four years ago she worked at Lawrence Hall of Science. She ran for a seat on the board because she believes, “This is a time when good people need to get involved in shaping their community.”

“It felt like the right time,” she said. “I want to make good on the campaign promises. We need to be creative how to direct funds. We’re in a pinch with the budget as is every district in California. And we need to anticipate a parcel tax, since about 40 percent of our district’s funding is through local revenues.”

Incumbent Amal Smith followed with 2,835 votes. She has been the vice president on the school board the last two years and has maintained a busy schedule of meetings as board liaison to a host of school-affiliated organizations. Smith previously worked in the financial affairs office at the University of California and now is associate dean of financial affairs at UCSF’s School of Medicine. In earlier volunteer work she served on the Beach Parents Organization, the PEF board, PHS Boosters and the most recent parcel tax campaign. She and her husband Rick raised two sons who attended Piedmont schools K-12.

Though she maintained her seat on the board, the final days of the race and those following were a “nail-biter” according to Smith. “This is evidence that every vote counts,” she said. With the race now settled, Smith noted the H1 bond facilities work, the upcoming parcel tax campaign and staff recruitment and retention are among the key issues, including education equity, inclusion and student-well-being that will keep the district and the community-at-large focused on Piedmont’s schools and students. 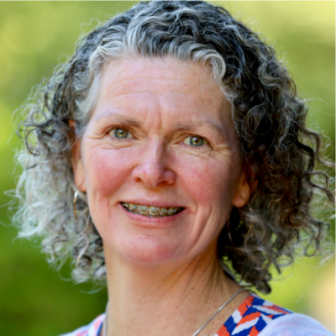 Julie Caskey, a civil rights attorney and mother of four Piedmont students, earned 2,788 votes. Caskey came extremely close to unseating Smith. “I ran a robust campaign,” she said. “It was interesting and meaningful. I feel so grateful to have received so much support throughout Piedmont, and so many generous neighbors who gave their time, energy and money to support my campaign. A lot of people have asked if I will run again, and I’m going to see how I feel in a while.”

Ms. Caskey  has a record of volunteerism on a host of school-related organizations, including the Citizens Oversight Committee, the PEF Grants Committee, Beach Parent Organization, PMS and PHS Parents Clubs, PHS Site Council, the PADC Board, and more.  With the election decided, she is considering options to continue her work toward children’s advocacy.  “Education funding in California is an issue I’m very interested in,” she said. “I’ve been a longtime lawyer for children, in child advocacy, and juvenile and criminal justice. I will aim in that direction and stick with other things I’m doing.” 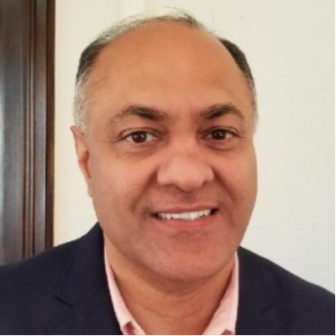 Candidate Hari Titan ran for a board seat for the third time. He drew 1,671 votes. He too has been active in local school initiatives, particularly around the bond issuance. He is a big data scientist and father of two, one of whom attends Piedmont schools. He did not respond to a request for comment.

Of  the 7,015 ballots cast for the school board election for two seats, more than 3,200 voters chose only one candidate, using a practice referred to as “bullet voting.” Another 100 voted for three candidates even though there were only two seats available. There were 12 write-in ballots cast.