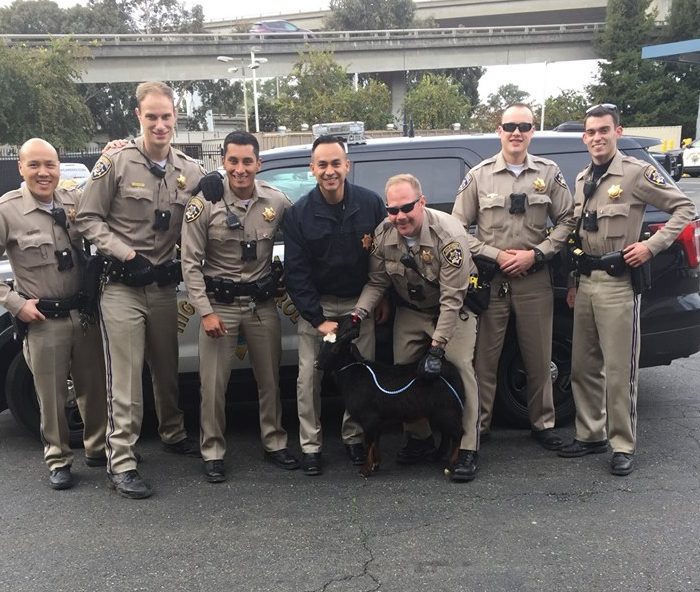 Courtesy of the California Highway Patrol

December 17, 2018 — A nimble goat that managed to elude traffic on busy Interstate Highway 880 and led officers on a chase through city streets was safely corralled this afternoon, the California Highway Patrol said.

The black goat was first spotted about 12:15 p.m. running on a ramp and in the freeway’s center divide near the 23rd Avenue onramp. At one point, the goat crossed all southbound lanes of 880 and wound up on the west side of the freeway under the 16th Avenue overcrossing, according to the CHP.

From there, it ran onto city streets into Oakland’s nearby Jingletown neighborhood, where it wandered into a shop at one point, the CHP said. At that point, CHP officers thought they had finally corralled it, but the goat escaped again, said Officer Herman Baza.

Shortly before 2 p.m., Baza was able to grab it by the horns when it ran under a big-rig parked at East Seventh Street and Derby Avenue. “I’ve caught dogs in the freeway before – but this is a first for sure,” Baza said.

Good Samaritans gave the CHP rope to tie up the goat, Baza said. The goat, which Baza said weighed about 100 pounds, was uninjured and will be taken to animal control, Baza said. It’s not known who owns the goat or how it wound up on the freeway, Baza said.