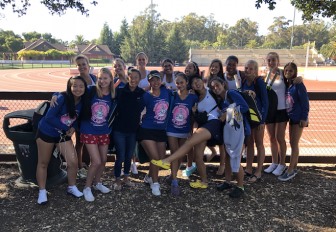 After much back and forth, the Girls Varsity tennis season officially ended Thursday without a North Coast Sectional (NCS) match. The cancellation of NCS tournament is unprecedented. Delayed several times because of smoke and then rain, rescheduled and then cancelled again due to more rain. The finale of the season was dragging on with no resolution. Finally, on Tuesday, there looked to be a light at the end of the tunnel when coach Jim Landes got the call from NCS that the matches were back on for tomorrow. That light at the end of the tunnel turned out to be a train — the other three schools (Branson, Head Royce, and Bishop O’Dowd) all declined to play, because the long delays meant that the girls had moved onto other sports.

Leila Kasrovi, parent of seniors Kiana and Lauren Kasrovi, said, “They are very disappointed, especially some of our seniors who have been playing on Varsity since freshman year and were really looking forward to their fourth NCS championship.”

Luckily, three members of the team qualified to play in D1 championship in Fortuna as individual event. Angela Huang won all four singles matches in straight sets, her second NCS singles title in three years. Makenna Thiel and Lauren Young teamed up to place third in the D1 Doubles championship.

“Our team has had a great year,” said Landes. PHS won league championship and had 25 wins, 2 ties, and 2 loses. “For the first time, we had the opportunity to play in one of the best tournaments in the country this season at Stanford. PHS came in 10th place at that tournament, placing considerable higher than all other NCS teams.”

Landes continued, “I’m really proud of this year’s team and next year will be a building year. We will still be good, but not as good.” There are seven seniors on the team and star player, junior Makenna Thiel may not play with PHS next year.