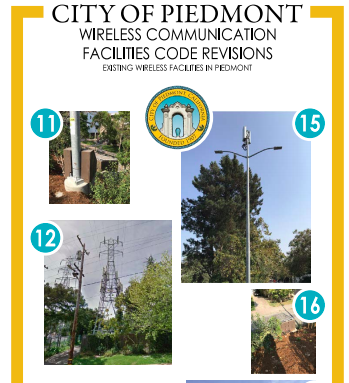 The City Council on Monday could approve a settlement agreement with Crown Castle over a year-old lawsuit stemming from rejection of locations for cell-phone booster equipment within the city.

The tentative settlement calls for a total of 19, up from the original nine, sites of wireless “nodes” designed to boost wireless capabilities. Each of these sites within Piedmont would have smaller equipment than originally proposed by Crown Castle NG West in November 2016, and should be less “visibly obtrusive” than the originally proposed equipment, the city says.

Crown Castle, a Texas-based company, builds wireless communication antennas and related support facilities. The company in November 2016 approached Piedmont officials with a proposal to build the new antennas to improve the coverage of Verizon phone service in Piedmont. Crown Castle would have then leased the cell facilities to Verizon. Several public hearings ensued, where many residents complained the wireless fixtures would present aesthetic, property value and safety concerns.

On Oct. 16, 2017, the City Council denied five Crown Castle antenna site requests, and approved four. But even the city’s conditions for the approved sites were “so onerous that they are tantamount to denials themselves,” Crown Castle said in its lawsuit against the city, filed Nov. 16, 2017 in federal court.

The suit contended Crown Castle had done significant reworking of its plans to come up with smaller antennas, less intrusive antenna sites, lower heights and above-ground equipment cabinets to replace underground vaults, all at the suggestion of Piedmont planners. The suit also contended the City Council didn’t allow Crown Castle to present a comprehensive response to the concerns of the council of city staff and of the public at public meetings..

Since March, city staff and legal counsel have been meeting with Crown Castle in federally supervised confidential mediation sessions. From those sessions has come the proposed settlement agreement coming to the council Monday night. .

In addition to the 19 sites (one of them already approved and not being disputed), the settlement agreement proposes that the public will have the chance to comment on the plans for each of the 19 sites. Those comments would be taken during public hearings at Planning Commission and City Council meetings.

Vice Mayor Teddy Gray King and Councilwoman Betsy Smegal Andersen will have to recuse themselves from the settlement discussion and vote regarding four of the 18 sites under discussion. Gray King lives within 500 feet of a potential wireless facility at El Cerrito Avenue, and Andersen lives within 500 feet of three potential wireless facilities — sites at on Jerome Avenue, Magnolia Avenue and MacKinnon Place. Under the state Political Reform Act, both women  could conceivably have a financial interest in whatever settlement decision is made.

Once those four sites are discussed, Gray King and Anderson will re-enter the council chamber and take part in the discussion concerning the other 14 potential sites.

Before Monday night’s regular open meeting, the City Council and its legal counsel will discuss the settlement in closed session.

The proposed settlement can be viewed using this link:   http://www.ci.piedmont.ca.us/html/govern/staffreports/2018-12-17/crowncastlesettlement.pdf