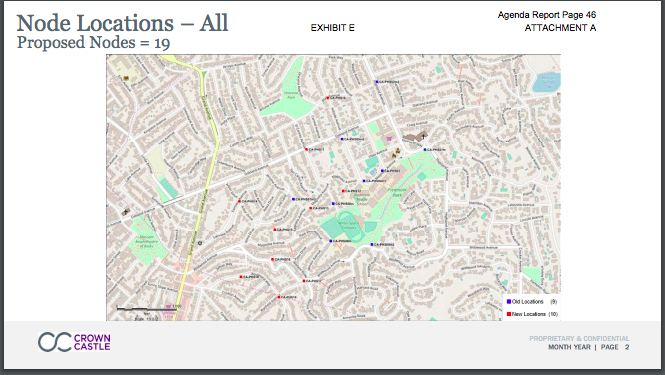 PIEDMONT — Saying the city now figures to get more acceptable cell-phone booster equipment than originally proposed in November 2016, and that the city would likely face a continued costly legal fight if it simply banned the equipment, the city Monday night approved a settlement agreement with Crown Castle that would require the company to substitute 18 smaller, less obtrusive mini-towers in place of eight larger ones.

The council voted 5-0 to settle a November 2017 lawsuit by Crown Castle covering 14 proposed cell-booster sites in Piedmont neighborhoods, after being in federal mediation with the Texas-based company since March to reach a settlement.

A 19th Crown Castle site has been approved and isn’t part of the settlement agreement.

The original lawsuit came after the City Council, on Oct. 16, 2017, denied five Crown Castle antenna site requests, and approved four. But even the city’s conditions for the approved sites were “so onerous that they are tantamount to denials themselves,” Crown Castle said in its lawsuit in federal court.

Separately, the council voted 3-0 to approve settlement terms covering four other sites;  Vice Mayor Teddy Gray King and Councilwoman Betsy Smegal Andersen had to recuse themselves from the deliberations and vote on those four sites because they each live within 500 feet of at least one of those four potential wireless sites.

The crux of the settlement calls for Crown Castle to scrap plans for nine relatively powerful cell-booster sites in favor of building 19 smaller, less powerful and less obtrusive smaller installations. These would then be leased out to Verizon, allowing that company to improve its local cell service.

The settlement wouldn’t officially go into effect until plans for each of the 18 mini-towers are approved by the city. There also will be public hearings, in front of either the city Planning Commission or the City Council, for each of the 18 facilities.

Ann Dowley, one of a group of “MacKinnon Place Neighbors” fighting cell booster placement in their neighborhood, said she believes her home could lose hundreds of thousands of dollars in resale value. Anian Tunney, a Grubb Co. Realtor/broker, echoed that idea.

“If a cell tower, no matter how small, is in front of someone’s house, (buyers) will think twice about paying $2 or $3 million for that house,” Tunney said.

Council members acknowledged they would rather simply say “no” to Crown Castle and any other company proposing to build any sort of wireless communication equipment in the city. They also acknowledged the existence of new Federal Communications Commission regulations designed to help wireless companies get faster local approvals to expand their networks; especially in public rights-of-way. The new rules go into effect Jan. 14.

Those new rules, city officials said, will make it much harder for cities to reject outright proposals from companies like Crown Castle that build and lease wireless facilities.

Council members and the city’s lawyers said Monday night that cities everywhere face a future with more companies wanting to build wireless facilities, and that the new FCC regulations help make saying “no” a difficult and potentially costly move. The Town of Hillsborough, in San Mateo County, is fighting a costly legal battle now for taking that firm stance against proposed cell facilities.

Attorney Michelle Kenyon told Monday’s audience such a battle could cost Piedmont between $250,000 and $500,000; Anderson added, “We could spend that (money) and lose.”

Dowley of the MacKinnon Place Neighbors questioned whether the settlement would prevent legal action after all. “What if 18 citizens each sue … is that more litigation than Crown Castle?” she asked.

Council members said the Crown Castle settlement will mean much more palatable cell equipment than originally proposed, and hopefully set a standard for future proposals for companies like Crown Castle to follow. And they said more such proposals are sure to come in the relatively near future.

“I have yet to see (an equipment) design that meets our needs better than this,” said Councilwoman Jen Cavanaugh.

In other Council business, Michelle Guichard was recognized Monday night by the Piedmont City Council as the department’s newest officer, shown here having her new Piedmont Police Department badge pinned on by girlfriend Tori Garcia.

New Piedmont Fire Department Lt. Zach Heliker was recognized Monday by the City Council. His wife Misty pinned his new badge, and then kissed him.

One thought on “City Council approves settlement with Crown Castle”