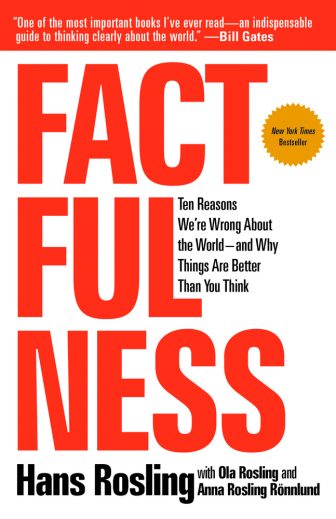 There are many problems in the world today, including authoritarian governments, racial and sexual violence, and looming climate change. So it’s very refreshing when someone comes along with good news. And that’s exactly what Hans Rosling, a Swedish physican, delivers in his new book, Factfulness.

Rosling seeks to provide fact-based information to counter ten “instincts”, or barriers, that he claims prevent people from acknowledging slow, steady improvements around the world. He uses UN data to show, among other positive changes, that extreme poverty is declining and life expectancy is increasing in almost all countries. And he offers useful advice to help us understand that while certain situations continue to be bad, they are getting better.

Chief among these barriers is the “gap instinct”, or the propensity to see the world in binary terms – us vs. them, “the west and the rest”, developed vs developing countries—when the reality is much more complicated. Rosling presents a fascinating graphic on the inside front cover of the book that plots incomes and lifespan (his surrogates for overall wealth and health) for all 195 countries across the globe. Instead of dividing the world in two, he frames almost every discussion in the book around an analysis of four basic income levels, and focuses on how almost all countries have moved up and to the right on this chart (i.e., to more wealth and better health) over the past two centuries. Rosling uses his native Sweden to show how countries progress over time, and to show which countries today compare to Sweden at various points in the past (page 57). (See YouTube also for a fascinating video called 200 countries, 200 years, 4 minutes, which illustrates the fluidity of this phenomenon.)

The next major barrier is the “negativity instinct”, which involves an often vicious cycle of media reporting bad news – war, violence, scandal—and people thinking that’s the only news out there. Rosling again urges readers to look beyond the scary headlines to data showing improvements in many areas. He presents charts of 16 “bad things decreasing”, including many diseases, hunger, deaths from disasters, and environmental toxins, and 16 “good things increasing”, including girls in school, literacy and immunization rates, “protected” nature and clean water (pages 60-63). Rosling doesn’t want to be seen as a Pollyanna, but neither does he assume the cynical tone of the eternal pessimist. Instead, he considers himself a “possibilist”, acknowledging that while much needs to be changed, much can, and already has been, improved.

The third major barrier is the “straight lines instinct”, in which people assume that troubling trends will continue at the same rate, instead of leveling off or even declining due to changes that reflect broader improvements. Rosling’s main example here is population increases, which have rocketed upward in the past 100 years. But according to UN forecasts, these increases are expected to grow less quickly over the next 100 years, due to declining birth rates that in turn stem from less poverty, better education, and more access to contraception in lower income countries (pages 80-86). More generally, instead of projecting from just two data points, Rosling encourages the search for additional data that might reveal the real long-term trend.

Sadly, Rosling died in 2017 (his son and daughter-in-law finished the book, and continue his work). But his writing retains an infectious enthusiasm for the topic; you can imagine him jumping up on a table while giving one of his TED talks. The material does get a bit repetitive towards the end of the book, and at times Rosling seems to strain to fit all trends into his “glass half full” model. (For example, are much higher rates of cell phone ownership and internet usage necessarily good things on all income levels?) But I appreciate his effort to keep hammering away at the well-fortified barriers we’ve erected, especially the privileged few (one billion of the seven billion total) on income level 4. A fun feature of the book is the set of 13 questions at the beginning. These test our assumptions about the world and show, to often humorous and withering effect, how even the most highly educated don’t know much about the world as it is, and is becoming. Rosling ends with a clarion call for humility and curiosity; be humble in the context of a growing, uncertain world, and remain curious about other people, ideas, and possibilities for improvement.

One thought on “Book Review | Factfulness”