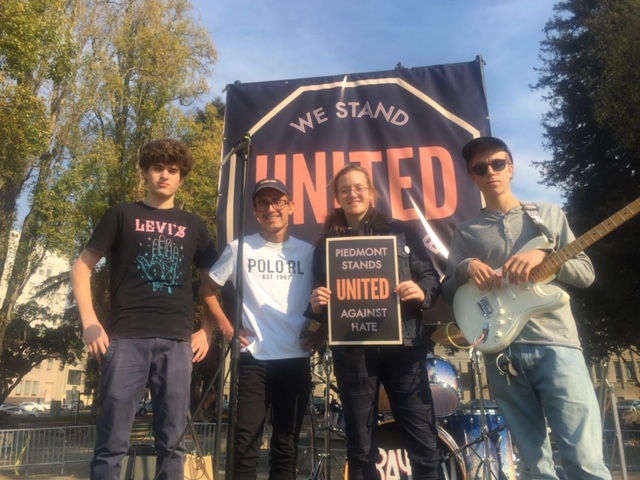 On Sunday, November 11 in Berkeley’s Civic Center park, Piedmont city and school leaders joined others from around the East Bay to kick off a week-long series of events to promote the United Against Hate campaign, an initiative to “restore respect and civil discourse, embrace the strength of diversity and build inclusive and equitable communities for all.” The United Against Hate week was conceived by the Oakland-based nonprofit Not in Our Town, and is an outgrowth of the poster project that started in Berkeley when members of white supremacist groups began a campaign to hold rallies in Berkeley and Oakland in 2017.

The Fiero family at the Berkeley kickoff

Bay Area cities hosted a variety of events including films, workshops, and more. Upcoming events in Piedmont include the Readmont: One City, One book project that will be reading and discussing Bryan Stevenson’s Just Mercy this Spring and the Diversity Film Series’ next film “I Am Not Your Negro” that will screen in Piedmont on 11/28 (and in Oakland on 12/1.)

Piedmont schools participated in the weeklong event in a numberof ways, including hosting Becoming an Ally workshops for PMS, MHS, and PHS students, highlighting books in the libraries that focused on inclusion, acceptance, and equity, and PMS participated in No Place for Hate, a national program supporting schools in their commitment to celebrating diversity, promoting respect for differences and challenging bias and bullying at all levels.