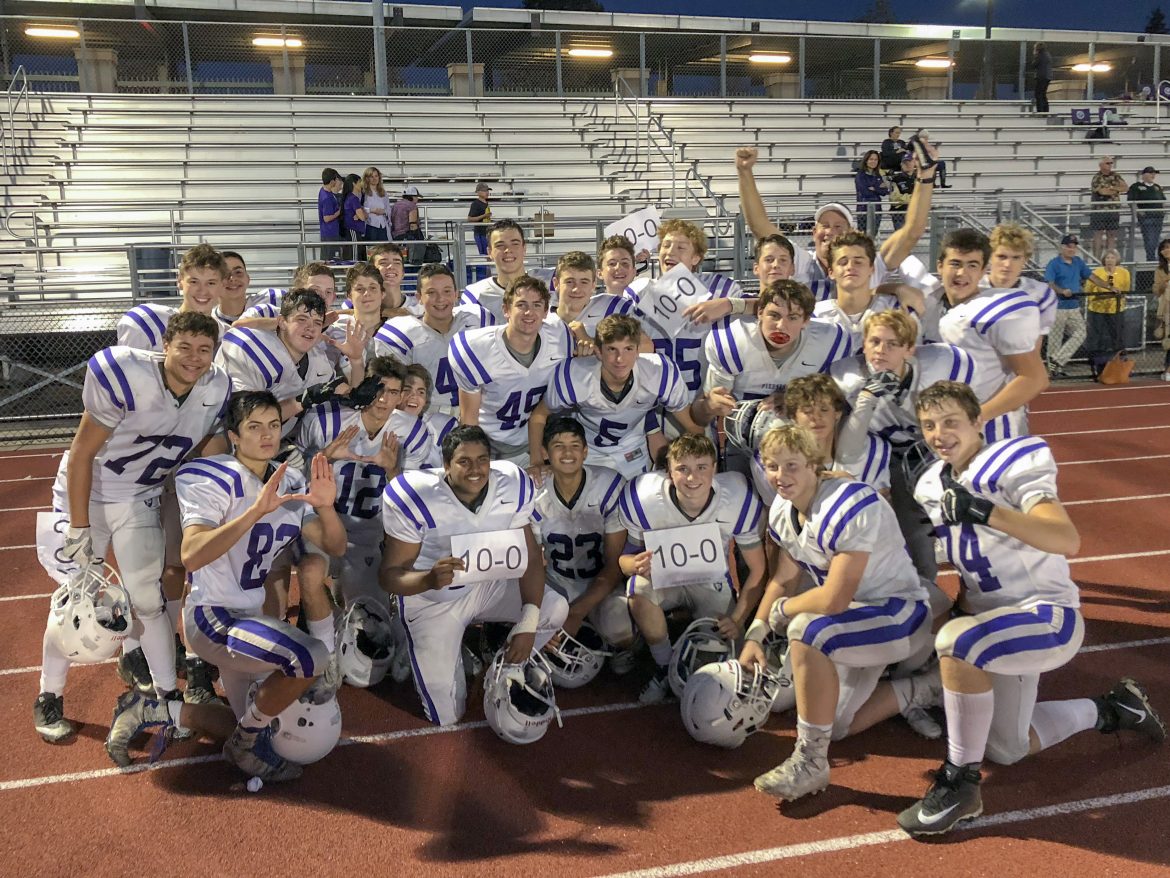 A large group of sophomores formed the core of the team. Their preparation began last April, when roughly 24 sophomore and 10 freshmen boys, affectionately known as “the puppies”, showed up four days a week for a rigorous fitness and strength program with Coach Nikolai. Coaches Calin Gribble and Mike Wong added to the coaching mix and set the boys straight during sprints which both coaches participated in. The boys’ tireless commitment gave them both a mental and physical head start as we entered the summer workouts. When fall practice began, the boys were fit and strong. Under the skilled guidance of JV head coach Tom Casassa, the boys quickly learned new offense and defense, similar to those used by the varsity team, headed by Coach John Trotman.

Coach Casassa’s offensive philosophy was to “take what the defense will give us”, and a 4-yard gain is “just fine”. Coach Conlon had the offensive line coming off the ball and running backs Brian and Nicky consistently gained ground in large chunks. Quite a few of our “just fine” 4-yard passes or runs were turned into long gains due to the determination and athleticism of our blockers and runners. Under the steady leadership of QB Tommy McNeil, we had good balance between run and pass (around 65% run and 35% pass) which seemed to allow for great ball control and long sustained drives which usually resulted in scoring opportunities. The boys scored 294 points this year, which was an average of 29.4 points per game!

Defensively, the boys really stepped up. The defensive mantra was to Attack, Attack and then Attack. Our view of each drive was  “Bend But Don’t Break”. Our goal each game was to take away what the offense wanted to do. Based upon solid practices, film study and preparation each week, our defense would be ready for what our opponent thought they did best. The boys stepped up time and again, shutting down high-powered players and entire offenses. One of the high points of the season was our total shutdown of the high powered offense of archrival Bishop O’Dowd, holding them to only 7 points. Over the season, we gave up only 74 points (7.4 points average per game!). Game after game, the boys made big plays, recovering 10 fumbles, making 10 interceptions, and sacking the quarterback (many times!). When adversity would strike, our defense would step up. It was really quite amazing to watch,  as they never showed anything but resolve to make that next stop. It was a true team defense, with gang tackling, team pursuit and different players stepping up each week to make a critical play at a critical time. Coach Carter had the defensive line creating havoc all game, every game. The disruption by our defensive line caused our opponent’s offenses great distress and frankly set the tone for winning defense every game.