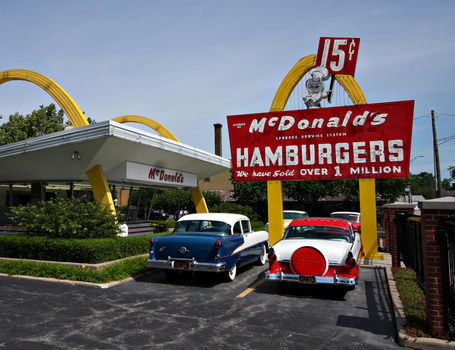 This is the second article in a series: “Fame, brand, spin, debt and and the slow corruption of moral neglect.”

Democracies operate on trust.  We trust the opinion of a “quality person,” and that helps us divide up work and share responsibilities.  A lot of times people use someone’s “brand” as a shorthand for quality.  But brand – like fame — has been transformed through technology.

Branding is a simple enough idea.  You produce something you are proud of and you put your name on it.  Whether it’s the symbol a rancher seared into her cattle’s hide, or the stamp Paul Revere put into his bowl, a brand was only as valuable as the quality of the products they produced.

We depend on a tight fit between brand and quality.  One of the world’s most successful brands for many years was McDonalds.  Their business was built on meeting a specific universal need for every single American: namely, finding a clean toilet away from home.

With the advent of highways, business people and families were all driving to places they didn’t know.  There were billboards promising the best food, or the best bargain, but no one advertised — “come use our really clean bathrooms.”  Well it turned out, people on the road didn’t necessarily need the best food, or the best bargain — they just wanted reliable food, that wasn’t too expensive.  And a clean bathroom.   McDonald’s original advertising was mostly about how clean the place was.  It’s not high art, but this is the original McDonald’s song:

“Grab a bucket and mop,
Scrub the bottom and top.
There is nothing so clean
As my burger machine!

With a broom — and a brush
Clean it up for the rush
Before you open the door,

(Spoken)_
Put a shine on that floor!

(Singing)
When we’ve finished, what then?
Start all over again!
Tell me, what does it mean?
At McDonald’s it’s clean!

You deserve a break today.

Come stop by, we’re on the way.

They didn’t even mention burgers.

McDonald’s brand was about the pride McDonalds workers took in keeping the place clean.  They measured franchisees on this metric.  They were selling an ethic of sacrifice and service to a traveler — we mop the toilet area all day long for whenever you need a break.

A national brand was a great and rare thing to achieve then.  In order to gain it, you needed to produce something that met a universal national need with the highest quality, even if it wasn’t the most glamorous one.

Big data and technology have helped change what a brand is, and how it is achieved, in important ways.  Thanks to new technologies, more things can have a brand, and people expect brands to be customized to their personal needs rather than a broadly shared experience.

This changes the equation.   It created an incentive to be fast, and to put brand first.  Rather than produce the best thing to gain a brand, the goal is simply to get your information out ahead of everyone else’s.  Rather than keep customers based on one desired feature, they hook customers with speed, and then keep customers based on other things that commanded loyalty to the brand itself.

Because the goal is locking people into a brand, speed is key.  We can actually feel this acceleration happening; like speed dating with the bells.   We went from 30-second ads, to posts, then tweets, then even shorter vines and memes and now pics.  In its time, the Gettysburg Address was considered an astonishingly short speech.  Three succinct paragraphs, delivered in 3 minutes.  It would never survive today.  It’s way too long for Facebook or Twitter or most other social media.  We’re down to three words.  Build a Wall, Stop the Boats, Axe the Tax, Lock Her Up.

And the result, again, challenges our integrity.  We are not bound to a product by its quality.  We’re bound because companies scooped up our data, got to us first, and then trapped us in their brand loyalty programs.  Brand loyalty in this context is a bit of a misnomer.  It is more like “brand hostage.”  It’s the Hotel California, “you can check out any time you like, but you can never leave.”  If you have tried changing banks, or changing mobile carriers, you know why most people remain with their original choice even if they don’t like it very much.  Airlines and hotels and others have perfected this with their bonus programs.

In the U.S., I only fly United.  I have flown over 1 million miles on United Airlines.  Even though the seats have gotten smaller, the leg room has shrunk, the miscellaneous charges have increased, they overbook their flights, they knocked out that poor doctor’s tooth for not giving up his seat, and other things that make the service less appealing than when I started; even with all that, I stay with them.  Because with any other airline, I’d be the one getting my tooth knocked out, until I earned enough human dignity points through their brand loyalty program.  So their data analytics and speed are what drive my decision, not my satisfaction with the product.

Elevating brand over quality not only degrades the consumer experience, it also degrades the company’s commitment to quality.  Products go to market with serious bugs and cybersecurity gaps because speed takes precedence.  The ethic is: “We’ll patch it later.”  News goes out unconfirmed and with major mistakes.  The ethic is: “We won’t be wrong for long.”  There’s an old saying: “if you want to go fast, go alone.  If you want to go far, go together.”  It is not clear how far this speed will take us.

Ultimately, branding for branding’s sake, divides us.  Reliable clean bathrooms are a community asset, and building your reputation on that creates trust.  A brand that isn’t based on trusted products is just a way of separating you from others.  Wells Fargo versus Bank of America.  Rather than build a community, it divides us by tribes.

Piedmont resident, lawyer and former aide to President Obama, Bleich served as special counsel to the President, U.S. Ambassador to Australia, and senior advisor. He’s led the board of California’s state universities, as well as leading the State Bar.﻿