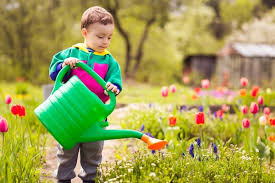 We first moved to Piedmont nearly 12 years ago, just as the bubble was bursting, and trust me we were freaked out!   Along with our beautiful, but somewhat neglected house, we acquired a scary-big mortgage and a sizable project.  But this was our dream—to take this house and make it our own.

Soon after we moved in, we realized that we were in a little over our heads. After spending the day doing yard work, I said (yelled), to my wide-eyed wife, “Don’t you think we bit off a little more than we can chew?!”  Financially and mentally overwhelmed, we realized that while the major construction project would be primarily completed by contractors. But, the smaller projects,  yard work, debris removal, site clean up, hauling, housework, etc., would need to be, as we say in the biz,  “self-performed.”  Luckily we were able-bodied, and we had two capable children aged four and seven.  Okay, nearly five and eight, but who is counting other than Child Protective Services.

My wife became the in-house project manager of sorts, and she utilized the skills of our youngest daughter, Emily, to assist her.  Mind you, Emily was only four, but she could “help” Danea with the housework, do construction clean-up and dust, because as Danea said frequently during this time, “This &%# dust is never-ending!”    The girls sorted their laundry and made their beds.    Olivia received a pair of child-sized work gloves for Christmas (not her favorite gift), and she helped me weed the yard, haul away the trimmings, and prune the roses, which caused at least one bloody finger a session.  Was it easy?  Nope.  Did we finish faster?  Nope.  Was the quality of their work good?  Sometimes. But it was better than no help at all, and the girls took pride in their work.   Maybe we could have done it without them, but that that would be missing the point of my diatribe.

It’s easy to make excuses as to why our kids can’t help.  “Kids are so busy these days.”  “Johnny needs to focus on his grades.”  “Jane’s tired after soccer.”  But by not requiring our children take out the garbage,  mow the lawn, or clean the windows, we, in all our best of intentions, are doing them a great disservice!   Chores may be some of the first tasks in life from which they get recognition of a job well done, gain confidence and learn some independence.

A wise person once said to me, “Do not raise your kids as if there is a trust fund, especially if there isn’t one.”   I firmly believe that treating our children as guests in their own home is a great misstep.  Out of necessity (and fear, I might add), we engaged our kids to help us.  Often.   They still do.  And even though they may complain, I think they will tell you they are better for it.

“This is my soap box, get your own”