As a grammar school-aged child, you did not have to worry about distracted drivers – and the school principal actually sent students into the street to manage traffic. How quaint! This was 1954 and I was Captain of the Traffic Patrol for Havens School. I would go out in the street and raise my traffic sign and bring cars to a halt. My name is Fran Bishopric Wolfe and I have lived in Piedmont for three quarters of a century. 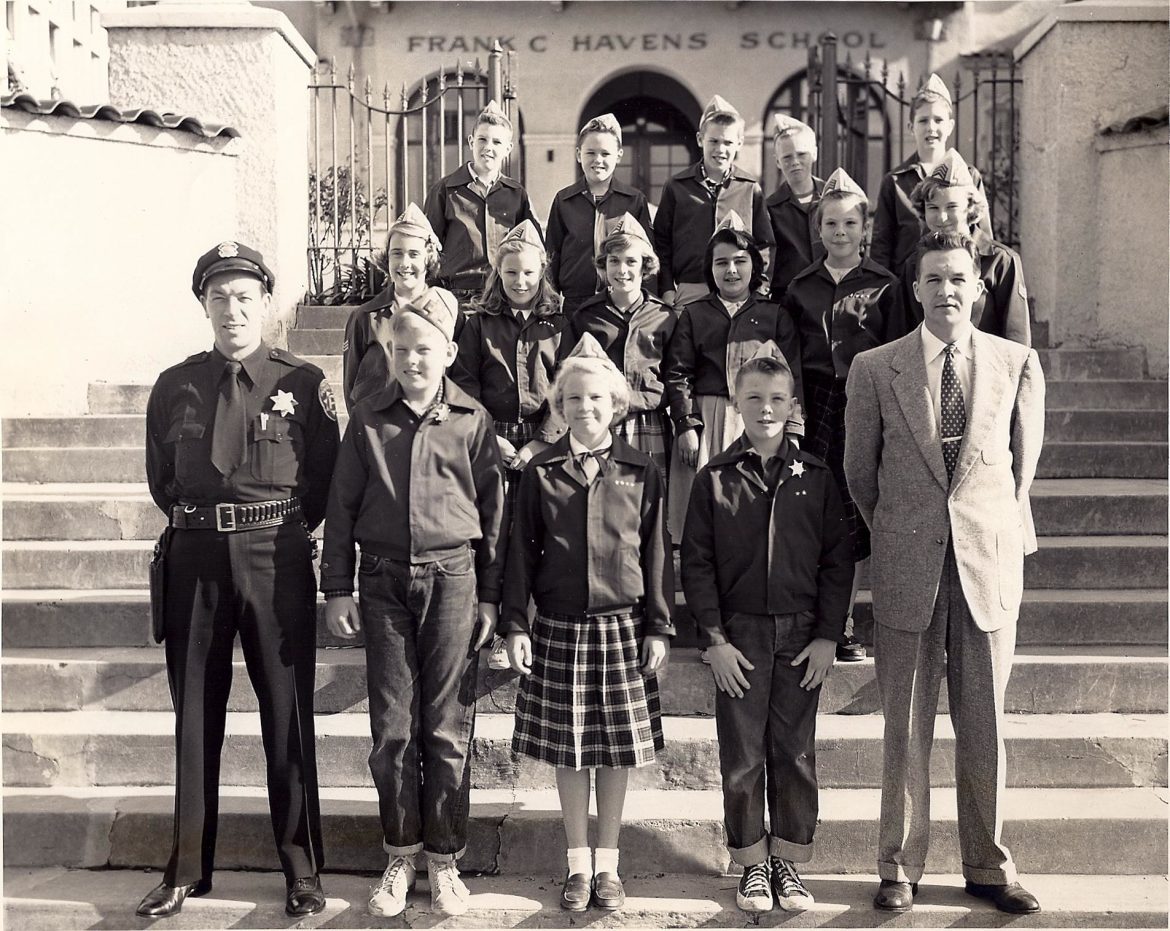 In that time, I have witnessed many things that have changed — and some that haven’t. I attended Havens School (the old, OLD Havens school designed by Albert Farr) as did our children (in the newer, old Havens school that was torn down in 2010). We walked to school every day — even though we lived in the Wildwood School District. This inconvenience was because my older sister had been naughty over at Wildwood, necessitating a transfer to Havens.  (Yes, children misbehaved back then too – though this incident wasn’t flagged on her college application). Some of my memories of Havens were being on the ‘boys’ softball team (way ahead of the times!) and being able to play many sports with my twin brother and his friends.  They always seemed to need a 9th for baseball and a 5th player for basketball.

Havens was followed by Piedmont Junior High and Piedmont High School where I penned respective columns called “The Jr. High Low Down” and “The High Low Down” for the original and only – back then! – Piedmont paper, “The Piedmonter.”  It was an attempt to keep everyone clued in as to what was going on in the lives of my classmates – a little like what this column hopes to do for those of us who grew up with typewriters but have finally given over to computers and cell phones.  My lady-reporter hero was Robin Orr, the social columnist for the Oakland Tribune (who later had a brief foray as Nancy Reagan’s press secretary). I was naïve enough to believe I was just as good a writer and had just as much information!

Back then: You could go to Piedmont High School even if you lived in Oakland which my mother did (Ashmount Avenue).  She graduated from Piedmont High School, as did I and our children.  Mom lived in Wildwood Gardens, where she raised us, until she passed at 101 years old.

Back then: In High School P.E. we had to play “Girl’s Basketball.” That meant you could only take three dribbles before you had to pass off the ball.  Any more than three and you would be whistled down! Those were pre-Title IX days.

Memorable teachers included Mrs. Reynolds, a very young teacher who taught Algebra, and for whom all the boys were gaga. Then there was Miss Drury in Jr. High, who scared the tar out of me and made us memorize “The Rhyme of The Ancient Mariner.”  That trauma did not affect my memory, however — I can still repeat a few verses!  I had some of the same teachers as my mother.  Our kids had some of the same teachers I had.  Low turnover in the teaching staff happened back then too! (Happy to report, however, that none of my Mom’s teachers taught my children.)

The inviting stairs outside Hamby’s Market and The Sweet Shop, (Piedmont Historical Society)

Many Piedmont landmarks have changed over the years. Where the BofA now lives, was Buzz Turman’s “Associated Gas” Station, the only place you went to filler’ up.  Mulberry’s was a Safeway Store back then, and across the street, in place of Wells Fargo, was Hamby’s Market and The Sweet Shop.

Both of those establishments were set high up off the street, with wide stairs that made for the perfect place to sit, meet friends and consume our goodies from the Sweet Shop. It was the place to hang out. Very few kids drove to school, but for special occasions, we would borrow our parents’ cars. (No texting – both hands on the wheel!) If you needed a pick up from your parents to get to a doctor’s appointment, the plan was always to meet at the “Blue Vase,” as we used to call the Exedra back then.

What a nice change to see The Exedra now also stands for this NEW news venture – STILL a place where we can meet. Now we can all channel our inner Robin Orr to share our Piedmont memories in PiedmontExedra.com! Ain’t progress grand?

2 thoughts on “Remember Piedmont When”