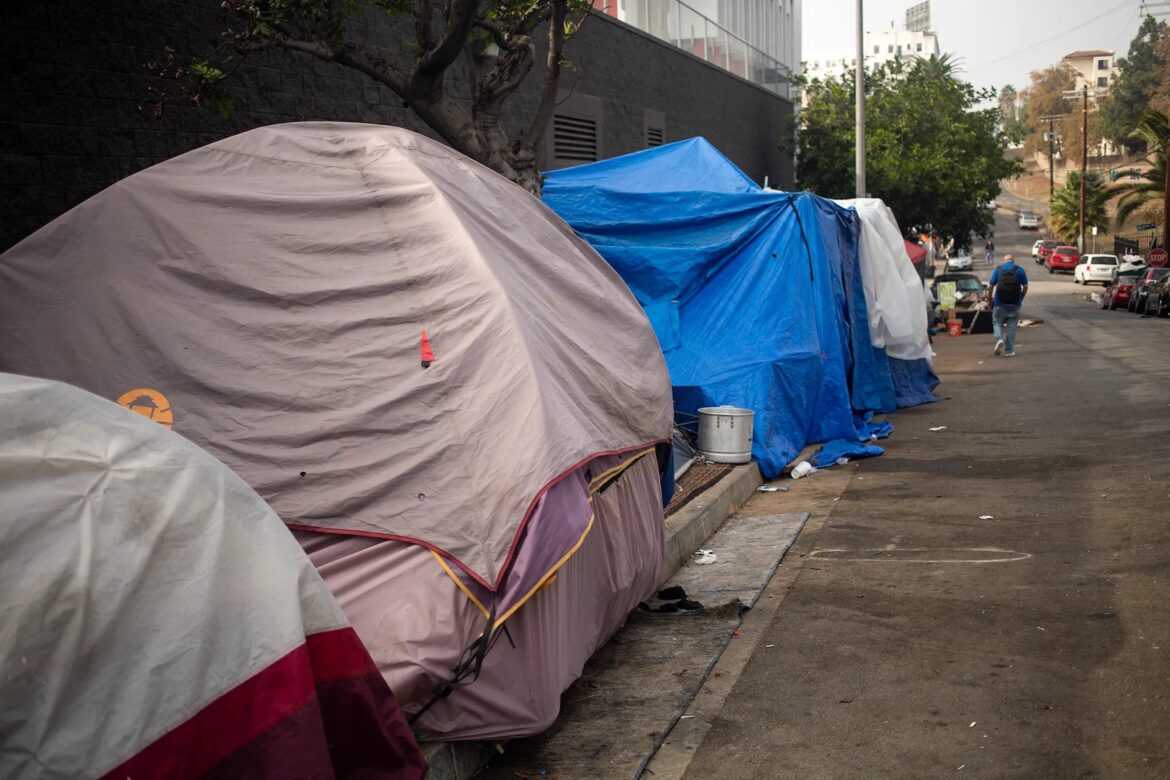 The numbers are in, and they’re grim.

California accounted for 30% of the country’s homeless population in 2022, despite making up less than 12% of the total population, according to federal data released Monday. It was also home to 50% of the country’s unsheltered people, or those living in places such as streets, cars or parks.

Based on a biennial point-in-time tally of people sleeping in shelters, cars and on the street — which California cities and counties conducted earlier this year for the first time since 2019 due to pandemic postponements — the U.S. Department of Housing and Community Development estimated that more than 172,000 Californians experienced homelessness this year. That represents an adjusted total of raw numbers first calculated in October by CalMatters housing reporter Manuela Tobias. Nationally, the homeless population ticked up by 0.3% to more than 582,000.

The federal government also awarded California first place in a number of other categories:

Also Monday, President Joe Biden’s administration unveiled a blueprint to slash homelessness nationwide 25% by 2025 — though details remain sparse. The administration plans to launch a program early next year to help certain cities address homeless encampments, but has so far declined to specify which ones, according to the Mercury News.

Meanwhile, Los Angeles Mayor Karen Bass is set today to launch a program to start moving the city’s estimated 40,000 homeless people into hotels and motels, the Associated Press reports. The plan appears to be modeled on Newsom’s Project Roomkey and Homekey, which the governor unveiled during the pandemic to help slow the spread of COVID among unhoused people and ultimately boost the state’s supply of affordable housing.

Bass, who declared a homelessness state of emergency on her first day in office last week, also issued a sweeping executive order Friday that aims to significantly speed up the development of 100% affordable housing by requiring city agencies to finish reviewing applications within 60 days — instead of the typical six to nine months.

Indeed, the challenges state lawmakers and local policymakers face in making a dent in California’s homelessness crisis are massive. In San Diego County, for example, almost 1,000 people became homeless in November while only about 600 found some type of housing; over the past year, 13 people became homeless there for every 10 who were housed, according to a new San Diego Regional Task Force on Homelessness report.

And a year and a half after the Biden administration distributed $1.1 billion in emergency housing vouchers to keep people in their homes during the pandemic, less than 50% of California’s are in use, largely because of bureaucratic hurdles in certain areas such as San Francisco, the Los Angeles Times reported Monday.

Even as some developers remain bullish on San Francisco, others are rethinking their investments amid tech layoffs, high interest rates, nation-leading construction costs and the city’s glacial approval process. The result, according to the San Francisco Chronicle: Numerous stalled development sites, which would have originally created hundreds of new housing units, are now attracting homeless encampments, illegal dumping and illicit drug use.

Note: This item was updated to clarify that California had the largest increase in the absolute number of people experiencing homelessness between 2020-22 and 2007-22, not the largest percentage increase.