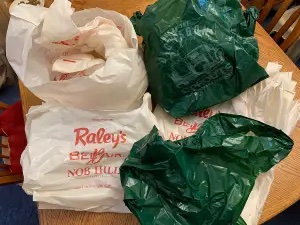 Berkeley has tightened its grip on the use of plastic bags with the City Council’s recent passage of an ordinance to close loopholes in state and county laws that are allowing millions of bags into landfills and the greater environment.

State and county laws ban flimsy plastic film carryout bags from a variety of stores while allowing thicker plastic bags. The Berkeley council, at its Nov. 15 meeting, banned the thicker plastic bags that are provided by supermarkets with less than $2 million in sales and among other places, convenience food and smaller retail stores not already regulated by the state. The new law goes into effect Jan. 1.

Berkeley Vice Mayor Kate Harrison, who authored the new ordinance, said while the thicker plastic bags are meant for reuse, they are being thrown away.

Berkeley will also start charging $0.10 for each bag that grocery store customers use to carry produce to the checkout stand. The charge applies to compostable and non-compostable versions.

Harrison’s office said the compostable versions are not composted but sent to a landfill.

Not only are plastic bags polluting waterways and contributing to urban blight, but much of the bag production occurs in low-income neighborhoods, Harrison said.

Exposure to emissions from plastic-producing plants “is linked to brain, liver, and kidney issues; cardiovascular and respiratory disease; miscarriages and birth defects; and childhood leukemia and cancer,” according to the nonprofit Environmental Health Sciences, which applies science to public discussion and public policy.

“It’s an environmental justice issue for me, too,” Harrison said.

Berkeley’s tighter grip on pre-checkout/produce bags applies to supermarkets, convenience food stores, foodmarts and other places greater than 2,500 square feet that sell food items. It also applies to carryout bags at retail stores not already regulated by the state.

California regulates retail stores with a pharmacy that have at least 10,000 square feet of retail space and pay sales or use taxes. Those stores are prohibited from providing flimsy plastic film carryout bags.

Berkeley’s new law will also apply to any event requiring a street permit and city and city-sponsored events. In addition, restaurant patrons must pay $0.10 for each plastic carryout bag they take for leftovers after a sit-down meal.

Restaurants and stores get to keep the $0.10 they charge for each produce and carryout bag, Harrison said.

The City Council allocated up to $350,000 to pay for additional staff needed to implement the new law and other regulations such as the Single Use Foodware and Litter Reduction Ordinance.