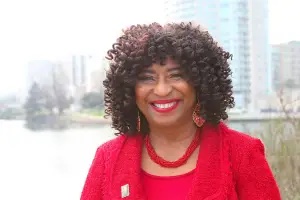 Alameda County voters have elected a new district attorney for the first time in 37 years.

Price won the race with roughly 53 percent of the vote and more than 227,000 raw votes. County prosecutor Terry Wiley finished with just under 47 percent.

County election officials confirmed the final results Friday in the race between Price and Wiley, who was endorsed by outgoing District Attorney Nancy O’Malley.

Price said in a statement Monday that Wiley contacted her Sunday to concede and pledge to support her as she transitions into the district attorney’s office.

“I am so grateful to my amazing campaign team, my campaign manager and our communications director who worked tirelessly to make sure voters understood what was really and truthfully at stake in this race. I am so thankful for every vote I received,” Price said. “We will use it as fuel to drive the change the county so desperately needs.”

Price ran as a reform-minded candidate after spending her legal career as a public defender and later a private civil rights attorney specializing in racial and sexual harassment cases.

“… I am so thankful for every vote I received. We will use it as fuel to drive the change the county so desperately needs.”

As part of her platform, Price promised not to prosecute juveniles as adults, to hold police accountable for misconduct and to release more data in an effort to increase the office’s transparency.

“Alameda County residents have spoken through the ballot box,” said Rocky Hunt, participatory defense coordinator of Communities United for Restorative Youth Justice and a member of the District Attorney Accountability Table, a coalition of local community-based organizations committed to ending mass incarceration, eliminating racism from the criminal legal system, and police accountability. “They are tired of business as usual and don’t want to continue seeing the same harmful, failed approaches that have destroyed so many Black and Brown lives. We congratulate Price on her victory and look forward to meeting with her soon to support a just transition with systems-impacted community members at the table.

Price is the first district attorney elected in Alameda County since 1985. O’Malley has served as the county’s top prosecutor since 2009, when she was appointed to the position after former DA Thomas Orloff retired in 2009.

“There are so many layers of changes needed and it will take time to turn the wheels of justice in the right direction, but I am confident that our ideas, plans and principles will be the guideposts in that journey of change,” Price said.

District attorney is a non-partisan position. Price is set to be sworn in on Jan. 3, 2023.