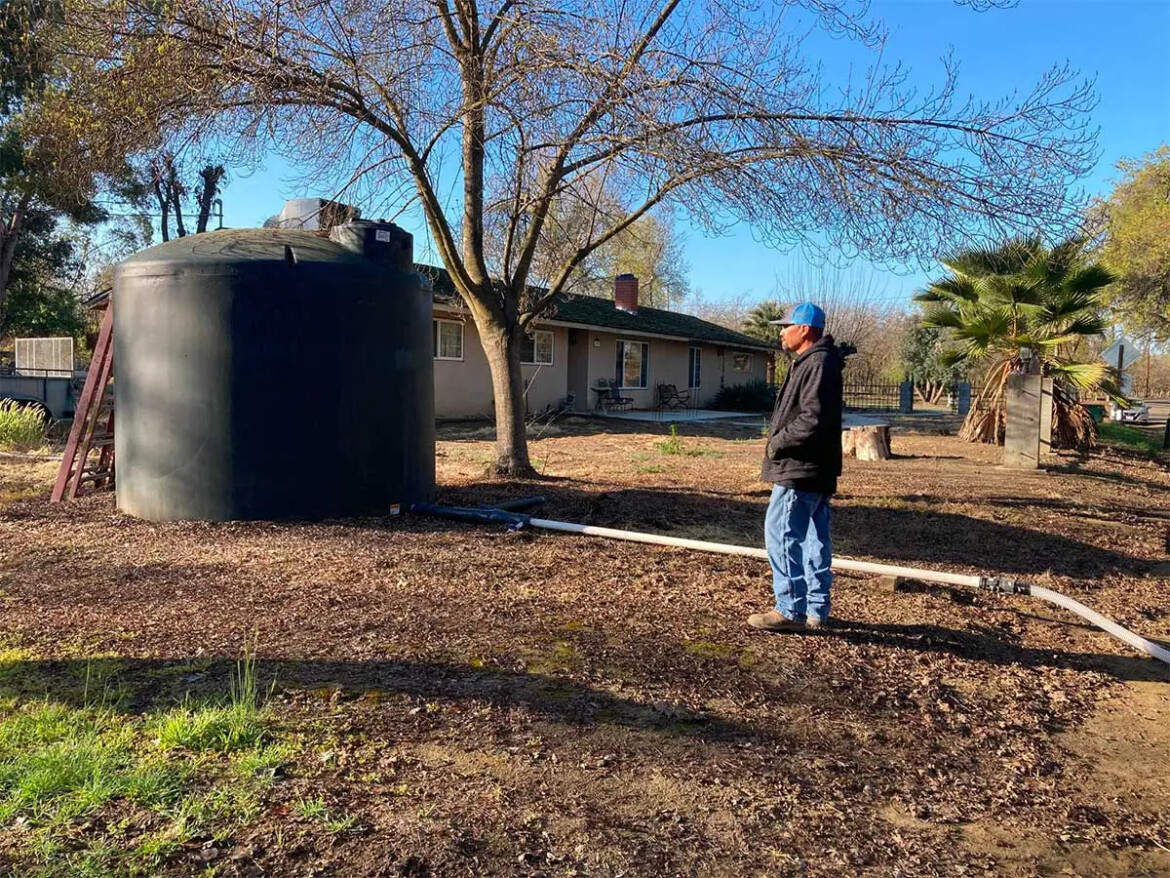 Potable water is pumped into a storage tank in the Central Valley in March 2022, where rural communities have been seeing dry and contaminated water wells as a result of an ongoing drought that experts say likely is entering its fourth year. While the state's water customers used nearly 7.5 percent less water in July than the same period in 2020, water managers say more work must be done to preserve water supplies. (Photo courtesy of California Water Resources Control Board/Facebook)

A group of state and local water system officials gathered at Google’s Mountain View campus recently to tout the benefits of conservation as California faces the likely prospect of a fourth consecutive year of drought.

Standing amid landscaping and office space designed to reduce potable water use by 60 percent compared to similar facilities, participants repeatedly emphasized the need for across-the-board water use reduction throughout the state.

“It’s the third straight year of a bad and worsening drought,” said California Natural Resources Agency Secretary Wade Crowfoot. “Our climatologists predict that as we move into the winter, we can expect another, fourth, dry year.”

Climate change is wreaking havoc on the state’s environment and its hydrologic cycles, Crowfoot said.

“What we’re learning is that those of us like California that have a Mediterranean climate are experiencing more and more extreme weather — the drys are getting drier and the wets are getting wetter,” he said.

He praised Bay Area residents for reducing water consumption, which the region did by more than 17 percent in July compared to the same month in 2020. Statewide, residents reduced water use by nearly 7.5 percent for July.

“My message today is thank you and keep it up,” Crowfoot said.

But Crowfoot said that conservation alone won’t protect the state from drought and climate change and noted that over the next 20 years, hotter and drier conditions will likely reduce the amount of water available in California by about 10 percent.

The state is working with local water agencies like the Santa Clara Valley Water District, which organized the Sept. 29 news conference, to diversify water supplies by expanding water recycling, recharging groundwater basins, reducing water waste and capturing and storing precipitation during the rainy season, he said.

“What we’re learning is that those of us like California that have a Mediterranean climate are experiencing more and more extreme weather — the drys are getting drier and the wets are getting wetter.”

Regulators are working to develop standards for efficient use of water, provide incentives for water re-use and to support rural communities that are most vulnerable to water supply shortages, said Sean Maguire, a member of the State Water Resources Control Board.

Maguire emphasized the need for collaboration by government, the private sector and individual residents to help the state endure its ongoing water woes.

“We all need water and we’re all in this together,” he said.

“Too much in California our water system is one-way. We just do not have enough re-use and recycling, and this is a part of that plan to get us there,” said state Sen. Josh Becker, D-Menlo Park.

Locally, the Valley Water board recently amended the district’s water waste ordinance to allow it to enforce state regulations that ban irrigation of decorative grass on commercial, industrial and institutional properties.

Valley Water also called for a mandatory 15 percent water use reduction in 2021 and offers rebates of up to $3,000 for residential customers and up to $100,000 for commercial and multi-family customers who want to switch to drought-tolerant landscaping.

The water agency also offers rebates up to $400 for people who install a “laundry-to-landscape” gray water system.