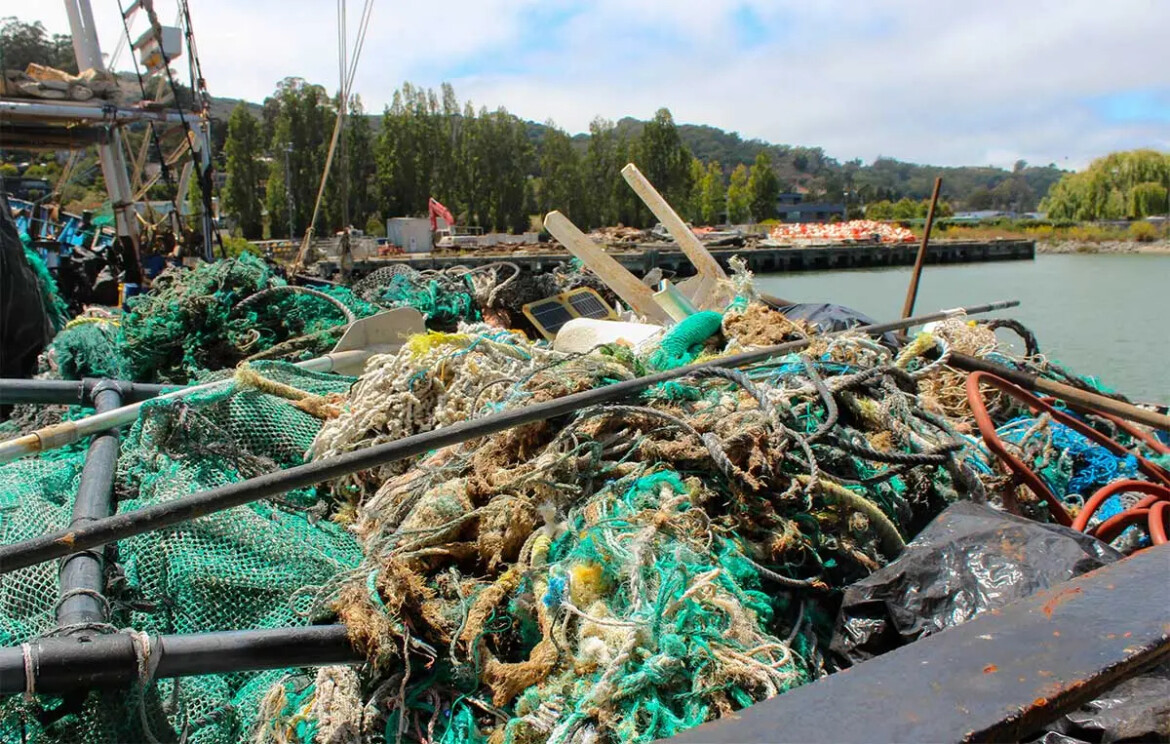 Piles of so-called "ghost nets" and other plastic debris recovered from the Pacific Ocean await unloading from the Kwai sailing cargo ship in Sausalito. The haul represents the work of an international crew from Ocean Voyages Institute that spent 45 days trawling for trash. (Photo by Olivia Wynkoop/Bay City News)

After a 45-day voyage around the Great Pacific Garbage Patch, a Sausalito-based sailing cargo ship is finally docked back home. The 96 tons of plastic debris the crew picked up along the way serves as their souvenir.

The journey was only part of the Bay Area nonprofit organization Ocean Voyages Institute’s mission to clean up the North Pacific Subtropical Convergence Zone, known for its fields of garbage that pose a significant threat to marine life.

Since 2009, the organization has clocked in over 692,000 pounds of plastic removed from the sea. They also hold the record for the largest open ocean cleanup in history after picking up 340,000 pounds of junk in 2020 alone.

The 130-foot sailing cargo ship Kwai, a vessel borrowed from the government of the Marshall Islands, helped the international crew cover over 4,600 nautical miles. On board were experienced mariners from Kiribati, Fiji, South Africa and beyond.

Though they certainly ran into random tidbits like children’s play mats or a kayak paddle, the crew’s main goal was to track down “ghost nets,” which are monstrously large entanglements of abandoned fishnets that flake off into microplastics and suffocate sea turtles, dolphins and other creatures.

Now back on shore, the team’s latest job is to unload 105 tarp bags worth of plastic debris, which will later turn into construction-grade building material thanks to a partnership with the sustainable manufacturing company ByFusion.

Captain Locky Maclean is not new to ocean conservation efforts. Before he came to the Ocean Voyages Institute in 2017, he captained high speed chases to stop poaching and illegal fishing operations in the act.

“It was very much sailing into harm’s way, like you’re battling it out with other vessels. The type of work I was doing before was much more direct action.”

But out in the gyre, he hardly ever ran into another vessel. Rather, he was busy grappling with nets and derelict fishing gear.

Maclean said it can be challenging to be continuously surrounded in cold water without the sight of land, operating in bad conditions. But out there, there’s seabirds, whales, and other creatures that greet them.

“It’s a rush, even if it might not seem like it. When you’ve got a couple hundred tons of steel underneath you, blasting along at high speeds of 11, 12 knots, with a lot of water rushing by you, it’s pretty fun,” Maclean said.

Without autopilot, Maclean and two other officers continuously switched off steering for 45 days straight.

“It’s a rush, even if it might not seem like it. When you’ve got a couple hundred tons of steel underneath you, blasting along at high speeds of 11, 12 knots, with a lot of water rushing by you, it’s pretty fun.”

Because the winds constantly shift the location of the nets, a network of volunteer mariners help the institute stick a GPS tracker on any blob of plastic junk that floats by them. The tracking devices serve both as a way to help the crew map out a plan of action and provide data on how plastic moves in the open ocean.

“That tracker may be out at sea for like two years, three years, but we get data from that. We get a position like every day, and it helps us map the gyro and see which way the nets are going. If we go and collect that tracker, we’re probably only going to find that one net, but it’s given us an idea of where all the other nets are going,” Maclean said.

Maclean added that GPS trackers and the other scientific methods the Oceans Voyages Institute used were certainly helpful, but not the only way the crew collected trash. Some success came from sailor’s intuition as well.

A trail of plastic bread crumbs

Tiny pieces of plastic almost served as a bread crumb trail for the crew: they would follow the path of fragments gradually increasing in size, and eventually run into a crate, or a laundry basket or a bowl. That’s when they knew they were on the right track to finding the next big monster net.

“Then the stuff just starts to build, and you just enter a kind of high-density area. You might see a big net every hour, and between those big nets, you might have four or five other little stops where you’re grabbing other things, like some other hard debris.”

Sometimes they would be sailing for two days straight without finding anything, and other days they would find a net so large that it would take three or four tries to pull it into the vessel.

“It’s hard to understand why it is that certain places there’s [garbage], but it all has to do with ocean currents and sea levels. In some places, the nets over the years just sink down there, and they hang out down there,” Maclean said.

MacLean said the crew sometimes ran into specific items repeatedly, like Crocs shoes, which came from a cargo ship that lost almost 2,000 containers worth of merchandise. Other times, they picked up consumer waste that land dwellers are all too familiar with — he had an entire box of plastic toothbrushes, for example.

“You think that when you’re that far from land that it’s a pristine ocean and everything, but the stuff you see out there is pretty mind boggling,” Maclean said.

Seeing the effects of single-use plastic firsthand made him feel more connected to his planet, he said. He said he even bought a bamboo toothbrush the other day.

“Convenience is short-lived; we can do without it. When you go out there and spend time in the gyre, you realize, wow, we have really messed this place up,” Maclean said.

The work on shore

This voyage couldn’t have happened without the coordinating efforts on shore as well, said Mary Crowley, founder of the Ocean Voyages Institute.

She has dedicated the last 14 years to cleaning up plastic in the ocean, and she finds that each voyage becomes slightly more innovative.

“A lot of people don’t understand that the ocean is intimately bound to the health of our planet,” Crowley said.

This time around, she received weather forecasts from a dozen different sources to ensure the crew stayed in calm waters. And to effectively spot plastic, she coordinated the trackers, worked with researchers from the University of Hawaii and fostered a partnership with National Oceanic and Atmospheric Administration satellites.

“It’s many sources putting everything together, figuring out what are going to be the best areas to go to so that we can efficiently fill up the hole,” Crowley said.

Crowley has a goal for herself to pick up 1 million pounds of plastic, but she won’t stop there.

She feels confident that the institute will reach that milestone shortly after they build two more sailing cargo ships for voyages in the future. She plans to launch a capital campaign for the project this fall.

“The more you successfully remove things from the ocean, the more committed you become to increasing the scale at which you’re working and really addressing the problem as it should be,” Crowley said.

The post Sea change: Crew returns home from trip that recovered 96 tons of plastic from the Pacific appeared first on Local News Matters.