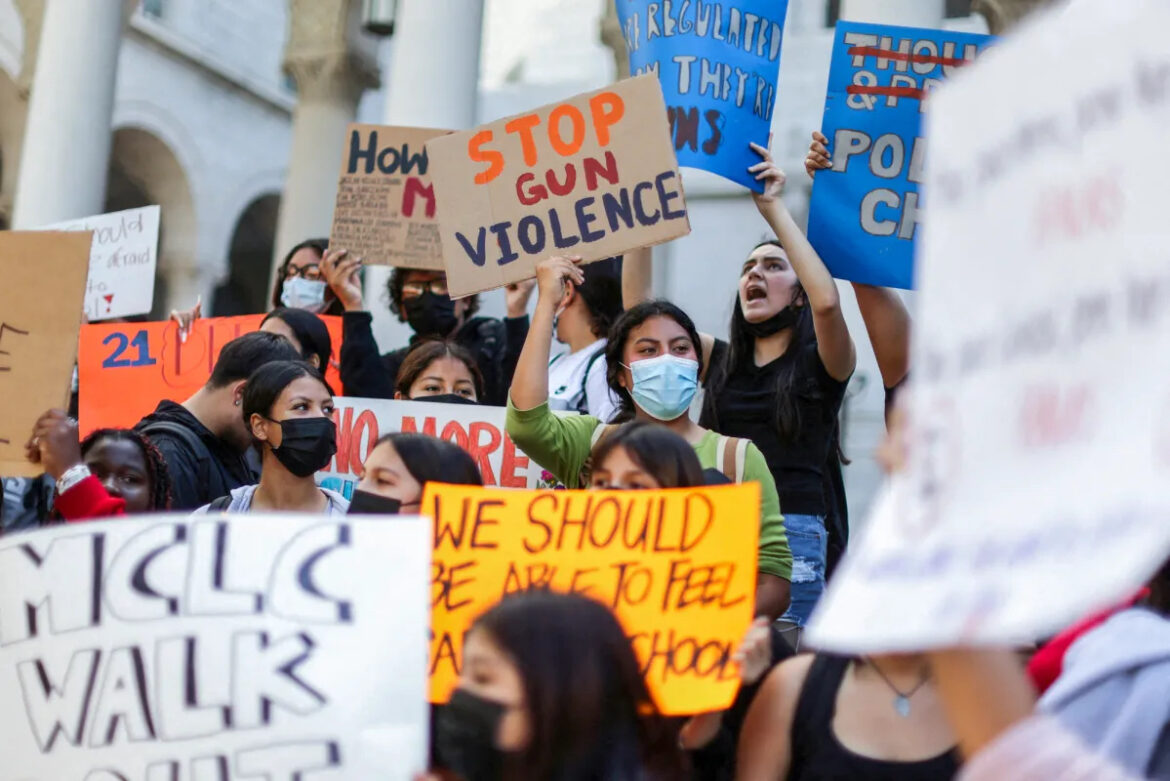 Students from Miguel Contreras Learning Center High School in Los Angeles demonstrate in front of City Hall after walking out of school to protest U.S. gun violence on May 31, 2022. Photo by Lucy Nicholson, Reuters

That was the question posed by the Sacramento Bee editorial board following a spate of Fourth of July shootings in California and across the country: In Highland Park, Illinois, a gunman killed at least six people and injured dozens more during an Independence Day parade. In Sacramento, one person was killed and four others shot outside a nightclub early Monday, three months after a gang shootout that left six dead and 12 injured. And in South Los Angeles, a street takeover ended in a fatal shooting early Monday.

The shootings came just a few days after Gov. Gavin Newsom signed into law a pair of bills that he said would help protect Californians, especially kids, from rising rates of gun violence: One bill tightens restrictions on so-called “ghost guns” — those intentionally made untraceable — while another would hold companies liable for marketing certain firearms to minors.

Interestingly, guns are not among the hot-button topics Newsom mentions in a 30-second ad from his reelection campaign that began airing Monday not in California, but on Fox News stations across Florida.

The ad appears to be Newsom’s latest attempt to elevate his national profile amid intensifying culture wars — and his latest attempt to draw a stark contrast with Ron DeSantis, the Republican governor of Florida said to be contemplating a 2024 presidential bid.

Due to what aides said was a prior family commitment, Newsom didn’t participate in a virtual meeting President Joe Biden held Friday with a handful of Democratic governors to discuss the recent U.S. Supreme Court ruling overturning the federal constitutional right to an abortion.

Newsom took action on a handful of key items before his departure. Let’s dive in:

California has administered 77,630,160 vaccine doses, and 75.7% of eligible Californians are fully vaccinated.

California voters will be asked to weigh in on seven statewide ballot measures in November, the fewest measures in an election year since 1916. (In November 2020, for example, voters determined the fate of 12 statewide ballot measures.) On Friday, Secretary of State Shirley Weber assigned numbers to the initiatives, which CalMatters breaks down in this comprehensive explainer. Here’s a quick overview:

Many other measures failed to qualify for the November ballot by last week’s deadline, including a high-profile initiative to boost California’s minimum wage to $18 per hour by 2025, CalMatters’ Jeanne Kuang reports. But voters will likely consider that measure in 2024 — along with one to raise income taxes on Californians earning more than $5 million to pay for pandemic detection and prevention programs and another to overturn a state labor law recently limited by the nation’s highest court.

In politics — as in life — it’s impossible to please everyone. If you don’t believe me, consider California’s budget for the fiscal year that began Friday: Despite a record $308 billion spending plan — buoyed by a nearly $100 billion surplus — some lawmakers, advocates and residents have accused the state of falling short in key areas, including:

How might California most effectively help residents struggling with substance use disorders? That question was reignited last week, when state lawmakers advanced a controversial bill that would allow Los Angeles, San Francisco and Oakland to offer “supervised injection sites” where opioid users could use drugs in the presence of medical professionals in a bid to limit potential overdoses. And this fall, California is set to launch a pilot program that will reimburse participating health care providers in two dozen counties for gift cards of as much as $599 to incentivize people to stop using meth and other drugs, the Los Angeles Times reports.

The new approaches come as the number of Californians participating in drug courts — which give offenders a chance to avoid criminal conviction by entering a court-overseen treatment program — has declined precipitously. Research has shown that in the four years following the 2014 passage of Prop. 47 — which slashed sentences for certain theft and drug offenses — statewide participation in drug courts fell 67%, CalMatters’ Nigel Duara reports.

In other courthouse news: The California Judicial Council, which governs the state’s court system, voted to end remaining COVID emergency rules as of last Friday — a move that could help ease a massive backlog of cases accumulated during the pandemic.