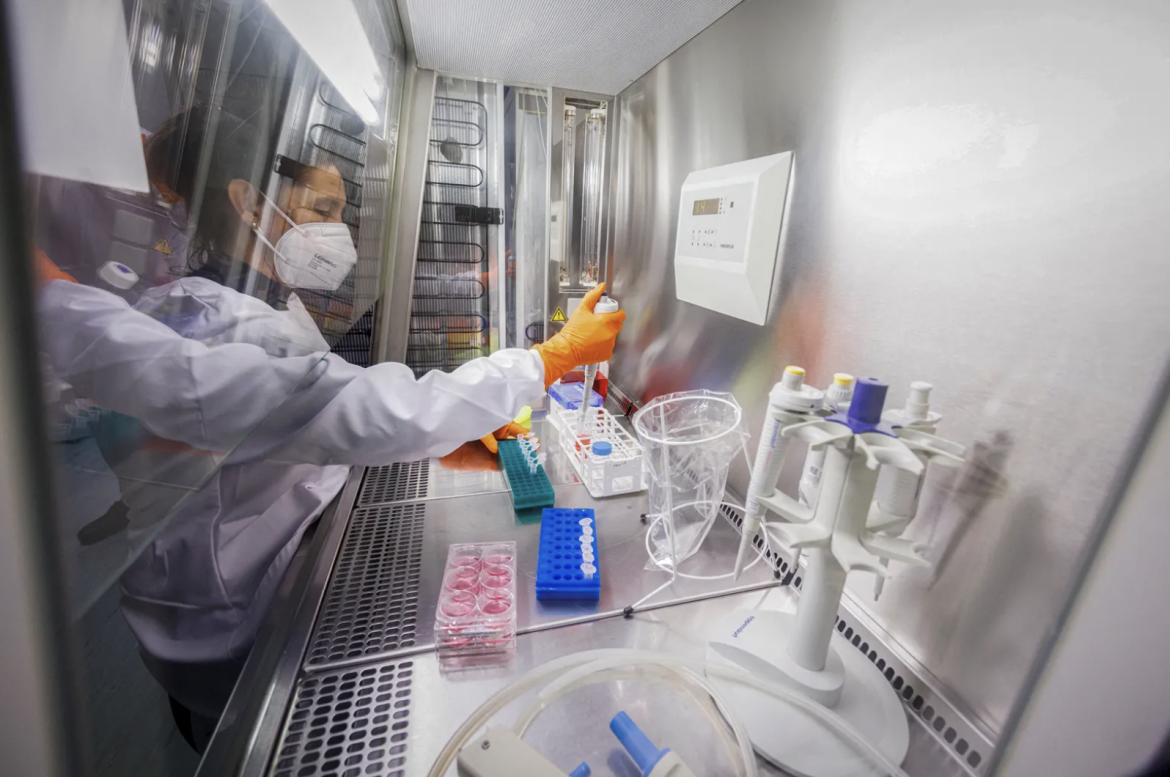 An employee works on a monkeypox vaccine at the laboratory of biotechnology company Bavarian Nordic in Germany, on May 24, 2022. REUTERS/Lukas Barth

California reported its first case of suspected monkeypox today in Sacramento County. Officials were alerted of the possible case three days prior by a medical provider.

Sacramento County Public Health Officer Dr. Olivia Kasirye said the individual is not hospitalized and is in isolation.

“There is minimal risk to the general public,” Kasirye said.

While the health advisories and Sacramento County Division of Public Health’s press conference today are reminiscent of the early days of the COVID-19 pandemic, experts say monkeypox is less transmissible than coronavirus and the disease tends to be less severe. It’s not going to be the next COVID, they say.

Health experts say people should be cognizant, but not worried at this point.

Initial test results from the county public health laboratory indicated the individual was infected with a virus in the same family as monkeypox. Specimens were sent to the Centers for Disease Control and Prevention and the state health department Monday for confirmation of a monkeypox diagnosis. Kasirye said there is no estimation for when the CDC will be able to confirm results, but based on symptoms and preliminary testing “confirmation is likely.”

Sacramento County health officials are working with the CDC and California Department of Public Health to identify close contacts of the individual with the suspected case and those who may have been on the same flight from Europe. Kasirye did not disclose how many people may be considered close contacts.

State testing capacity is limited given the rarity of the disease, but officials are working on increasing capabilities and are prepared to receive samples, according to the department directive.

Although cases in the U.S., including California’s, have been mild, Kasirye said it is still important to limit transmission.

“The concern for us in public health is always that there might be some people that end up with severe disease and so we want to make sure that we prevent any additional cases,” she said.

Here’s what you need to know about monkeypox:

What are the symptoms?

Symptoms for monkeypox disease usually include fever, muscle aches, swollen lymph nodes and often a rash. In some recent cases symptoms included lesions in the genital area, which may be confused with other more common infections, like syphilis or herpes, according to the CDC.

“These rash lesions can appear in parts of the body that can cause serious complications,” said Jennifer McQuiston, deputy director of the CDC’s division of high consequence pathogens and pathology, during a Monday press call.

“So if the rash lesion occurs in the eye, for example, that person may have their vision endangered. If the lymph nodes become so swollen that breathing is compromised, that’s a concern.” But those are rare, McQuiston said.

The incubation time is anywhere from five to 21 days, and a person is considered infectious when symptoms start until the skin lesions have fully healed.

How is it transmitted?

Monkeypox is transmitted through close physical contact, usually with bodily fluids, such as saliva, or through respiratory droplets during prolonged face-to-face contact.

“It’s not a situation where if you’re passing someone in the grocery store, they’re going to be at risk for monkeypox,” McQuiston said. People most at risk are those with intimate contact with an infected person, as well as family members or health care workers caring for someone with an active infection.

Is there treatment for monkeypox?

There is no specific treatment for monkeypox.  Most infections are mild and get better on their own within two to four weeks, according to public health experts.

Because of its similarity to smallpox, smallpox vaccination may also protect people from monkeypox infections. Routine smallpox vaccination stopped after the disease was declared eradicated in the 1980s, so smallpox vaccines aren’t generally available to the public. The CDC has said that in case of a monkeypox outbreak in the U.S., it would release guidance on who should get vaccinated. “We’re working now to develop recommendations to ensure that the vaccine supplies that we have are available to those who need it,” McQuiston said on Monday.

Where did it originate and why is it spreading now?

The first case of monkeypox in humans was first recorded in the 1970s, in the Democratic Republic of the Congo, where most infections are today, according to the Centers for Disease Control and Prevention. The monkeypox is endemic in West and Central Africa and rare in other parts of the world, which is why the recent outbreaks in countries outside of Africa are causing alarm. At least 12 other countries, mostly in Europe, have confirmed monkeypox infections as of today.

The cluster of infections in European countries have been linked to sexual activity at two large party events in Spain and Belgium.

How likely is it to be the next COVID-19?

“It’s absolutely 100% not going to be the next COVID-19,” said Dr. George Rutherford, an epidemiologist at the University of California, San Francisco. “It’s a-difficult-to-transmit disease and it’s not a particularly severe disease.”

What makes COVID-19 so dangerous is that it can spread easily through the air. This isn’t the case with monkeypox. The coronavirus was also novel; monkeypox isn’t.

In 2003, six U.S. states — not including California — reported 71 monkeypox cases to the CDC. In that instance, most people were exposed to infected prairie dogs. Two children were hospitalized, but recovered.