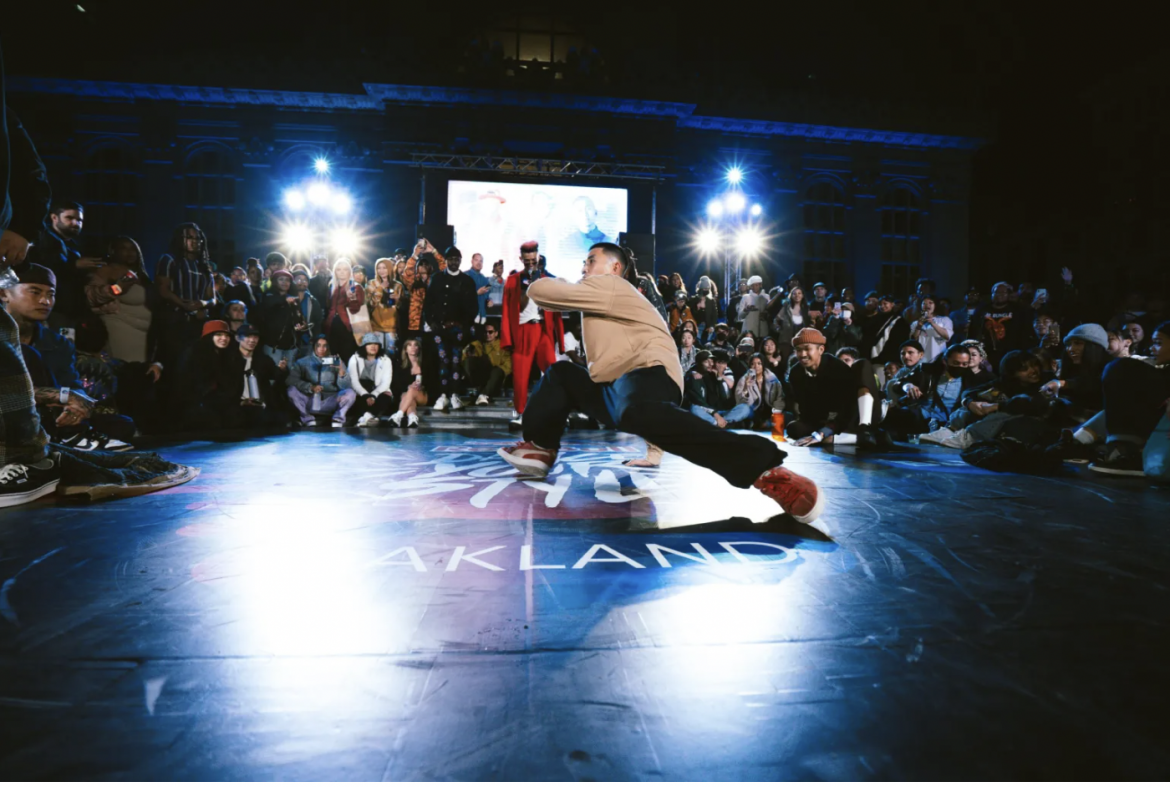 Son Lam competes during the Red Bull Dance Your Style qualifier in front of City Hall in Oakland on May 6. (Photo courtesy Neil Yuzon)

Vietnam-born dancer and San Francisco State student Son Lam believes in cycles, and the power of attraction. It was 2008 when the first season of reality competition show “America’s Best Dance Crew” premiered and introduced Lam to the Jabbawockeez, a now-globally famous dance crew known for their anonymous white masks and meticulous popping style. For Lam, who’d studied contemporary dance styles, it was something like an epiphany.

“I was hooked. I basically mimicked them, like, ‘How I can be so raw but yet so gentlemanly, classy and so illusional?’” Lam says. He had dabbled in jazz, modern and ballroom before, but “popping is my first choice. First, it was the urge of learning the cool moves and being like them, but then I started to dig deeper into the history. San Francisco and the Bay Area is the birthplace for the style I pursued.”

He soon devoted himself to studying the moves of hip-hop dancers from YouTube tutorials for hours a day after school in his native Vietnam. It feels like a full circle that on May 6, he won Red Bull’s Dance Your Style regional qualifier competition in Oakland with a fusion of moves that would make the Jabbawockeez, who themselves credit their unique aesthetics and style to the Bay, very proud. While he may not have known at the time, Lam was emulating the moves first innovated by the Bay Area’s Boogaloo-Roboting-Strutting dance crews in San Francisco and Oakland in the 1960s and ’70s.

Paying homage to the Bay helped Lam win the third season of “So You Think You Can Dance: Vietnam” in 2014 at just 19, and he moved to LA in 2017 to elevate his career and pursue a bachelor’s degree in dance. But to get closer to those first heroes, he transferred from his community college to San Francisco State University for his final year; his graduation will take place May 27, just days after the next round of the Red Bull qualifier in New Orleans this Friday through Sunday. Should he win, he’ll represent the entire U.S. in the Dance Your Style world final in Johannesburg, South Africa, on Dec. 10.

This isn’t the first year of Red Bull Dance Your Style, which has hosted dance battle competitions across the U.S. and the globe since 2018, but 2022 marks the first time a qualifier was held in Oakland, itself a cultural and dance nucleus. Like other Red Bull regional competitions held this year in Washington, D.C., Atlanta, Chicago, Boston and Tampa, the event comprised 16 one-on-one dance battles, held at Frank H. Ogawa Plaza downtown, with the crowd serving as judges.

In the last half a century, communities in Oakland have led the Bay Area’s artistic innovations, from the mid-century Boogaloo, to hyphy-era turfing, to the TikTok-famous Smeeze, invented by Oakland native and member of the Turf Feinz crew, Chonkie. Lam says the dance community he’s found here is incomparable.

“I have so many friends that are willing to stand up for me, to protect me if something happens; it’s that energy that allows you to express something pure, something that’s inside you,” Lam says. Baydestrians aren’t sore losers either, so upon Lam receiving his win, he says, “They came up to me [and said], ‘Welcome to the Bay Area; you are part of the Bay Area.’ So it’s an honor to dance here, just to exist.”

Local turf dance leader and TURFinc founder Johnny Lopez, better known as Johnny5, co-hosted the May 6 event with actor, dancer and choreographer Comfort Fedoke, who appeared on the fourth season of the American “So You Think You Can Dance.”

Lopez had worked with Red Bull on prior events and even played a part in approving Oakland as a location for the Dance Your Style qualifier, but hadn’t heard of Lam before his victory. He agrees that Lam deserved to win. He’s also stoked for his fellow dancers who competed, and what the exposure means for a homegrown-style ready to spread across the globe.

“It’s time to put on the culture,” he says. “This definitely made noise in the dance world, and we just got to keep the momentum going.”

Lopez was born in Oakland in 1989, and raised by parents who came from Mexico; his father picked grapes in Fresno before moving to the Bay Area and meeting his mother. He found turfing at 13 as many Bay kids do, by going to sideshows.

That quickly led to a spot in the Turf Feinz crew, but he has since branched out to start his own crew, and later founded the organization TURFinc in 2012. In addition to honing their craft, the members of TURFinc also host events, perform and provide classes to kids around the Bay who may need an outlet.

“I think all the stuff that I’ve seen growing up, like, a young person should not be seeing all that we see in Oakland,” Lopez says. “Dancing changed my world. It definitely saved me from being in the streets.”

July 9 will mark the 10 year anniversary of TURFinc, and Lopez plans to go all out with an open style “King of TURFinc” competition. He’s also setting his sights beyond the Bay.

“I want to start bringing turf dancing and other styles with me from the Bay and start going to these different countries and cities, sharing our culture and educating, like, the new generations,” he says. “I think I’m gonna go into the nonprofit world. I think I’m ready for that.”

For Lam, he’s keeping busy training and prepping for the mental game of the upcoming national competition in New Orleans this weekend. Victory would be nice, but it’s not why he started scouring the internet for hip-hop videos or why he crossed the planet.

“I’m gonna dance exactly how I dance,” Lam says. “And if I touch someone, that’s beautiful, and if they vote for me, that’s great. If not, I’ll make sure I have a great time. I view the world through movements and art; that’s my role in the world, and I’m cool with that.”

After graduation, Lam will be teaching a popping dance intensive in LA and going back to Vietnam, where he hopes to eventually open a studio for the next generation’s dancers. It hasn’t been easy, and likely won’t ever be, but Lam trusts the process.

“In your journey of leveling up yourself as a human or with your craft, it can feel like a lonely journey. As long as you have your circle, and you have the right people, you balance it out. It pays off in the end.” After all, he says, “in art, there’s no actual winner.