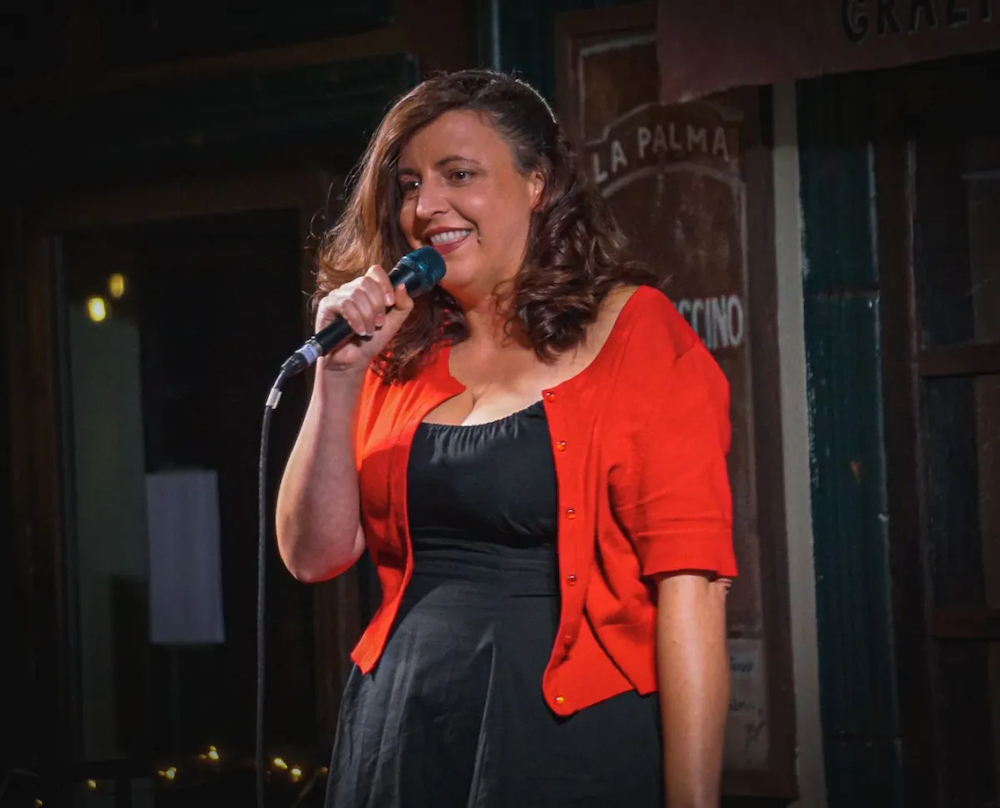 You may have noticed — in fact, it’s impossible not to — that San Francisco is a funny place. So is Oakland, so is Berkeley, so is any city, town or municipality that claims the regional whimsy that is the Bay. It can find you at classic, historic venues like the Punch Line, or your local dive bar’s Tuesday open mic; even Zoom aphasia can’t obstruct the giggles.

By now, you probably know the names of the comedic greats who once called this hub home, from Mort Sahl to Robin Williams to Margaret Cho to Ali Wong and W. Kamau Bell. You know that the stand-up art form, something generally associated with 1950s New York, can be traced back to San Francisco and the Gold Rush. Or that Charlie Chaplin was here working out the kinks, quite abrasively, for what would become some of his most acclaimed films of the 1910s.

Or maybe you don’t.

Nina Ghiselli (G for the stage) and OJ Patterson are the two Bay Area natives and comedians seasoned by their hometowns ready to fix that with a spirited chronology of “the scene” of Bay Area comedy, spanning decades, characters, venues and, above all, the superior taste in humor that living here creates. Having grown up in Alameda and “all over” respectively and worked as comics for years (though Patterson now calls himself retired and lives in LA), they realized no one else was going to write the book about their world.

What was floated as a pandemic project fertilized across months of archival research, interviews and lived experience (oh, and writing) into “Bay Area Stand-Up Comedy: A Humorous History,” which, G writes in her introduction, is “a book that broadly explores Bay Area comedy in words and pictures.” And broadly speaking, San Francisco is a vanguard.

“What San Francisco has always done is been that place where comics can develop their voice away from Hollywood away from New York to find out who they really, really are,” G says. “It’s the canary in the coal mine in a lot of ways [in] that if it happens in the world, it may happen with us first, and we may have a firsthand account of that and can then act on that within comedy.”

In the case of stand-up comedy (remember, in the Bay Area, there are many firsts), San Francisco was a bawdy Western outpost full of audiences looking for entertainment and unburdened by the anxiety of the Civil War. It was ideal then, for Artemus Ward (real name Charles Farrar Browne), a New York writer and satirical stage performer, to cast his comments and quips on fresh ears in the early 1860s to see what stuck. He and his successors were paid in gold nuggets. And that’s just Chapter 1.

The meat of the book, however, comes with the 20th century and the intersection of comedy with other social and artistic movements led by the Beats, jazz musicians and the first legal topless dancers in the U.S., all slinking around North Beach. There, big comedy names like Phyllis Diller, Steve Martin and Lenny Bruce mingled with hometown heroes like Larry Bubbles Brown and Mort Sahl, who died last year. As the scene bloomed into its own ecosystem in the ’80s — G’s personal area of expertise — venues were abundant, and audiences were gluttonous.

“Something about the Bay kind of encourages a hustle culture; I can connect Too $hort selling tapes out of the back of his car with a writer for Vanity Fair changing his name to Artemus Ward and figuring out how to perform at mining colonies,” Patterson says. “I think the Bay Area is 10 years [ahead] culturally. The reality is, like, people say who they are and mean who they are here in a way that that slowly reflects over time across the country.”

Comedy, even today, can still look pretty white and male, and San Francisco wasn’t as inclusive as nostalgia would like us to think. So with the “Comedy Renaissance” of the ’80s and early ’90s came a time for marginalized comedians, like women, queer and Black comics, to assert their own niches and voices in places like the short-lived Valencia Rose. Amongst the Robin Williamses and Dana Carveys and Don Novellos were the Richard Pryors, Whoopi Goldbergs and Marga Gomezes.

They also chart how, in the chapter “The New Millennium,” oversaturation and media innovations (hello, internet) altered the avenues for people to perform and consume comedy. Many of the clubs and venues renowned a generation ago, and preserved through archival photos and posters, have since shuttered or gone corporate.

The book’s 180-odd pages belies the true breadth of the city’s comedy history; while the book is a kind of first of its kind, both G and Patterson hope it inspires new works that honor all the people who bombed and killed before.

G hopes in particular, as a disabled comic, that more attention and resources will be allocated to the work her community has contributed to what we find funny. There’s also, given the circumstances of the book’s production, a chapter dedicated to how the pandemic has made comedic parameters more malleable again, and the potential that has yet to be realized. One book can only do so much.

“There’s this thing about comics, that [they] just kind of think they spring out of themselves. And it’s like, ‘No, you have a whole legacy of people who have brought you to this point,’” G says. “The No. 1 way of preserving it is talking about it. This is the first time that we’ve had a book on San Francisco comedy, which is silly to me. And hopefully, there will be more to come from somebody else, because I don’t want to write any more books.”