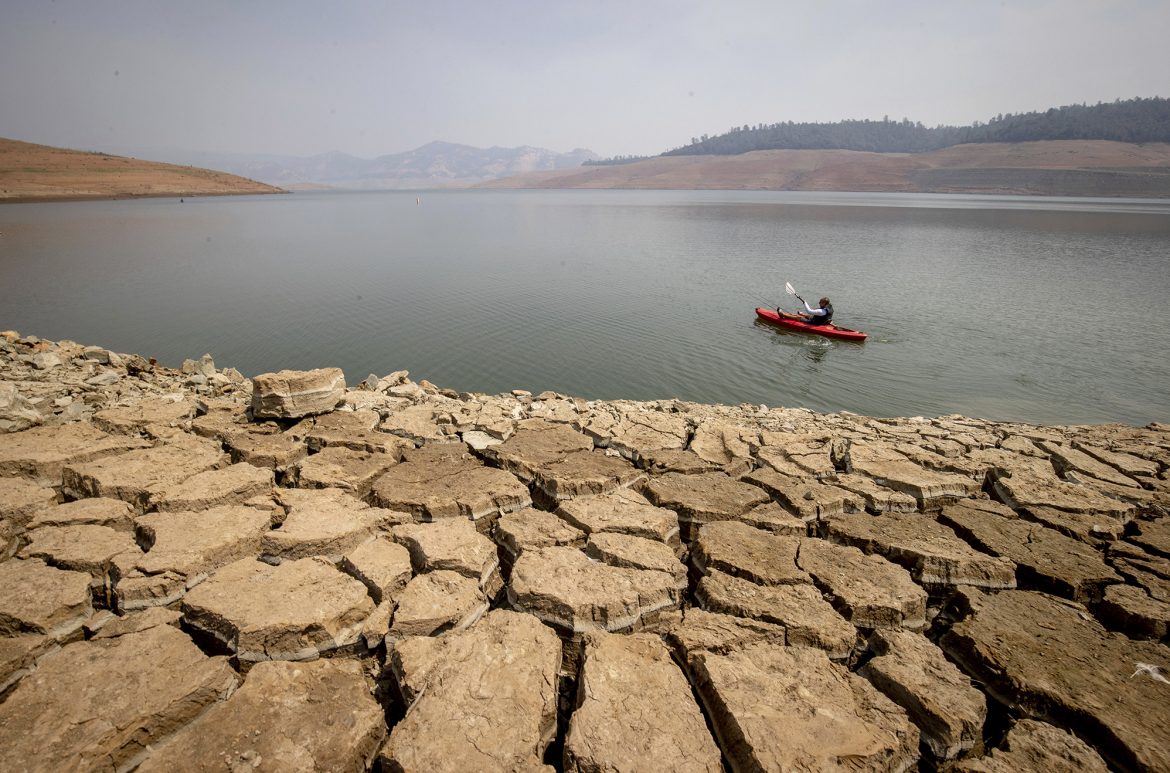 A kayaker fishes in Lake Oroville as water levels remained low due to continuing drought conditions in California on Aug. 22, 2021.

CalMatters is dedicated to explaining how state government impacts our lives. Your support helps us produce journalism that makes a difference. Donate now.

California is going in the wrong direction when it comes to addressing the state’s persistent drought.

Urban residents used 2.6% more water in January 2022 than they did in January 2020, state water officials reported Tuesday — despite Gov. Gavin Newsom last year urging all Californians to voluntarily cut their water use by 15% and declaring a statewide drought emergency.

And, with the state recording its driest January and February in history amid a dwindling Sierra Nevada snowpack — which provides California with about a third of its water supply — some experts say it’s past time for Newsom to issue mandatory statewide water restrictions, CalMatters’ Rachel Becker reports.

Newsom administration officials declined to say Tuesday if the governor is considering mandatory cutbacks — though he suggested last year such measures were possible if the drought worsened.

Instead, the governor’s office outlined plans Sunday night to double down on public campaigns to educate Californians about water conservation efforts. The administration also announced a $22.5 million drought emergency package that allocates:

“Climate change has fundamentally altered the state’s hydrologic cycle,” Newsom’s office said in a statement on Tuesday — the same day that California Environmental Voters, an influential advocacy group, issued a scorecard giving California a “D” for its 2021 response to the climate crisis. Newsom got an 82% — his lowest mark yet.

California has administered 72,261,187 vaccine doses, and 74.2% of eligible Californians are fully vaccinated.

1. COVID state of emergency to stay

From CalMatters political reporter Sameea Kamal: A Republican-led proposal to end California’s COVID state of emergency — and terminate Newsom’s pandemic emergency powers — failed to pass a key Senate committee Tuesday, though the bill’s author, state Sen. Melissa Melendez of Murrieta, can bring it back later for another vote. But Tuesday’s party-line vote — with 4 Republicans supporting the measure and 8 Democrats opposing it — suggests it doesn’t stand much of a chance of clearing the supermajority-Democratic Legislature. It’s the second big loss for the GOP in as many days: On Monday, the Assembly declined to consider a Republican proposal to suspend California’s gas excise tax for six months.

Another bill that failed to advance Tuesday: A Democratic-led proposal to crack down on crime by reauthorizing district attorneys to prosecute organized retail theft and similar crimes that often cross county lines. But the bill’s author, Assemblymember Jacqui Irwin of Thousand Oaks, can bring it back later for another vote.

California has received an additional $136 million in federal pandemic rent relief funds to help tenants stay housed and landlords paid, the state Department of Housing and Community Development announced Tuesday. The good news comes ahead of a fast-approaching deadline: Under state law, landlords will be able to evict tenants who failed to pay rent by April 1. And although the state says it’s distributed more than $2.36 billion to assist more than 206,000 low-income households so far, a study released earlier this month found that only 16% of the Californians who applied for rent relief from the state had received the money.

In other Tuesday California housing news:

Pushback to California’s strict worker protection laws is going all the way to the U.S. Supreme Court. Later this month, the nation’s highest court is slated to hear a case that could overturn a California law allowing workers to sue their employers for violating state labor regulations, such as not paying minimum wage or granting required meal and rest breaks, the San Francisco Chronicle reports. The law, known as PAGA — the Private Attorneys General Act — was California’s way of blocking companies from requiring workers to settle such disputes out of court and in private arbitration. But many businesses oppose PAGA and say it violates federal law. At stake: lots of money and workers’ ability to hold employers accountable.

That isn’t the only California labor law making headlines: The airline industry wants the U.S. Supreme Court to strike down a lower court ruling that found California-based flight crews are subject to state laws giving them more meal and rest breaks than guaranteed under federal law, the Associated Press reports. According to airline groups, complying with California’s law could cost the industry between $3.5 billion and $8.5 billion annually.

California gas prices reach $5.75 a gallon but falling oil prices could mean cheaper gas in the weeks ahead. // Mercury News

Instagram, TikTok could get sued for addicting kids under California proposal. // Politico

Inside the fight for a new abortion clinic in one California city. // Reuters

One Bay Area county says it could end homelessness this year. Can its approach spread? // San Francisco Chronicle

Will the real Modesto postmaster please stand up? // Modesto Bee

Contra Costa Sheriff continues to stand by convicted deputy, even as audits are requested. // Mercury News

Californians deserve to know their houses are going to burn. // The Atlantic