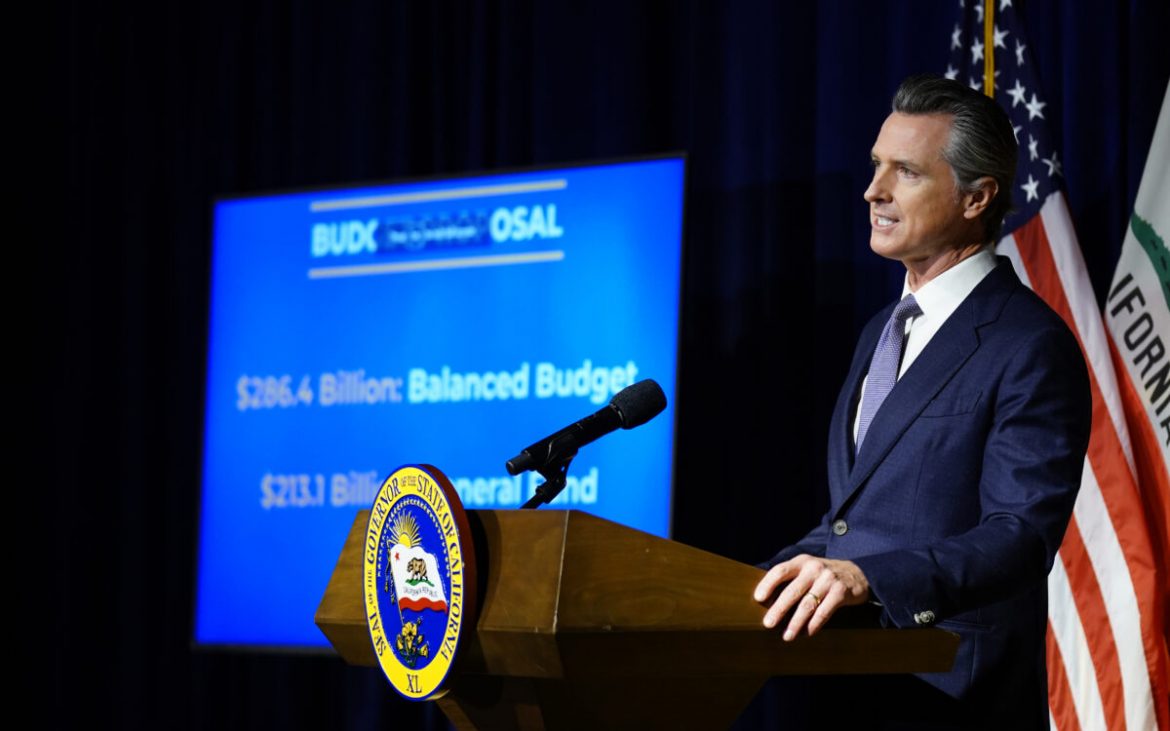 Funding for schools and community colleges will rise to more than $100 billion for the first time under Gov. Gavin Newsom’s proposed budget for next year, as state revenues continue to surge amid a pandemic that is filling hospitals and continuing to throw businesses and Californians off-kilter.

“I don’t need to tell you the stress and anxiety our kids have been under over the last few years, particularly as it relates to Covid,” Newsom said Monday in a news conference announcing his proposed 2022-23 state budget. “This is serious, and we’re taking it seriously.”

K-12 schools and community colleges will have $24 billion more to spend next year, with two-thirds coming from a one-time surplus from 2021-22 revenues that continue to flow beyond optimistic assumptions built into the budget passed in June. An additional $8.2 billion will be ongoing funding through Proposition 98, the formula that determines the portion of the general fund committed to transitional kindergarten through community colleges. That portion is about 40%.

Per-student funding under Proposition 98 would be $15,261. About 89% of Proposition 98 customarily goes to TK-12, with the rest for community colleges. Including community colleges, Newsom proposes $39.6 billion for higher education, with promises to increase the University of California and the California State University funding by 5% annually for five years, if they meet certain conditions. Go here to read more.

Last year, Newsom and the Legislature dramatically expanded TK-12 programs for what they called a once-in-a-generation budget. Newsom proposes to speed up funding for several of those programs.

The Expanded Learning Opportunity Program, which will provide a nine-hour school day with before-school and after-school programs for low-income children through sixth grade, would get an additional $3.4 billion, plus the $1 billion set aside last year. In tandem with this, Newsom would provide the biggest appropriation in decades for arts and music programs: $937 million.

“Your kids deserve what every fancy family gets, which is those extra supports,” Newsom said. “You deserve that, especially with all the social-emotional damage that’s been done because of this pandemic.”

“We’ve heard all of the legendary studies about determining populations in corrections based on third-grade reading levels. As perverse as that is, there is some truth to those studies,” Newsom said.

The budget is based on revenue estimates through December, and Newsom implied that those estimates may keep growing by the time he issues his budget revision in May. That also may make negotiating easier with the Legislature over its priorities (go here for the Assembly’s budget blueprint and here for the Senate’s.)

“It is undeniable that the governor’s proposed budget has proposed many important investments and policy changes by utilizing a historic level of anticipated state revenues,” said Edgar Zazueta, senior director of policy and government relations for the Association of California School Administrators.  “The biggest question for education leaders around the state will be how they will balance effective implementation of numerous programs at a time where our schools are confronted with such persistent challenges. Confronting our staffing shortages and finding more bodies to ramp up many of these new programs will undoubtedly be at the center of our discussions with legislators.”

Other highlights of the proposed budget include:

Heather Hough, executive director of the nonpartisan education research center PACE, said, “Like last year, there are really important investments — teacher workforce, special education, career pathways. But I remain concerned about districts’ capacity to make the best use of the money amid crippling staff shortages and declining enrollment. Districts need help with accelerated learning, to know if money has been effectively used and how to revise plans if it hasn’t. The state needs to invest in a system of support; it remains underfunded.”

E. Toby Boyd, president of the California Teachers Assocaition, praised the budget without reservation. “The pandemic has made clear that living in the state with the fifth largest economy in the world doesn’t mean all students in our schools and communities have the resources and services they need to succeed,” he said. “We commend the governor’s proposals for investing in academic programs, particularly the continued $3 billion for community schools which will allow parents, educators and local communities to work together to identify and prioritize much-needed services and resources.”

Easing the impact of declining enrollment

Recognizing the steep enrollment drop California districts have seen since the pandemic, Newsom is proposing giving districts the option of being funded on a three-year average of daily attendance rates. This would soften the blow that many districts expect in the 2022-23 school year, when they are no longer “held harmless” for the enrollment declines.

The state’s hold-harmless provision applied to the 2020-21 school year, when districts were relieved of taking attendance and were funded based on the pre-pandemic 2019-20 school year attendance. Districts are again being funded at that rate this year but have resumed taking daily attendance to determine funding in 2022-23.  The proposal for a three-year average, starting next year, would initially combine attendance from 2019-20, 2021-22 and 2022-23, according to the Department of Finance.

Newsom’s administration attributed the loss of enrollment, which most districts are anticipating, to gradual birth rate declines that preceded the pandemic, as well as fewer people moving to the state during the pandemic and parents considering alternatives to their neighborhood public schools.

Newsom said his administration will work with legislators on “potentially more permanent and new approaches” to the funding formula. State Sen. Anthony Portantino, D-La Cañada Flintridge, has introduced a proposal to replace average daily attendance from the formula starting in 2023-24 with funding based strictly on enrollment.

Building on last year’s $2.9 billion dollar investment in teacher preparation, retention and training, the proposed budget includes more than $54 million to recruit teachers and make it easier for them to earn a credential.

The state’s teacher shortage has grown exponentially worse during the Covid-19 pandemic as more teachers are quarantined and fewer substitutes are available to take their places. To make matters worse, more teachers than usual have left the workforce.

To make it easier for potential teachers to earn a credential, the proposed budget will waive fees for some tests required for a teaching credential and some credentialing fees. It’s not yet clear which fees will be waived.

It will provide $10 million for universities to develop programs that allow teacher candidates to take coursework while practicing in a classroom with a teacher mentor.

To better recruit teachers, the proposed budget also allocates $5.2 million for assistance teams to help school districts improve hiring practices and $900,000 to the Commission on Teacher Credentialing to hire an agency to promote teaching as a career.

“Gavin Newsom’s proposed 2022-23 state budget is a bright light amidst all the stress and uncertainty that teachers, schools, students and parents have experienced throughout this pandemic,” said Mary Vixie Sandy, executive director of the Commission on Teacher Credentialing. “This budget will, simply put, improve the experience of becoming a teacher and working in a classroom.”

The budget calls for big changes to special education funding with an additional $500 million, plus a streamlined funding system. Under the governor’s proposal, money for students with disabilities would be calculated by school districts and county offices of education instead of intermediary agencies called Special Education Local Plan Areas, or SELPAs. Cost-sharing pools to help schools pay for the most costly disabilities would be merged.

The idea is to pair a funding increase with policy changes to improve special education services overall, but SELPA leaders decried the proposal as “catastrophic” for smaller districts and said it would lead to inequitable services.

“What is hard for me to understand and comprehend is the amount of proposed changes to a funding system that has been intact for decades during this time of crisis and incredible demands,” said Veronica Coates, head of the Tehama County SELPA. “I believe there are other innovations to look at that would meet the goals. … This level of reform requires much discussion and public engagement, including parents and families.”

SELPAs would still play an important role in planning services for children with disabilities, but a simplified funding structure would provide more transparency and accountability for districts, said Department of Finance analyst Chris Ferguson.

Also related to special education, Newsom proposed an additional $10 million for dyslexia research at the UC San Francisco. The university’s Dyslexia Center focuses on research, early interventions and educational strategies to help students with dyslexia, a reading disorder that Newsom struggled with as a child.