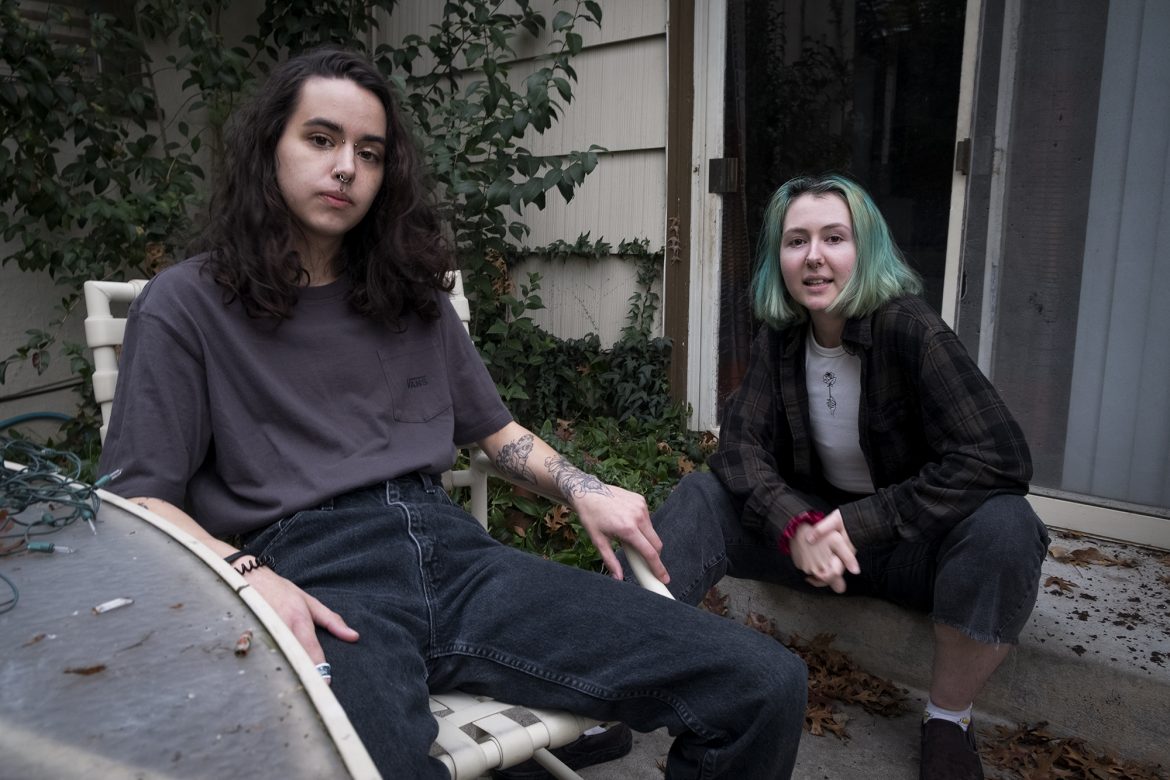 Eli Fox and Jamie Marquis at their home in Sacramento on Dec. 4, 2021. Photo by Karlos Rene Ayala for CalMatters

A junior psychology major at the University of California, Davis, who identifies as non-binary, they changed their name several years ago. But since then they’ve struggled to get that name even on basic educational records, instead of their name assigned at birth that they do not identify with, commonly known as a deadname.

“I wish that there was a way to really explain to cisgender people how being deadnamed feels,” Marquis said. “It’s humiliating. It makes you feel out of place and unwelcome, because of all the things about your identity, even your name is being ignored.”

A new state law could make a huge difference for people like them, Marquis said. Not only could it ease anxiety, but it could also provide important protections from discrimination and harm.

The new law, which takes effect on Jan. 1, requires the state’s public colleges to update records for students who have legally changed their names. It also allows graduates to request an updated copy of their diploma at no cost to them.

Then, starting with the 2023-24 class, it will require institutions to allow students to self-identify their names on diplomas, even without legal documentation of a name change. (The legislation does not specifically require colleges to let students self-identify their names on educational records besides diplomas without legally changing their name. It also does not affect how people are identified on legal documents used for tax, immigration status and other purposes.)

California is the first state to enact such a law. A previous version failed in the Legislature in 2020.

The right to self-identify one’s name on a college diploma helps protect transgender and gender non-conforming students, advocates say. Research shows that transgender people are at higher risk of discrimination and violence.

More than one in four trans people has experienced a “bias-driven assault”, with rates even higher for trans women and trans people of color, according to the National Center for Transgender Equality.

Academic records listing a student’s name and gender as assigned at birth could potentially “out” that student’s identity, which can put them at a significant disadvantage when seeking housing and employment, said David Chiu, who authored the bill while representing San Francisco in the state Assembly. Chiu, now the San Francisco city attorney, said he was asked by Equality California and other transgender activist groups to draft the bill.

“A college diploma represents years of hard work and academic achievement,” Chiu said in an interview. “It shouldn’t cause stress or harm by having someone’s deadname on it because of outdated school policies.”

In California, public colleges have been using a range of policies about what names they record on diplomas and in other records, as no statewide policy existed. In November 2020,  the University of California system put in place a policy — the Presidential Policy on Gender Recognition and Lived Name — that ensures that all individuals are identified by their accurate gender identity and preferred name on university-issued documents and in UC’s information systems.

At California State University and the California Community Colleges, there have been no system-wide policies, spokespersons said. But the two systems support the new state law, they said.

Some campuses have put their own policies in place. American River College in Sacramento County, for example, adopted an affirmed name policy in 2019, which allows students to change their names in campus computer systems, and in early 2020, to self identify their name on their diplomas.

The change, college officials said, has been powerful and emotional for students. Emilie Mitchell, interim dean of social and behavioral sciences at American River College, described her experience helping a former student change their name in the college’s computer system.

“This person was just crying when they were talking about going into classes, and professors often read the roster out loud, and it was their deadname,” Mitchell said. She said she could hear the retraumatization they experienced.

Within five minutes, Mitchell was able to change the student’s name in the system.

“I thought, that’s such a small thing, right?” Mitchell said. “All I did was click a couple of boxes, literally, but this person’s experience, their educational experience, their sense of being validated in their identity, was so profound.”

Eli Fox, a junior psychology major at California State University, Monterey Bay, changed their name during their first few months of college but said they had to deal with a lot of stress due to their deadname being on high school documents.

“It was really tricky to get everything to line up,” Fox said. “There are a lot of school administrative people who aren’t really educated, and it was really difficult trying to educate them and also advocate for myself.”

High-school teachers, college professors, and administrators have often resisted respecting their name or helping them change their school documents, Fox said. They often asked Fox invasive questions about their transition that made them feel like they were just being nosy.

“No one should have to explain their identity or justify the way that they are to anybody,” Fox said.

Fox said they are relieved to see the law pass, as it will make the process easier for future students like them. Fox aspires to use their degree in psychology to work in data gathering and research, and wants to continue their education in biopsychology, and incorporate social theory into science.

Fox says they have gained so much knowledge just from being queer and being around queer people. They hope to help show LGBTQ+ youth of the future to be proud of who they are while looking different or feeling different.

Michelle Haggerty, a psychology professor who advises the Queer Student Union at College of the Redwoods in Eureka, said the new state law will help to reduce the anxiety of both students and professors and to create a more accepting environment on campus. If students are able to update their names on school records before the semester starts, it will erase any awkward scenarios where the professor may deadname a student by accident, Haggerty said.

She also said this new policy will help students after they graduate, lessening how much they may have to explain their name or who they are to future employers. Haggerty has known students who have quit their jobs due to discrimination and invasive questions about their transitions, she said.

“Depending on where you are, it makes people feel unsafe,” Haggerty said of being transgender or gender non-conforming. “Different industries and different communities will look at these things differently… I think it’s hard to make a judgment on ‘Am I safe or not?’ and ‘Who can I reveal these aspects of myself to?’”

The new law could help protect cisgender college students, too.

Linda Johnson — a sophomore at College of the Redwoods who has earned a bachelor’s degree from Pomona College and a master’s degree from Fuller Theological Seminary — said that she was unable to have her maiden name printed on her diploma. At a time when she was going through a divorce from an abusive spouse, she wasn’t able to feel happy or excited when she received her diploma. Instead, she didn’t even want to look at it.

“It would have been so much easier if I could have gone and said ‘This is what I want’ without having to wait for all of the legalities to catch up,” Johnson said.

Marquis, the Davis student who is also an American River College graduate, remembers the anxiety of a day when they walked up to the counter of the community college’s records and admissions office to update their academic records. Had they forgotten a document? Would they be met with help or hindrance?

“It’s so awkward and uncomfortable to have to go up to every teacher, every front desk staff, every doctor, and explain the situation,” they said. “And it’s draining to constantly be polite to the people that want to tell you all about how hard it is for them to remember.”

When the process went smoothly, they felt a sense of bewildered relief. But their name-change journey still wasn’t over. When they transferred to UC, they had to present records from high school which still used their deadname.

Now, Marquis hopes the new law will remove some of these roadblocks — and that that could help them finally just be themselves at ease.

As a beacon of hope, Marquis aspires to take this experience with them as they enter the field of psychology after college and work with mentally ill queer children, letting them know it is ok to be themselves, whoever that may be.

Taylor is a fellow with the CalMatters College Journalism Network, a collaboration between CalMatters and student journalists from across California. This story and other higher education coverage are supported by the College Futures Foundation.