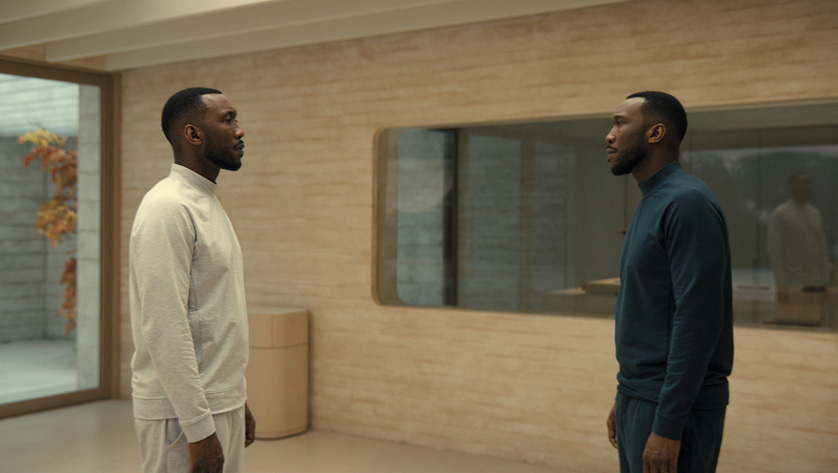 The Hollywood red carpet gets rolled out this Saturday in San Francisco’s Castro District while two Bay Area natives deliver Oscar-worthy performances in separate films. Those notable attractions nuzzle cinematic shoulders with two holiday chestnuts in San Rafael while an updated version of Francis Ford Coppola’s “The Cotton Club” and even a holiday confection that features some chiseled abs up in the Wine Country vie for our attention, and affection.

This week’s Pass the Remote covers them all.

The Castro Theatre is the hot spot for movie fans this Saturday when “The Matrix Resurrections” cast — including Keanu Reeves, Carrie-Anne Moss, UC Berkeley grad and former San Francisco city planner Yahya Abdul-Matten II, amongst others — walks the red carpet for the world premiere of the much-anticipated sci-fi thriller/romance. As many San Franciscans can recall, the latest installment in the series was filmed largely in the city and is packed with daring action sequences set on the streets of San Francisco. Can’t score a ticket? Don’t fret, it’s coming out Dec. 22 in theaters and on HBO Max.

San Francisco native Simon Rex enters the awards conversation, as he should, with a slam-bang performance as Mikey, a rogue of a porn star who learns the hard way that he shouldn’t go home again to small-town Texas. Rex is in every scene of Sean Baker’s “Red Rocket,” and he’s on fire throughout, delivering the performance of the year. The former Alameda High School student gets strong support in Baker’s edgy dark comedy from up-and-coming talents that include Suzanna Son as teenage doughnut shop worker Strawberry, whom Mikey flirts with; Bree Elrod as Lexi, Mikey’s estranged and long-frustrated wife; and first-time actor Brenda Deiss, as Mikey’s suspicious and drug-taking mother-in-law. “Red Rocket” opens Friday in area theaters.

Although Rex was weirdly denied a Golden Globes nomination, another East Bay native landed one this week. Multiple Oscar winner and Oakland native Mahershala Ali is the best part of the slightly futuristic “Swan Song.”

The beautifully shot AppleTV+ feature (Vancouver is staggeringly photogenic here) finds successful advertising artist Cameron (Ali) going to extreme lengths to hide from his wife (Naomie Harris) and son (Dax Rey) that he’s dying. Cameron decides to participate in cutting-edge technology overseen by a brainy doctor (Glenn Close) who offers to replace him with a mirror image of himself.

Moral questions abound in screenwriter/director Benjamin Cleary’s somber drama, but they’re not always adequately addressed in a story that’s focused more on moving us (which “Swan Song” does to perfection) than spending time pondering the significance of what these tricky advancements portend. Regardless, Ali makes every gesture, every minuscule facial expression so soulful, you’ll feel his ache deep, deep inside. Awkwafina costars as another “patient” who went through with the process. (Debuts Friday in select theaters and on AppleTV+.)

With this year’s avalanche of Christmas-themed Netflix and Hallmark movies and specials, you might wonder why bother with seeing a few holiday chestnuts up on the big screen.

But when they’re two classics such as Frank Capra’s 1946 new-lease-on-life “It’s a Wonderful Life” and the family dance favorite “The Nutcracker,” watching them as a communal experience can’t help but pep up your spirits. Fans of just one or both get their chance to rejoice in the seasonal spirit at the Smith Rafael Film Center when the Jimmy Stewart redemptive drama and the Royal Ballet’s filmed stage production featuring the Sugar Plum Fairy delight screens twice.

Although Francis Ford Coppola’s “The Cotton Club” failed to tap dance away with great reviews when it was originally released in 1984, a recent 4K digital restoration version entices us to take another look at the period-rich drama set in a ’30s Harlem nightclub. Certainly the cast will: Richard Gere, Diane Lane, Gregory Hines and Nicolas Cage.

Should you simply want to check out mentally and check out some killer abs, Netflix provides with the Petaluma-San Francisco-shot holiday confection “A California Christmas: City Lights.” The sequel to 2020’s “A California Christmas” continues the lovey-dovey relationship between Callie and Joseph (real-life couple Lauren and Josh Swickard), who leave Petaluma for San Francisco and find their love getting tested by Joseph’s family biz. Will it drive a wedge between them? Or will there be another sequel? You might get some answers when the new movie drops Thursday on Netflix.