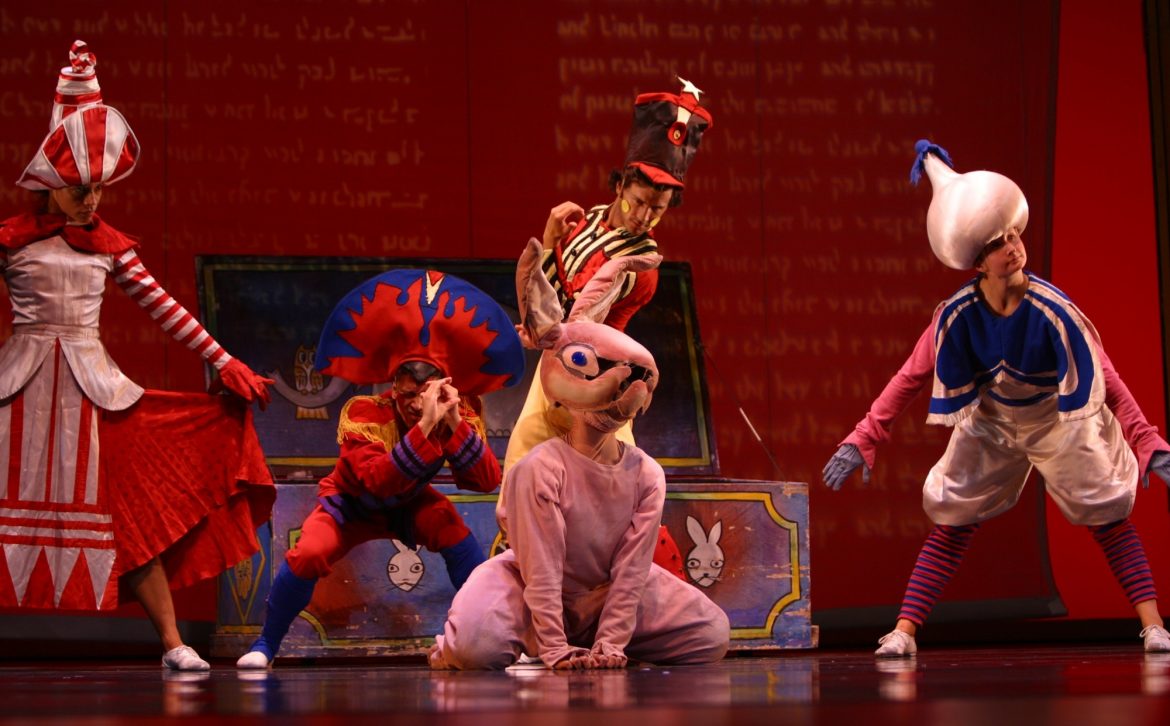 ODC/Dance brings its holiday favorite "The Velveteen Rabbit" to the Yerba Buena Center for the Arts in San Francisco. (Bing Gordon/ODC/Dance)

Tetzlaff on tap: The phenomenal German violinist Christian Tetzlaff, renowned for his keen intelligence and exquisite expressivity, is the featured soloist for the San Francisco Symphony’s run of concert programs this weekend, playing the Violin Concerto of Edward Elgar that was such a hit when Fritz Kreisler gave its world premiere in 1910 London, the composer was called back to the stage 15 times.

One other monumental work, the Tchaikovsky Symphony No. 5, completes the program in Davies Hall, which will be conducted by Simone Young, who is due to step up as chief conductor of the Sydney Symphony in Australia in 2022.

A unique collaboration: “More Forever” is the title choreographer Caleb Teicher and pianist/composer Conrad Tao have given the unusual dance and piano program, which will receive its Bay Area debut at 3 p.m. Sunday in Berkeley’s Zellerbach Hall, with Tao performing his piano and electronic score live.

The evening-length work (no late seating) features the dancers of Teicher’s company, working in a thinly layered 24-foot sandbox on stage (which adds to the percussiveness of things), interpreting various forms of dance, including tap, the Lindy hop and jazz.

Tickets for the performance, $32-$78, are available at calperformances.org and (510) 642-9988. If you’re having trouble visualizing the collaboration, check out this short excerpt of the work, filmed when it premiered when Tao was an Emerging Artist at the Lincoln Center in New York in 2018: https://youtu.be/p_iZoolTmKw.

Think Pink: The Oregon band Pink Martini is like the Roy Clark of the 2000s, an artist of stunning virtuosity that would rather be liked than revered. Just like late Clark would bust a grin or joke or two on the TV show “Hee Haw” before uncorking a head-spinning riff on his banjo or guitar, Pink Martini gleefully embraces all the kitsch and sass that a jazz/cabaret/lounge act is supposed to, and dispenses plenty of humor during its high-energy shows.

But make no mistake, this 12-piece band (plus vocalist China Forbes) can absolutely bring it. It’s just that Pink Martini’s concerts are so darn much fun you tend to overlook the fact that these razor-sharp musicians led by founder/pianist Thomas Lauderdale (an Oakland native) are making it look easy. There’s a reason why the band has mastered everything from swing to Tin Pan Alley to French cabaret to Latin jazz to Spaghetti Western movie scores — these musicians are that accomplished. Oh, and holiday songs. Pink Martini can play them, too.

The band is bringing its holiday show to Northern California beginning this week, and you have several chances to see it (though you shouldn’t dawdle in buying tickets, this group often sells out). Pink Martini plays six shows Thursday through Sunday at the SFJazz Center ($65-$175), and the Friday show at 7:30 p.m. will be livestreamed. You can also stream a rebroadcast of that show at 11 a.m. Saturday or view it on demand for 90 days. Go to sfjazz.org to get tickets or streaming information, as well as info on COVID precautions. Meanwhile, the band also plays Rio Theatre in Santa Cruz at 7:30 p.m. Dec. 11 (52.50-$78.75; kuumbwajazz.org) and 7:30 p.m. Dec. 13 at Livermore’s Bankhead Theater ($20-$95; livermorearts.org)

Unwrapping the classics: Feeling nostalgic? Two cherished American nuggets are onstage in the South Bay these days. Let’s start with San Jose Stage Company, which is presenting a Charles Dickens classic that isn’t “A Christmas Carol.” Instead, the company is tackling perhaps the author’s most acclaimed novel “Great Expectations,” which is packed with so much stuff — love, heartbreak, poverty, fights to the death, mystery — it’s like a whole season of “Dynasty” in one book (or one two-hour play). The San Jose Stage production runs through Dec. 12 in downtown San Jose. Admission is $32-$72. Go to thestage.org to purchase tickets, check out COVID requirements or get more information.

Meanwhile, TheatreWorks Silicon Valley is opening a novel take on the beloved (to some people) film “It’s a Wonderful Life.” This adaptation presents a five-person cast performing dozens of roles each in a radio-play version (including sound effects, etc.) of the tale of Christmas redemption. The production is in previews through Friday, with the main run going Saturday through Dec. 26. All performances are at the Lucie Stern Theatre in Palo Alto. Admission is $25-$95; go to theatreworks.org to buy tickets, check COVID requirements and find more information. And if you can’t make it to the South Bay, Town Hall Theatre in Lafayette is putting on the same show, with what we are told are some bold casting arrangements ($18-$35; townhalltheatre.com).

Dances with rabbits, kitchen utensils: Bay Area dance companies are starting to break out their holiday shows, and two time-honored kid-oriented productions take center stage this weekend. ODC/Dance is presenting, for the 35th year, “The Velveteen Rabbit,” KT Nelson’s adaptation of the popular 1922 kids’ book about a stuffed bunny who dreams of becoming real through the love of its owner.

The production is set to a score by Benjamin Britten and is buoyed by cute and colorful sets and costumes and a menagerie of lovable characters captured with youthful energy by the ODC company dancers. The production will be performed live Saturday through Dec. 12 at the Yerba Buena Center for the Arts in San Francisco, and will also be offered as a streaming show. Admission is $25-$100. Go to odc.dance for tickets, COVID precautions and more information.

Also opening this weekend is “Mark Foehringer’s Nutcracker Sweets,” so-named for the choreographer, producer, director, dance company leader and friend to parents everywhere. His adaptation of the classic Nutcracker is a 50-minute speed-dialing version aimed at young dance fans with short attention spans. Yet there is plenty in this production — wonderful dancing, with lively sets and costumes — to make it a treat for adults as well. The show will be staged live Saturday through Dec. 19 at Cowell Theater at San Francisco’s Fort Mason Center for Arts & Culture. Admission is $22.50-$44.50; go to mfdpsf.org for tickets, COVID requirements and more information.