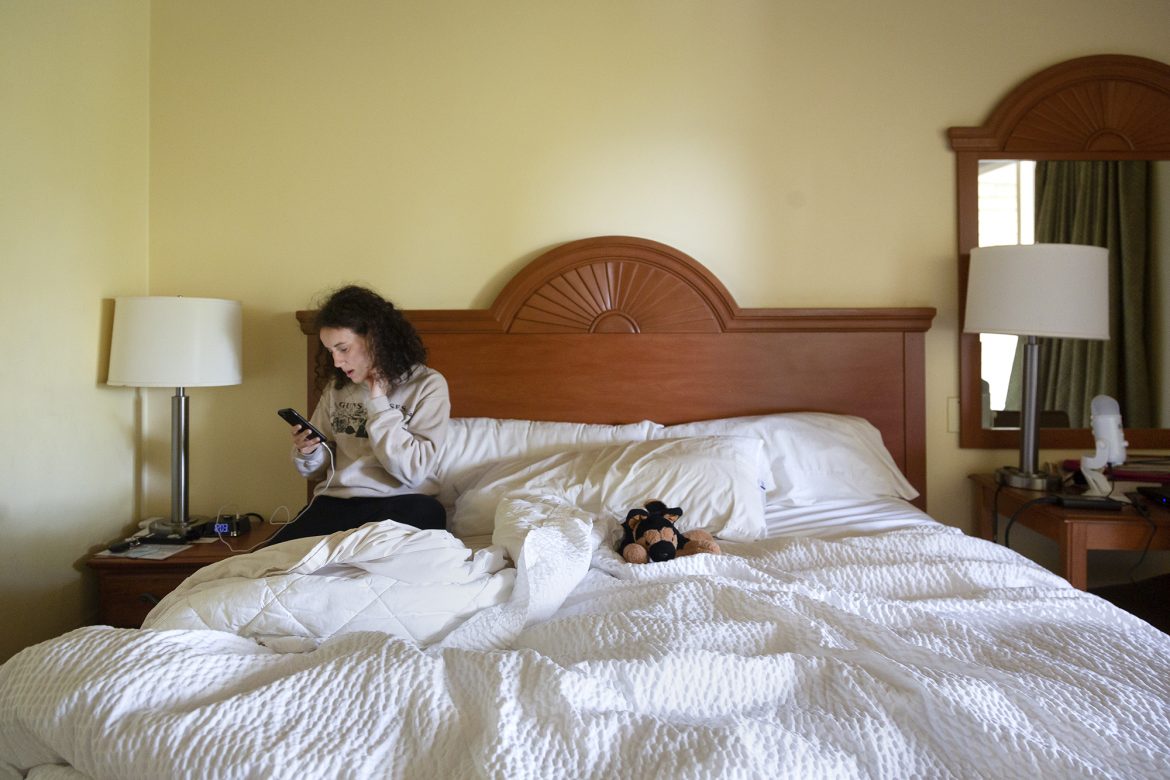 Sarah Hamidi, 22, a senior at UCSB, checks her phone in her hotel room on Nov. 17, 2021. Hamidi who applied for housing in hopes of getting an apartment was met with a waitlist, then given a temporary hotel room in Santa Barbara that she has occupied since Septempber of 2021. Photo by Julie Leopo for CalMatters

Zarai Saldana expected to kick off her senior year at UC Merced from a brand-new apartment where she’d already signed a lease. Instead, the transfer student spent the first two weeks of the school year shuttling from hotel to hotel.

Construction delays had held up the opening of Merced Station, the private student apartment complex where she’d planned to live, leaving more than 500 of UC Merced’s 9,000-plus students without housing.

In hotel rooms paid for by the university, Saldana and her roommate took turns studying or eating on the one desk. With no kitchen, she couldn’t prepare food. And because the hotels had to make room for non-student guests who already had reservations, she said, the university assigned her to three different hotels in a span of 11 days. The constant moving affected her studies.

“I didn’t start off as well as I hoped I would,” she said. “I started falling behind.”

Saldana eventually found a room to rent off campus. But her experience reflects that of thousands of students across the UC system who were eager to return to campus life this fall after a year of online learning during the pandemic and found themselves scrambling to find housing. Unable to secure dorm rooms or afford pricey off-campus apartments, some ended up in unconventional housing — local hotel rooms.

At least four UC campuses offered a hotel option, providing temporary relief to hundreds of students. But the financial support that went along with them varied from campus to campus. And for many students, finding more permanent, affordable housing remains elusive, even as the end of fall quarter nears.

Affordable housing has long been an issue for California’s public universities. In 2020, 16% of UC students lived in hotels, transitional housing or outdoor locations because they didn’t have permanent housing, according to a report from the state’s Legislative Analyst Office. Though the UC system has added about 20,000 more beds across its 10 campuses since the 2015-16 school year, there were still more than 7,500 students on waitlists to get on campus housing during Fall 2021, the LAO found.

The pandemic exacerbated UC’s housing crunch. Administrators said uncertainty around whether instruction would be in person or online created a last-minute rush of students applying for housing after those decisions were made. To keep campuses COVID safe, some set aside beds for quarantining students who become infected and lowered density in dorms, meaning fewer beds were available. And in coastal cities like Santa Cruz and Santa Barbara, students found themselves facing housing markets that were transformed by the pandemic. Besides camping out in hotels, some resorted to other extreme measures to counter the high cost of living, including couchsurfing and commuting long distances.

The UC Merced students who were living in hotels have since moved into apartments or on-campus housing, said Vice Chancellor for Student Affairs Charles Nies. But UC Santa Barbara, UC San Diego and UC Santa Cruz have also turned to hotels to house students.

As of Nov. 16, there were 280 UC Santa Barbara students staying across 10 different hotels contracted by the university, Mario Muñoz, associate director of Residential and Community Living, said during a Nov. 16 town hall meeting. That’s down from roughly 350 earlier in the quarter after some students were able to secure housing elsewhere.

University officials said that students in hotels are paying $26 per day, the equivalent of a double-occupancy space in university-owned apartments, and the school is covering the remaining $175 per day.

Fifth-year student Sarah Hamidi said she started searching for housing in June, after the university announced it was returning to in-person instruction. But she was put on a waitlist and told that residence halls and apartments were already full. And she couldn’t find housing in the nearby communities of Isla Vista and Goleta.

One week before school started, Hamidi received an email from the university offering a room at Ramada by Wyndham, and took what she saw as her only option. She commutes to campus by car, cooks some of her meals in an instant pot and orders from DoorDash for the rest.

The housing struggle came on top of an already frustrating end to her college experience. She recently learned she couldn’t finish her chosen major because of a low grade in one class. When she signed the housing contract, she said, she cried.

“This is my last year at UCSB,” she said. “I couldn’t believe that was my situation.”

UCSB senior Madeline Castro is paying $750 out of pocket per month for a room at the Pacifica Suites. She has her own space with a king-sized bed, a little mini fridge and microwave, and a desk, but says she finds herself feeling lonely.

“The whole point of coming to college is to have the roommate and fun experience, right?” Castro said.

Initially, students faced a December deadline to either find housing elsewhere or pay the hotel price on their own. Castro said she was having trouble saving for a deposit, and searching for a place in Santa Barbara’s punishing housing market left her “super stressed.”

The plight of students in hotels became a rallying point for Food Not Bombs, a local mutual aid collective, which organized a Nov. 5 rally calling on the university to extend the hotel contracts.

Hundreds of students attended, spurred by backlash against a campus housing proposal dubbed “Dormzilla” in press reports and social media. The proposed 4,500-bed building, Munger Hall, has been criticized for its design, which includes windowless dorm rooms.

At the Nov. 16 town hall, Muñoz said the university is planning to extend hotel contracts into the winter quarter for those who need them.

“At this point, we are looking to prioritize moving the students who are in hotels into campus housing. Our intent is that anyone who is currently in a hotel will receive an offer of either campus housing or an extended hotel contract into the winter quarter,” Muñoz said.

While UC Santa Barbara is subsidizing the cost of hotel rooms for students, and UC Merced paid the entire bill plus shuttle service and grocery store cards, students who resort to hotel living at UC San Diego must pay their own way.

For example, students can book a room at the Residence Inn San Diego Del Mar for $169 per night. But even that discounted rate works out to about $5,000 per month. UCSD spokesperson Leslie Sepuka said the university does not pay students’ hotel bills, but they can apply for a one-time subsidy to cover part of the cost through the school’s Basic Needs Hub.

While hotels might be nice for the amenities, they’re not a feasible option for low-income students and those who don’t get financial support from their families, said UCSD sophomore Kida Bradley.

“It’s like putting a Band-Aid on a bullet wound,” Bradley said. Instead, she and another student involved in UCSD’s student government drafted a proposal to administrators calling on them to provide more on-campus emergency housing and allow couch-surfing in dorms.

The monthly rate of $2,700 includes continental breakfast. Students pay what traditional on-campus graduate student housing costs — $1,247 a month — while the university subsidizes the rest. Like other students housed in hotels, the graduate students have nowhere to cook meals.

Rojina Bozorgnia, a UCSC senior and vice president of external affairs of the Student Union Assembly, said the hotel is a good option for students who currently can’t find housing, but it’s not a long-term solution.

“It’s not really a sustainable way to deal with the housing crisis,” Bozorgnia said. “It’s a very short-term solution to a problem that we haven’t addressed in a long-term fashion.”

“Those landlords [are] now trying to take predatory approaches to recovering from COVID by drastically upping rent as rent protections are ending in some of our UC campus cities,” he said.

California lawmakers are looking for solutions. They committed $500 million to student housing in this year’s state budget  — a figure that experts say pales in comparison to the need.

An Assembly subcommittee on education finance recently held a hearing to discuss how the state can further support California’s public colleges and universities to build affordable student housing. Assemblymember Kevin McCarty (D-Sacramento), the subcommittee’s chairman, said most college administrators have told him they want to create more campus housing because it’s a low-risk business proposition with a captive market: students.

“If you build it, they will literally come, because they’re there anyway,” McCarty said.

But campuses’ concerns about taking on too much debt, environmental regulations and community opposition have all contributed to slowing the pace of construction. UC officials have advocated for lawmakers to create a permanent revolving loan fund with zero percent interest that colleges can borrow from.

In the meantime, Hamidi, the UC Santa Barbara student, is still unsure of her plans for the rest of the school year. She’s applied for university housing for winter quarter. She said if she doesn’t receive a contract, she’ll continue to stay in a hotel.

For Castro, winter quarter looks more promising. She recently secured a spot in the university apartments off campus, after being put on a priority list. But she’s aware that many of her fellow students are still unhoused.

“I feel relieved now, but not everyone has that,” she said.

Loyola and Ananthavel are fellows with the CalMatters College Journalism Network, a collaboration between CalMatters and student journalists from across California. Marnette Federis contributed reporting. This story and other higher education coverage are supported by the College Futures Foundation.