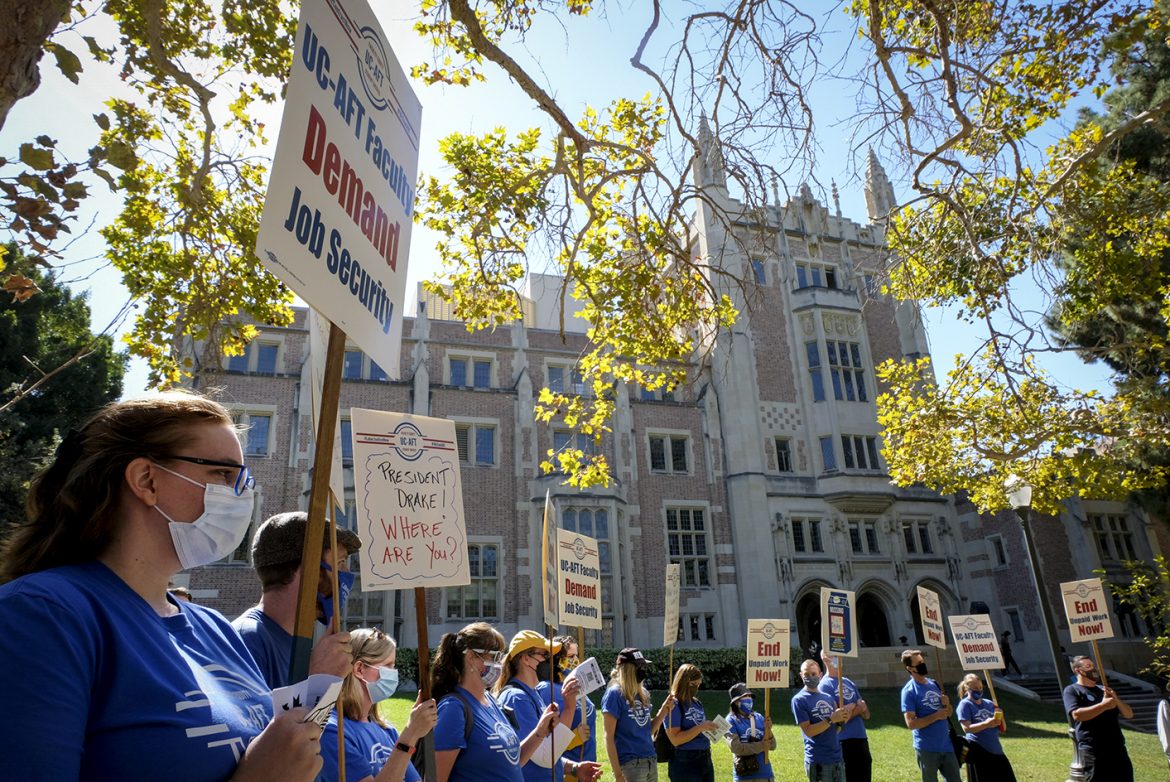 Instruction will likely halt for two days for thousands of undergraduates at University of California campuses beginning Wednesday as lecturers strike over allegations of unfair labor practices.

The strike planned for this week is related to, but separate from, the larger saga of contract sticking points. At issue is what the union says are seven instances of unfair labor practices by UC leadership going back 20 months.

UC lecturers typically teach a third of the instruction UC undergraduates receive. About 6,500 lecturers are union members but roughly 4,500 teach at any given time.

The lecturers’ union, University Council-American Federation of Teachers, has been negotiating for a new contract with UC leadership since April 2019. Because the two sides have been unable to strike a deal, a state labor mediator got involved this summer, a sign of how deeply rooted the labor dispute is.

Union officials said the strike will occur regardless of what happens before Wednesday. “Our strike notification is not conditional,” said Caroline Luce, a lecturer and spokesperson for the lecturer union.

But Tuesday morning, the union walked back the absolute certainty that a strike will happen. “It is likely, but it is not inevitable,” said Mia McIver, the lecturer union president.

The UC negotiating team can offer two things Tuesday that may call off the strike. Both are the latest unfair labor practices the union filed against the university.

First, McIver said the union wants all of its lecturers to be eligible for paid family leave for eight weeks at 100% of pay. She said the UC isn’t budging on its offer: paid family leave at 70% for lecturers who worked 1,250 hours in a year, which excludes most lecturers because of how many are part-time. The union also wants the UC to stop sending out summaries of the contract negotiations to its members, which the union argues are misleading.

Classes taught by instructors who aren’t striking or canceling classes in solidarity will continue as normal.

The lecturer union says the UC violated labor law by going outside of mediation last month and issuing a proposal to lecturers that had an expiration date of just four days, including a take-it-or-leave-it $500 bonus for every lecturer if the union agreed to the UC’s contract. The timing of that was suspicious, the union claims, because it happened just before lecturers were staging protests at campus. “This was an unlawful pressure tactic,” the union alleges in a labor court filing last Friday.

The lecturers also accuse UC President Michael Drake of misrepresenting the system’s offer in a letter to lawmakers.

“The union’s unfair labor practice claims against UC are neither supported by the facts nor any finding by the California Public Employment Relations Board,” said in an emailed statement Ryan King, a spokesperson for the UC office of the President.

While state labor court cases indicate a union cannot strike while it’s in mediation, it can strike over what it sees as unfair labor practices. The UC could seek injunctive relief from a judge to stop the strike, but so far that hasn’t happened.

A Wednesday strike deadline “will result in the widest possible labor disruption,” wrote McIver in an email to CalMatters. The union called for a strike in advance because its legal counsel recommended giving a 72-hour notice to the UC.

The UC system called the strike unnecessary. “The University of California is disappointed with UC-AFT’s decision to pursue a two-day strike — withholding instruction is grossly unfair to our students and a strike does not move us closer to a contract,” wrote King.

Coming despite a flurry of activity that saw several powerful state senators and assembly members pressure the UC last month to settle the labor dispute, the impending strike may signal the limits of state lawmakers’ ability to pressure the university to meet the lecturers’ demands.

Not every lecturer working at the UC can strike this week. Some lecturers in specific fields — medical centers, medical clinics, student health centers, and K-12 schools — have different guidelines for notification about a strike and aren’t part of the work stoppage.

The threat of a more prolonged strike is still in play if the union doesn’t get what it wants from the UC once the state-sponsored mediation process ends.

Somewhat unusually, the UC and lecturers are negotiating behind closed doors through the state mediator and more publicly in collective bargaining. Adding to the confusion — and awkwardness — is that the union and UC management met to try to settle the new contract Monday and will meet again today.

“I think it would be a great relief to everyone if in these past two days of bargaining, a deal was reached,” said Luce. “However, this strike is not about that bargaining process. This strike is about a pattern of unfair labor practices and bad faith bargaining by the UC.”

The UC lecturer union is trying to line up state lawmakers to speak at the UC campuses during the strike. Assemblymember Ash Kalra, a Democrat from San Jose who spearheaded a letter from 12 assembly members pressuring UC’s president to settle the dispute, will be speaking at UC Davis at 10 a.m. Wednesday. He leads the Assembly’s committee on labor and employment.

Kalra said workers have a right to strike and to show their frustration. “I hope that this strike will be the final action necessary in order to get both sides to an agreement and to get the UC to recognize that urgency,” he said.

A CalMatters investigation found that a quarter of lecturers leave the UC annually even as the system hires more of them. The reasons — virtually no job security and employee reviews until at least six years of continuous employment that few lecturers achieve plus poor pay coupled with assigning lecturers to part-time work — are at the crux of the labor standoff and contract negotiations.

While there have been some breakthroughs, the two sides are far apart:

Adding to the learning disruption are the roughly 700 tenure and tenure-track professors who pledged to join the lecturers at the picket lines. Other faculty work, such as meetings and workshops, will also halt.

In a letter sent to Drake Sunday, the faculty association of UC professors wrote that Drake’s office “will be responsible for the disruption to campus operations if they do not settle this contract.”

The impending strike adds to the labor headache besetting the university system and higher education in California more broadly. Two other UC unions with a combined 28,000 members are voting this week on whether to authorize a strike. The two labor groups — the union of academic researchers and the unrecognized-by-the-UC student researchers — work on the billions of dollars in UC research, including nearly $3 billion in federal research grants. A work stoppage could imperil those research efforts.

Meanwhile, the 29,000 faculty members who teach nearly 500,000 Cal State University students are in their own drawn-out labor dispute. That union, the California Faculty Association, is also in state-sponsored mediation with Cal State’s management. The talks are going poorly and the union is signaling a strike vote is near.