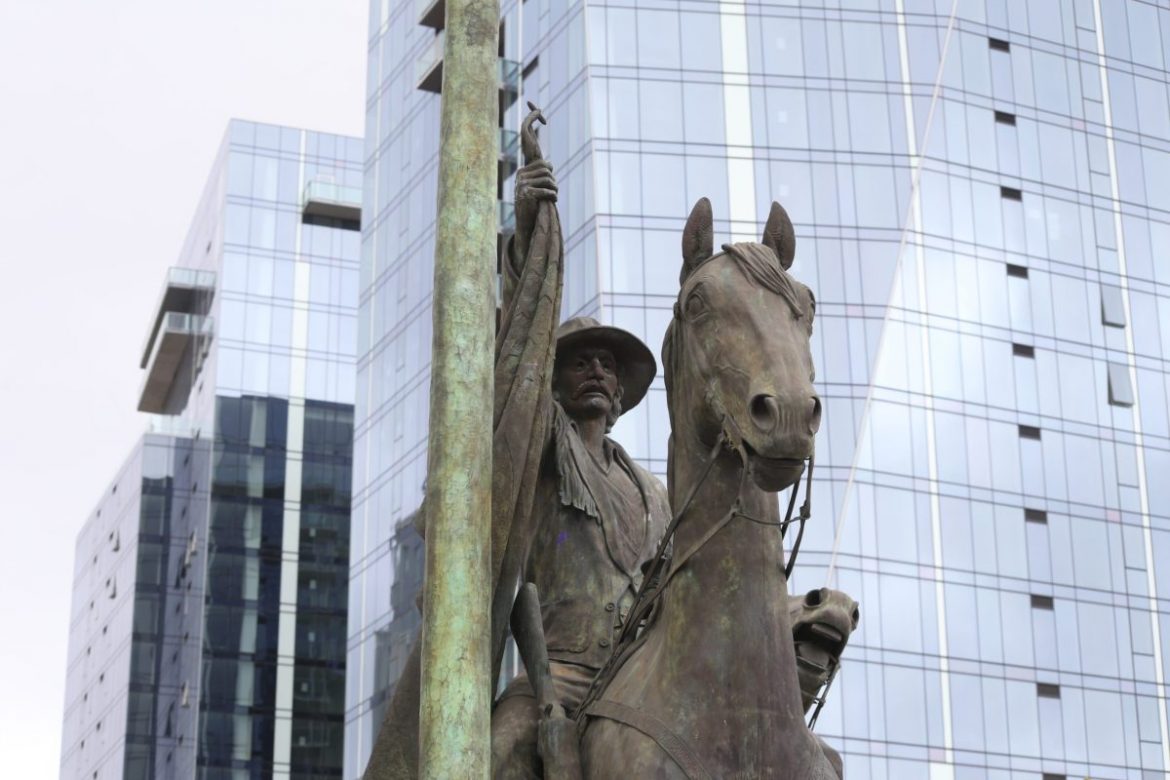 The controversial Thomas Fallon statue, which stood in downtown San Jose for about 30 years, is finally coming down.

On Tuesday, the city council unanimously approved the deaccession of the bronze structure that sat at the intersection of West Julian and West St. James streets.

The statue depicts Captain Thomas Fallon holding the U.S. flag in his right hand in San Jose in 1846 – on what was then Mexican land.

It has caused controversy since it was first erected in 1988. Many residents, primarily of Mexican and Indigenous descent, said the statue is a painful reminder of the colonization and genocide that occurred across the country while it was being founded.

Others, like former San Jose Mayor Tom McEnery who was instrumental in getting the statue up, said it was a symbol of San Jose finally becoming part of the United States. During public comment, McEnery cited city-commissioned historians, noting that the land grab in 1864 was a bloodless one.

Throughout the three decades, the Fallon statue was graffitied multiple times with words like “genocide” written on it or gallons of red paint spilled over it to symbolize the blood on Fallon’s hands during the Mexican American War.

In 2020 after the George Floyd protests, scrutiny and vandalization of the statue skyrocketed as the country reckoned with its history of racial subjugation and current systemic racism.

It was a confrontation that forced Mayor Sam Liccardo to call a public forum about the statue in February of this year where 162 residents participated – nearly all of which voiced concerns about the statue remaining in the city.

Eventually a resolution to decommission the statue made its way throughout various city committees before making it to the desk of councilmembers.

And for councilmembers, the justification to keep the Fallon statue up as part of San Jose history did not outweigh what it represented – a period of American expansion and imperialism.

“Fallon was an opportunist, a self-aggrandizing capitalist, a domestic abuser, a supporter of pro-slavery Democrats, and a minor political figure who died wealthy, but without admirers,” councilmember Sylvia Arenas said. “His positive image was crafted posthumously.”

Arenas, along with many others noted that not only does Fallon represent controversial values, but he was also historically inconsequential and insignificant.

Councilmember Maya Esparza said the fact that a statue was erected of Fallon at all was an example of the persisting systemic racism.

“First off, taking foreign lands, rewriting history, creating a false narrative, that the statue was erected at all?” Esparza said. “For many people in the West, this is Confederate history.”

Esparza also noted that it was the culmination of Latino and indigenous communities speaking out about the pain the statue has caused them that it is coming down now.

“And I’m glad that we’re finally at a point where we’re one listening to those voices and taking a look at whose history we’re celebrating and how,” the east San Jose councilmember said.

The statue meets three removal requirements from San Jose’s public art collection: it has experienced significant adverse public reaction for an extended period of time, its security cannot be guaranteed, and it requires excessive maintenance.

But for councilmembers, those rationales did not explain why they were voting to remove it.

“I don’t particularly like the notion that we should remove public art because we can’t protect it or because we can’t enforce laws against vandalism,” Councilmember Matt Mahan said. “I think there’s a much more important truth here that transcends those mere details.

“I am really concerned about the staff report, and that that’s what’s going to be in the public record for why we remove this statue because it really makes it sound like we’re removing this statue because of vandals,” Davis said. “The issue is that it has become a symbol that was I think not intended.”

Under the current resolution passed, the city will pay $175,000 for the removal and relocation of the 12,000-pound, 16-foot bronze statue to a city storage facility.

It will not be allowed to be erected in any part of San Jose or Santa Clara County, unless it was for educational purposes and placed in museums and places of higher education – an addendum of the Arts Commission.

However, many councilmembers during the Tuesday meeting advocated it be melted down.

“If it was up to the people who are opposing it – you’ve heard them loud and clear – they’d like to melt it,” Arenas said. “I’d also like to melt it.”

But Kerry Adams Hapner, director of cultural affairs for the city, said to do so would be a violation of the artist Robert Glen’s wishes, which was specfically for the city to not destroy his statue.

It could also place the city in a potential lawsuit, as Glen’s work is protected under federal and state laws like the Visual Artists Rights Act of 1990.

Councilmember Magdalena Carrasco worried that keeping it in storage would add additional costs.

“I don’t want to pay the storage for this thing. And I don’t think the residents are taxpayers should have to put the bill for something that they wanted removed,” Carrasco said. “It would just add insult to injury.”

It is unclear when exactly the statue will be removed but if there are additional costs to do so, it will have to come back to the council for approval.