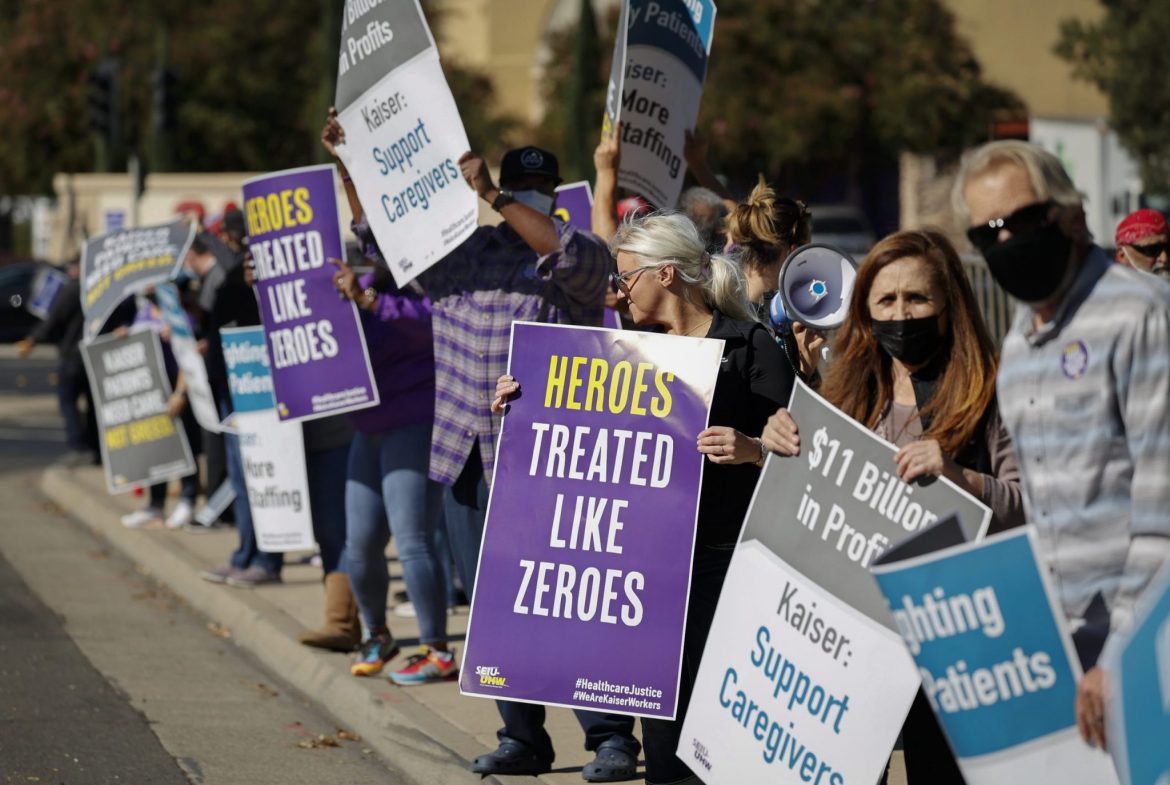 Hospital staffers and union organizers waved signs and banners in protest over staffing shortages at Kaiser Permanente Hospital in Roseville on Oct. 14, 2021. Photo by Fred Greaves for CalMatters

Wins are mounting for California workers as “Striketober” morphs into “Strikesgiving” and as the state cracks down on companies it says are violating labor laws.

Attorney General Rob Bonta on Monday announced an agreement with Amazon that, if approved by a judge, would require the e-commerce giant to pay California $500,000 to help enforce consumer protection laws, notify all warehouse employees about new workplace COVID-19 caseswithin 24 hours and local public health agencies within 48 hours, and allow Bonta’s office to monitor those notifications. The settlement comes from a lawsuit then-Attorney General Xavier Becerra filed against Amazon last year for allegedly withholding information about COVID cases and safety practices at its facilities.

Bonta said the agreement “sends a clear message that businesses must comply with this important law,” referring to a bill Gov. Gavin Newsom signed last year that requires employers to notify workers and county health officials about COVID-19 outbreaks. (A stricter bill that would have required the state to publicly report outbreaks by workplace location was watered down amid strong business opposition; infections will instead be reported at the industry level.) It’s also California’s second crack at Amazon in as many months: Newsom in September signed a bill that forces companies like Amazon to disclose speed quotas for warehouse workers.

And a strike that could have shuttered Kaiser Permanente’s Northern California outpatient pharmacies for a week was averted Monday morning, when the health care giant and pharmacists’ union reached a tentative agreement on a new contract. The announcement came two days after Kaiser and another union representing nearly 50,000 health care workers tentatively agreed on a new contract, avoiding what could have been the country’s largest work stoppage this year.

However, Kaiser is still negotiating with a union representing hospital engineers, which has been on strike since Sept. 18. To support the engineers, tens of thousands of other Northern California Kaiser employees — including nurses and mental health clinicians — are planning to hold sympathy walk-outs on Thursday and Friday.

And on Wednesday and Thursday, about 4,000 University of California lecturers will strike over the system’s allegedly unfair labor practices. They’ll be joined by roughly 700 professors, effectively halting instruction for thousands of undergraduate students, CalMatters’ Mikhail Zinshteyn reports. Separately, the lecturers’ union and UC leadership are negotiating a new contract, the terms of which have been under dispute since April 2019.

That’s not all. As Mikhail reports, two other UC unions with a combined 28,000 members are voting this week on whether to authorize a strike, and a union representing California State University faculty is also signaling a strike vote is imminent.