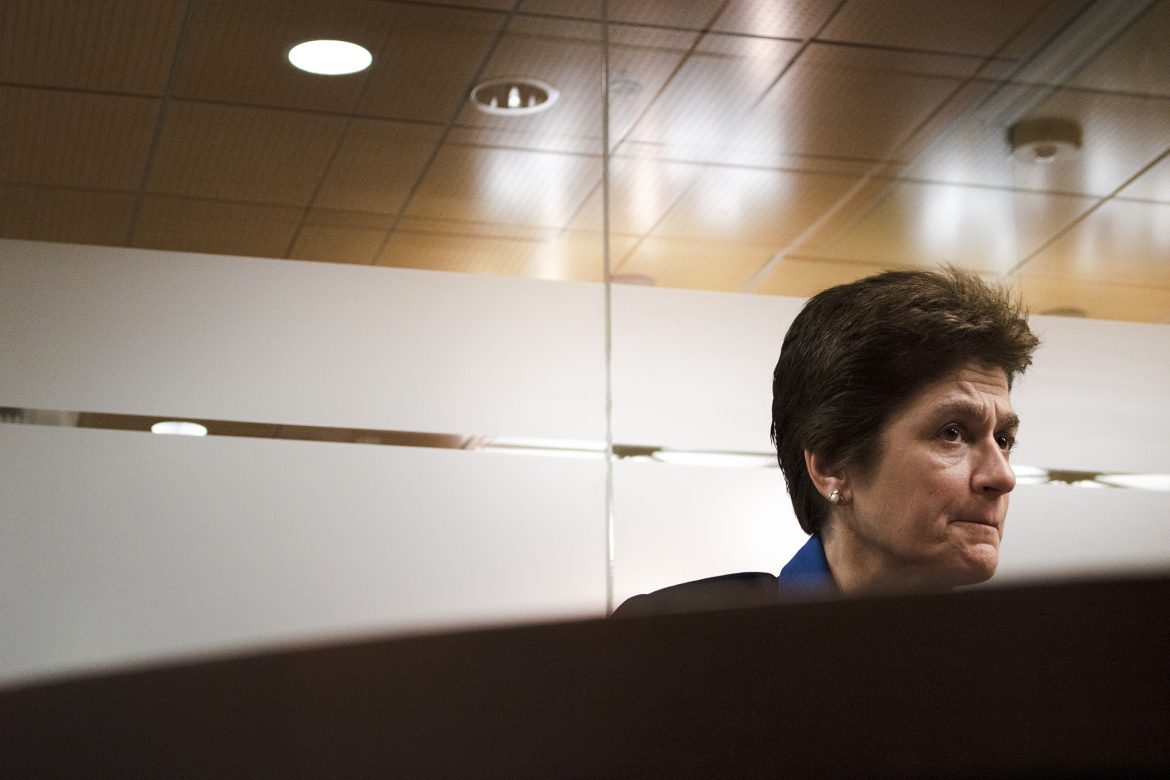 California State Auditor Elaine Howle speaks with CalMatters at her office in Sacramento on Nov. 9, 2021. Photo by Rahul Lal for CalMatters

Gov. Gavin Newsom will soon get to make yet another appointment with far-reaching implications: Who should lead the independent agency tasked with evaluating the performance of his own administration?

Elaine Howle — who has led the California State Auditor’s office for 21 years — announced last month that she plans to retire at the end of the year. The news sent shock waves through Sacramento: “I’m not sure I’m ready — the institutional knowledge and the framework that it’s taken us to get here, I think is so incredibly important,” Assemblymember Cottie Petrie-Norris, a Laguna Beach Democrat, told Howle last month after she testified on the progress California’s beleaguered unemployment department had made on key reforms.

Howle became the first woman to be appointed California state auditor in 2000, when then-Gov. Gray Davis named her to the position. She was subsequently reappointed by Republican Arnold Schwarzenegger and Democrats Jerry Brown and Newsom.

CalMatters columnist Dan Walters wondered whether lawmakers — charged with recommending replacement candidates to Newsom — would “select a worthy successor who will maintain the office’s tradition of telling it like it is, not like politicians wish it to be.”

And Republican lawmakers — who make up a small minority of the California Legislature — are raising alarms that they will be shut out of the process altogether. In a Wednesday letter to Assemblymember Rudy Salas, the Bakersfield Democrat who leads the committee responsible for sending nominations to Newsom, seven Republican legislators asked that “one Democrat and one Republican from each house” be “assigned to a subcommittee to review applications, vet candidates, and make a recommendation to the full committee.”

“Government inefficiency, along with waste, fraud, and abuse, affect all Californians, so it only makes sense that this process should be open, transparent, and enjoy bipartisan cooperation from the start,” the GOP lawmakers wrote.

Committee staffers said Thursday that both Democrats and Republicans will review applications, vet candidates and decide which names will be sent on to the governor, but staff for Republicans said there was no statutory guarantee of a bipartisan process.

In recent months, Howle’s office — the only agency that under state law has full access to all records, accounts, correspondence, property and other files of any publicly created entity — has unleashed a series of blistering reports on California’s pandemic response.

Among other things, Howle and her staff uncovered rampant fraud at the Employment Development Department, inequitable distribution of federal relief funds among cities and counties, delays in getting federal rent relief to struggling tenants and homeless Californians, insufficient oversight of school districts’ use of federal relief funds, delays in delivering food assistance to vulnerable families, ineffective use of federal funds for COVID-19 testing and contract tracing, and mismanagement of federal money at the state’s prison oversight board.

In recent years, Howle’s office also found that California is unlikely to meet its ambitious climate goals, that the University of California admitted unqualified students based on wealthy connections and its Office of the President accumulated more than $175 million in undisclosed reserves, that the state’s “disjointed” approach helped cause the largest homeless population in the nation and resulted in the squandering of $2.7 billion for affordable housing, and that the state lottery failed to maximize funding for education.

This week, Howle sat down with CalMatters to discuss her 38-year career at the state auditor’s office, her blockbuster EDD investigations, the political pressures she’s faced, the most challenging organizations she’s worked with and the qualities she hopes to see in her successor. This conversation has been lightly edited for length and clarity.

CalMatters: “We wanted to get your thoughts on the last 30-plus years that you’ve been doing this … and what prompted this transition.”

Howle: “I graduated from Sac State in 1982 and I was struggling to find a job. And my brother actually had worked at the Capitol as a legislative staff. And he’s like, ‘Why don’t you work for the auditor general?’ … I got the job and I thought, ‘Oh, OK, yeah, I’ll learn about state government and then figure out what I really want to do.’ Because my real dream job was to be an athletic director at a major university. I was an athlete in college — soccer, basketball and softball. … Anyway, long story short, I tried. It’s the ’80s. How many women were getting jobs in collegiate administration in ’82, ’81? Forget it. … Anyway, I got out here, got the job with the auditor’s office and started working on some audits. This organization — it may sound, I don’t know, odd — but it’s like a family.

A few things prompted the transition — 21 years is a long time. I think it’s time for the next generation of leaders to take over the office. … There are a lot of people in this organization that worked here for a long time who I think are ready … for me to hand off the torch to them and have them run with it. And then just personal. It’s a demanding job, very difficult job, rewarding job. But, you know, I’m in my 60s now. It’s time to dial it back a little bit and enjoy life and have a little bit more balance.”

CalMatters: “I’m curious if in the 20 years you’ve been leading this agency, if any patterns have emerged among specific agencies or (political) parties that, you know, are maybe receptive or not so receptive to the things that you’re saying?”

Howle: “Of course, no one wants to get audited and be criticized, but all of the administrations consistently were receptive to the results of the work. … They didn’t necessarily like perhaps the tone of the report, the timing of the report, things like that. But I think they were all committed, and I feel the Newsom administration, same thing, is committed to trying to improve government in California.

It’s not an easy thing to do with big agencies like EDD. … The frustration that we have had — or I have personally felt — with that situation is we issued audits 10, 11 years ago about concerns we had with … their ability to process unemployment claims. We made some recommendations. Things weren’t implemented. Pandemic’s unprecedented, but … if you had made some improvements, perhaps the impact wouldn’t have been as bad on Californians as it has been. .. It’s gotten better, but it’s still a problem out there.” “Of course, no one wants to get audited and be criticized, but all of the administrations consistently were receptive to the results of the work.”

CalMatters: “Based on your audits of high-speed rail, do you have any thoughts about that project’s ability to succeed?”

Howle: “I think it’s been slow going. … We looked at that project over multiple audits and from one audit to the next, you’re seeing improvement, but not enough. You know, it’s been a long, long process and it’s just incredibly expensive. Nobody is going to suggest that high-speed rail is not a good idea, but the fact that the state has had to rely so much on contractors … Clearly, you need to rely on contractors for certain types of expertise, but we need to have our own control — state employee control — over certain processes.”

Howle: “Local governments are difficult because they’re not familiar with the state auditor’s office. Local law enforcement on occasion can be difficult, but … once they understand … how our process works, that they are going to have the ability to see a draft long before it goes public, then they start to settle down a little bit.

I would say one of the challenging audits was the University of California. … When we were conducting the audit we did a few years ago and we found out that the Office of the President was interfering with our ability to work directly with campuses, that was a major issue for me. … Most agencies don’t do that. … I think that’s the one and only time I ever had to inform anybody that an entity directly interfered with our ability to do our work independently.”

CalMatters: “You’ve been doing a lot of audits on the high-risk spending during COVID. … The state has this COVID lab that they built down in Valencia, and they recently auto-renewed this $1.7 billion contract for it, even though there have been a lot of reports about inaccuracies and problems. … There was supposed to have been a report investigating it, but then they didn’t release that report. I was wondering if you think that’s something that is worthy of looking into what’s going on, and also some of the other … no-bid contracts that the state has made during the pandemic.”

Howle: “I’m aware that there are no-bid contracts out there — I wasn’t aware of a contract that size that auto-renewed. Certainly, we have done an analysis of … all the federal money coming into California. … We didn’t look at no-bid contracts. Certainly, that’s something that the office could look at. … It certainly sounds like it … may be something that’s concerning, particularly if, as you say, there were some reporting requirements and those weren’t met.”

CalMatters: “You are pretty much the only person in state government that can be like, ‘You’re doing a bad job,’ and that’s your job to say that. And no one wants to hear that they’re doing a bad job. What are the political pressures that you may face behind the scenes?”

The minute anybody in this position agrees to, ‘OK, I’ll wait and issue it a week later,’ or, ‘OK, I won’t say that,’ the integrity and the credibility of this organization is destroyed, and we can’t afford to let that happen. And I hope my successor understands that that cannot happen.”

CalMatters: “Looking back on your long career here, what do you feel like has been your biggest accomplishment or proudest moment?”

Howle: “There’s a program that we audited like 10, 11 years ago. It’s called Every Woman Counts, and it’s a program … that provides mammography and cervical cancer screenings for low-income women. … We audited the program and we said, ‘Yeah, you could cut back on how much you’re spending on contracts, use some of that money to be able to provide more screenings.’ And so that’s what happened. And so, you know … I have no doubt there are some women out there who received those services whose lives were saved. … You’re looking at the efficiency of the program, but there are real people who are impacted by that. And that’s the rewarding part of the job for me personally, and I hope for my staff.

I’m really proud of how much this office has been able to — I don’t want to say influence — I suppose you could say influence public policy. We don’t make policy, but we’re giving the information to the administration, to the Legislature and to the public to hopefully affect change in California.”