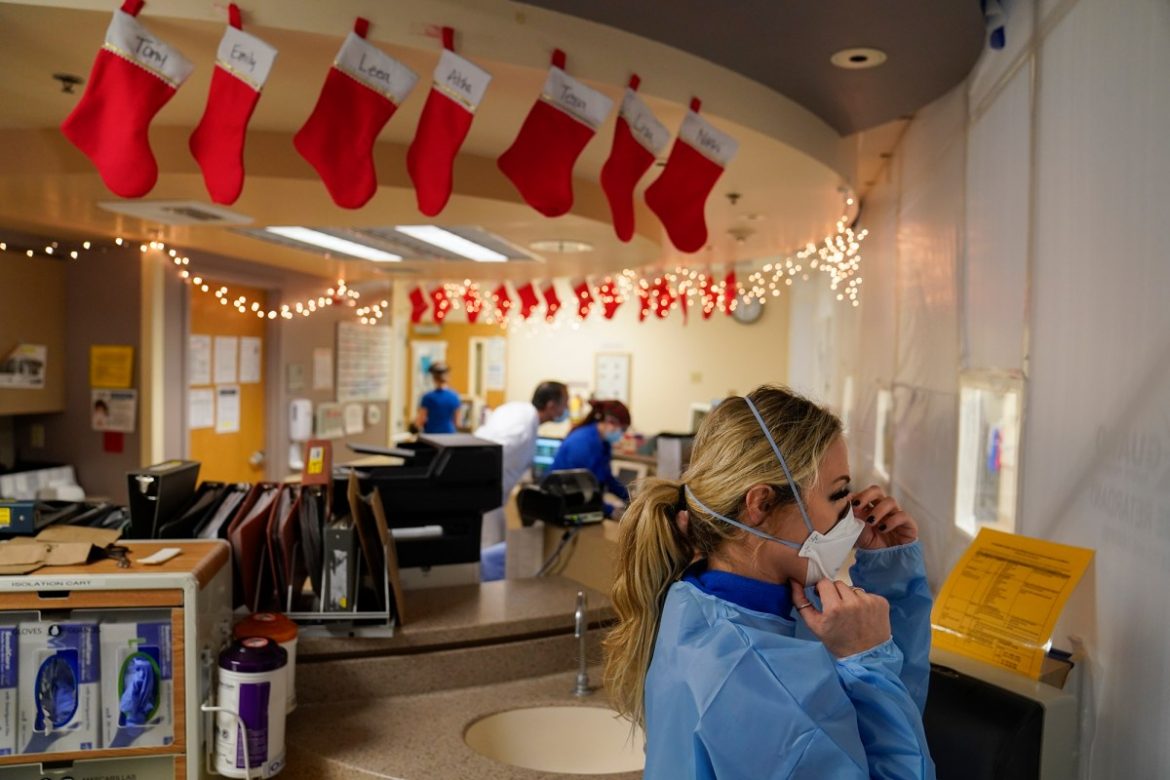 A few days before Christmas 2020, a registered nurse at Mission Hospital in Mission Viejo puts on her safety equipment before entering a room to check on a patient in a COVID-19 unit decorated with Christmas stockings. AP Photo/Jae C. Hong

The holidays are here and people are ready to gather, hug and feast. But is California in a better place this year when it comes to COVID-19?

Last year, as Thanksgiving approached, infections were creeping up, culminating in a brutal winter surge, and the governor implemented an emergency curfew to slow the spread of the virus.

Overall the state as a whole is now doing better than a year ago, before vaccines were available. But a closer look at each county shows that “better” isn’t the case for all: At least 18 counties have more hospitalized COVID-19 patients today than they did this time last year. Another five have just as many.

The vast majority of the ones faring worse are in the Central Valley and rural Northern California, which are still recovering from bad summer surges.

Humboldt, Madera and Lassen counties have the biggest year-over-year increases. In Madera, the 7-day average stood at 32 hospitalized patients on Sunday, compared to 13 a year ago. Humboldt had 11 hospitalizations on Sunday compared to three on the same date last year.

It’s a different — and far better — situation in California’s urban counties. Of the state’s 10 most populous counties, all except Fresno have fewer COVID patients in the hospital today than a year ago.

Los Angeles, Alameda and Contra Costa counties are reporting less than half of the COVID-19 hospitalizations of last year. San Diego, Orange, Riverside, Santa Clara, San Bernardino and Sacramento counties have about 30% less.

Last year’s winter surge was harsh for most of the state. But for some counties — including Butte, Humboldt, Mendocino, Shasta and Placer — this summer and fall were even worse. Some saw more patients hospitalized in summer and fall than they did last winter.

In the Central Valley some local hospitals are still strained. And experts say that’s a dangerous situation going into the holidays when another wave of cases is expected.

“We hope this surge, which we’re just trending down from now, is an indication that hopefully we won’t have another surge. But an increase in cases wouldn’t be terribly unlikely,” said Lisa Almaguer, communications director at Butte County Public Health.

At Kaweah Health Medical Center in Visalia, the seat of Tulare County, 73 COVID-19 infected patients were being treated as of Nov. 16. Although the number is high, Chief Executive Officer Gary Herbst said it is a welcome relief from the 100-plus infected patients hospitalized there since late summer.

“The Delta variant has been much more contagious, a bit more severe, where we are seeing more patients require critical care, require significant oxygen, unfortunately,” Herbst said. “In June or July, we literally only had four COVID positive patients in the hospital and were in a bit of a celebratory mood. But that quickly changed in August as we saw our numbers start increasing exponentially.”

According to the California Department of Public Health, from Oct. 24 to Oct. 30, unvaccinated people were 11.9 times more likely to be hospitalized with COVID-19 than those fully vaccinated.

Experts say the main driving force behind the increased hospitalizations in some counties is their low vaccination rate. Counties with a smaller portion of vaccinated residents are continuing to see higher hospitalization numbers. For example, Shasta and Merced have vaccination rates of about 50% and both have more COVID-infected people in their hospitals today than this time last year.

However, that’s not true for all counties: In Humboldt County, about 76% of the eligible population is at least partially vaccinated — about the same as the state’s average. But Humboldt also had more people in the hospital there this weekend than a year ago.

The reopening of businesses and return to normal activities may be fueling the infections in some counties.

“We’ve also been more open this year, that may be part of the explanation,” said Andrew Noymer, an epidemiologist at University of California, Irvine who focuses on mortalities during pandemics. With more activity and less masking, infections and hospital rates are likely to remain significant in those counties that have insufficient vaccination.

“In rural counties, population density ought to be a protective factor, but we’ve seen time and time again that rural locations are not spared. They might get hit later, but they can get hit hard,” Noymer said.

Noymer, however, is hopeful that most counties have seen the worst of it — either last winter or in the summer.  “But we do have some tough sledding ahead, and even if the worst is past us it doesn’t mean this winter won’t be tough.”

The number of new infections in most counties have been steadily declining since the summer wave.

Still, in 27 counties the 7-day daily average of new cases last week exceeded 10 infections per 100,000 people — a rate that once signaled widespread transmission and triggered the “purple zone” restrictions on businesses.

Compared to last year, however, infections are down in the vast majority of California. Only four small counties: Inyo, Mariposa, Mono and Sierra had a higher daily case rate on Friday than one year ago.

Fresno County health officials said on Friday that they are preparing for another potentially challenging winter. Hospitals there are operating consistently above capacity, and it’s often difficult to transfer patients to hospitals in other regions, said Dr. Rais Vohra, Fresno County’s health officer.

“If we need to transfer patients out to keep our hospital operational, we should really be able to do that with one or two phone calls. That’s not the situation right now, and that’s a point of frustration we’re hearing from multiple facilities,” Vohra said.

Nurse shortages, also, are an ongoing issue as nurses quit the workforce over labor concerns and burnout. At Kaweah in Visalia, Herbst said that there are 650 open positions at the hospital; 145 of them are for bedside nurses. Nurses are working four or five 12-hour shifts a week and Herbst worries that staff will burn out as a result of the extended summer surge, which leaves little time for recovery between now and the holiday season.

“They are exhausted, and that’s our number one worry,” Herbst said.

Local health officials are now pushing for boosters as immunity wanes and the holidays approach. While usually milder, breakthrough cases have been a growing concern in hospitals. In Fresno County, the share of those vaccinated who are hospitalized recently went from 5 to 10% of hospitalizations to 15 to 20%, Vohra said.

Despite some confusing messaging at the federal level about who “should” and who “may” get boosters, local health officials are encouraging boosters for all adults who completed their first series of shots more than 6 months ago, or 2 months for those who received the Johnson & Johnson vaccine.

“I would say for all practical purposes, boosters are not optional,” Vohra said.

One glimpse of hope: an uptick in people who are getting their first dose ahead of the holidays.

“Last week we saw 1.4 million people get a vaccine, 58% were for boosters, but that’s encouraging because 42% of folks were getting those first doses as well,” Newsom said during a vaccine event on Monday.

Some county officials also are optimistic that the hard summer could mean that natural immunity will offer some community protection — at least enough to evade another devastating winter.