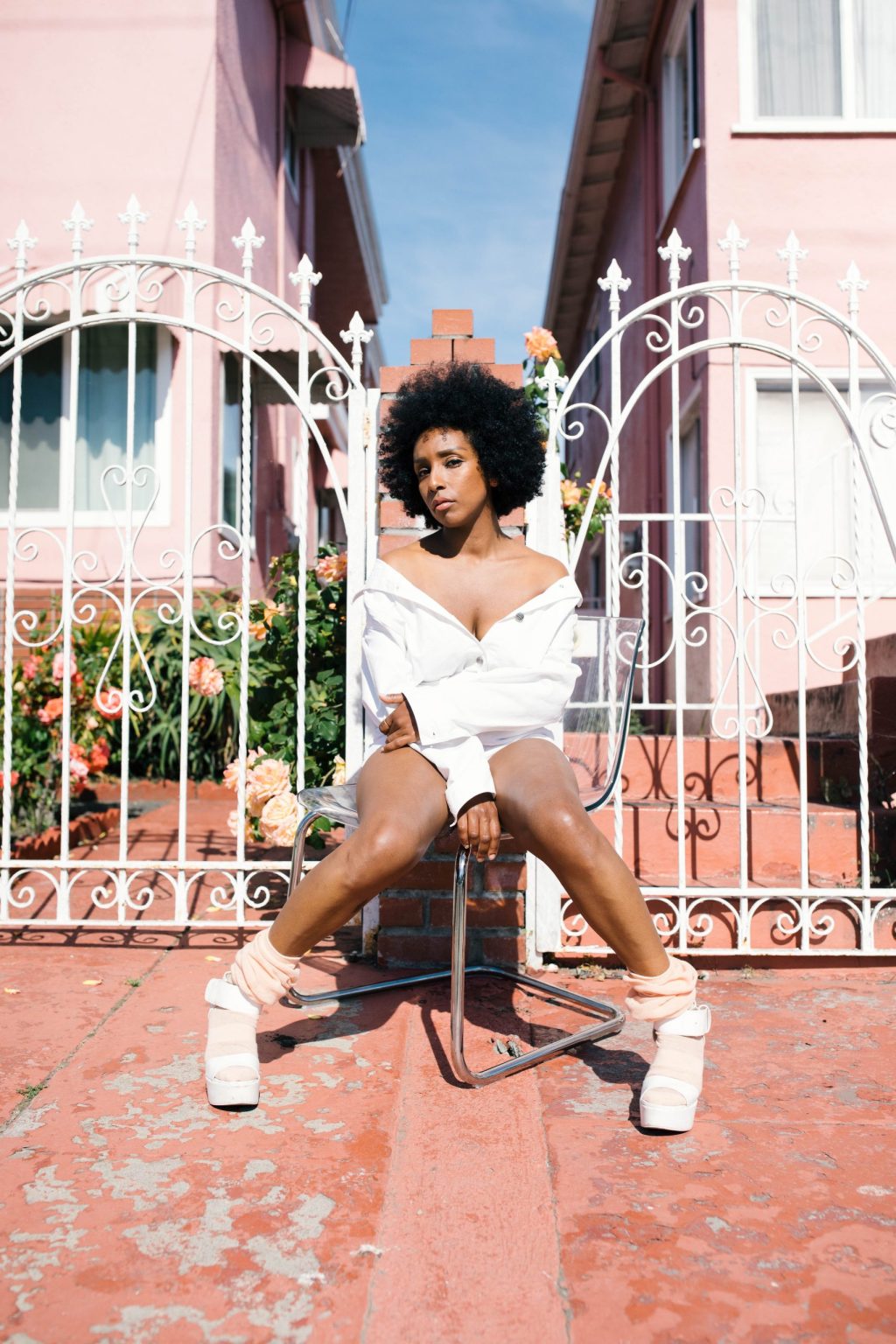 One of the crucial, often undervalued elements of a film is its soundtrack. A good one sets the tone and the mood, mirroring the goals of the filmmaker.

Pivotal to that often is the closing credits song. If done well, it can give you a lump in your throat or leave you feeling happy, perhaps contemplative.

Emeryville-based Pixar found an ideal Oakland musician/artist to create a song to match the spirit and style of their delightful, quietly revolutionary new animated short “Twenty Something.”

Astu’s song “Hold the Line” lyrically conveys the themes of the Disney+ release, part of the Pixar SparkShorts series.

“Twenty Something” finds a just-turned-21 Gia revisited by her younger, less confident selves when she enters a bar to celebrate that milestone day. It’s a funny but substantive short directed by Aphton Corbin that celebrates being a young Black woman, a group rarely represented in animated films in the past other than in caricature form, and the challenges of growing up.

This week, Pass the Remote talks to the multitalented Astu about being a part of the SparkShorts collaboration and how important it is for people of color to see themselves represented on screens, no matter their age.

We also highlight the documentary “Man in the Field: The Life and Art of Jim Denevan” from Santa Cruz-based filmmaker Patrick Trefz. It profiles a true Bay Area Renaissance man, a creative dynamo who not only makes elaborate geometric artworks on beaches but also has gained renown for his Outstanding in the Field tour, a farm-to-table dining experience. We also drop in on the Drunken Film Festival in Oakland and see what it has on tap.

But first, let’s first check in with Astu, an artist who was born in Tulsa, Oklahoma, moved to San Jose when she was 3 and came back to Tulsa for college. Astu’s music is a Spotify find, and her beautifully written songs are erudite, smooth, sensual, and soulful.

Originally, the Oakland-based R&B singer-songwriter’s music concentrated on faith-based songs since her formative years found her involved with the church. She also sang in her school choir and in her brother’s band. Astu underwent significant changes after she moved back to San Jose and followed her sister’s path to Oakland, a welcoming city that helped her find her voice. As she describes it, Oakland felt like home.

“I came here and not only was it the first time that I felt accepted and tolerated, but celebrated,” she says during a Zoom interview.

She gravitated to the electric and eclectic Oakland artistic scene, attending jam nights and open mic nights in the East Bay. She was impressed then and now at how supportive the Oakland community is to artists, and is grateful for the generosity she received.

“From that point, I started putting on shows for other artists, and one time a friend was like: ‘Why don’t you perform?’ I performed and that was it,” she says. “I am here today because of Oakland, for sure.”

She landed the Pixar gig shortly after opening an email from the animation giant.

“I was checking my emails one day, and there was a submission from my website,” Astu says. “And I looked, and it was from Pixar, and I was like: ‘Wait, what the hell?’”

Astu received the email after director Aphton Corbin requested input from the Pixar team on who would be a good local artist to tap to compose a song.

“They listened to me as well as other artists, and they loved my song ‘Reckless’ and thought the vibe was quite right for this,” Astu says. “And then they hit me up. I was like ‘Oh my God, how is this happening to me?’”

Astu saw a preliminary draft of the short, and it instantly resonated with her, particularly since the only animated film she can recall seeing wherein someone who looked like her was a main character was Disney’s “The Princess and the Frog” from 2009.

What also resonated was the theme about being in pieces — the 21-year-old Gia in “Twenty Something” is visited by her 1-year-old, 10-year-old and 16-year-old selves.

“That’s a lot of what my work is about, about being divided into pieces and how do those pieces make up the whole,” she says.

Working with Pixar came at a particularly relevant and appropriate time in her life as she was puzzling together her own identity.

It was six years ago when Astu ventured into her solo career and began to see those pieces fitting together.

“This transition had a lot of things going on (for me),” she recalls. As she pursued her own dreams, her true voice came out. “I was like, one day, that girl’s going to come out.”

The last two years challenged her with a family illness and mental health issues. But it also paved the way for her becoming more in tune with her sexuality and being the artist and person she is now. Astu identifies as gender expansive and uses she, they and he pronouns.

“I can be one person who just looks different and feels differently than anyone else,” she says. “I don’t have to have these different labels.”

Another facet of Astu’s expanding career is the creation of her own Oakland-based label, Boyish Records. She and co-owner Kevin Shaw have made it a goal to help nurture and lift up the careers of other East Bay musicians. They have created a school and creative house via their label.

This August, they invited 14 young artists to Camp Boyish, an intensive and enriching experience that led to the creation of five songs, which will be released on their label. They’d like to see more Boyish camps created nationwide but are currently concentrating on holding creative jam sessions quarterly in Oakland. They’re also seeking sponsorships.

It’s a program that holds special meaning to her, Atsu says.

“Even that one little spark can set that off for an artist,” she says. “To even call yourself an artist is so hard. It took me like 10 years to call myself an artist. I’m just hoping that Camp Boyish provides resources and creates community and sparks something in people.”

“Twenty Something” is now available to stream on Disney+.

In “Man in the Field: The Life and Art of Jim Denevan,” Santa Cruz-based filmmaker Patrick Trefz shows compassion and appreciation for his intriguing, enigmatic subject. He shifts back and forth from Denevan’s great passion — making geometric artworks on sandy beaches — to the culinary and his farm-to-table national tour, Outstanding in the Field.

“Man in the Field” does an incredible job of illustrating what drives Denevan and sensitively addresses the specter of mental illness and how a fraught childhood shaped and inspired him. It’s a remarkable portrait about a remarkable individual.

“Man in the Field: The Life and Art of Jim Denevan” is in select theaters and is available on demand.

Finally, if you prefer tossing back your entertainment with liquid libation, the fourth annual Drunken Film Festival ponies up to select bars starting this Sunday in Oakland. Not feeling comfortable about hitting the local tavern? Streaming selections are also on tap.

Some of the titles and filmmakers have roots in the Bay Area, and the films have themes that swivel from funny to serious. Here’s a rundown on which bars will play host.

The majority of the Oakland program is set to stream on Twitch (DrunkenFilmFestOakland).

The program is free. Proof of vaccination and masks required at all events.

For a complete schedule of films, visit https://www.drunkenfilmfest.com/oakland-2021-program.